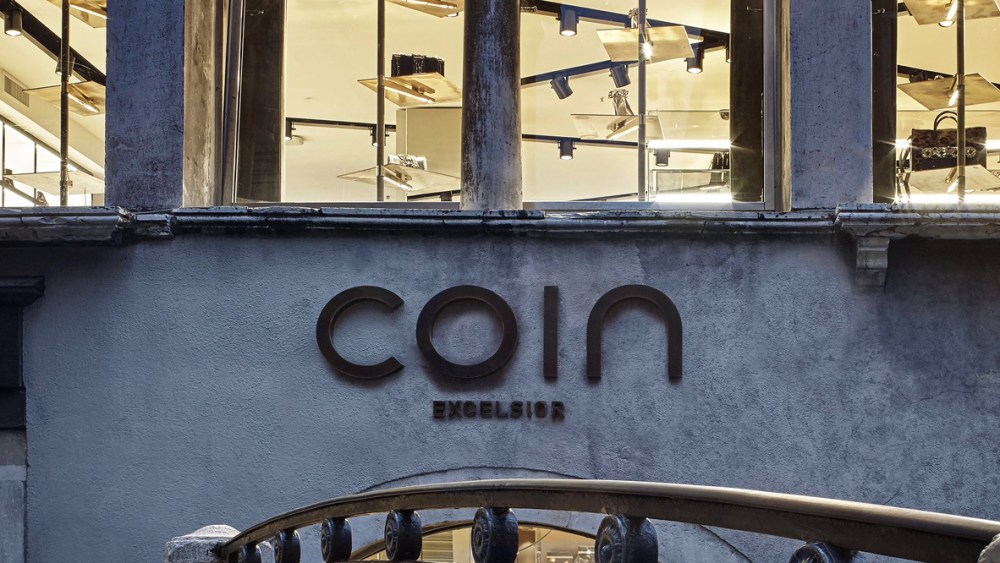 Coin Group has transformed its store located in Venice’s Cannaregio district into a Coin Excelsior unit, investing 3 million euros, or $3.42 million at current exchange rate, in the project.

This is the second Coin Excelsior store opened by the Italian company, which last year inaugurated a unit in Rome.

The nearly 23,691-square-foot space has been completely redesigned by Milan-based studio Vincenzo De Cotiis Architects, which mixed simple materials like concrete and iron with metallic details and Venice’s traditional glass pieces. Artist Felice Limosani also created a dynamic installation mixing lights and mirrors inspired by Lev Tolstoj’s quote “If you want to be happy, be.”

“The idea behind the Coin Excelsior format is that, differently from the Coin brand, it targets customers who are looking for wearable things, but who seek contemporary, more unique products,” said Coin Group chief executive officer Stefano Beraldo. “The selection of brands is not focused on luxury labels, but on those that have a contemporary offering with prices which are high but not crazy.”

The first floor carries a wide selection of beauty products from international brands, spanning from Chanel and La Mer to Jo Malone and Byredo, as well as a selection of accessories, especially bags by Alexander McQueen, Lanvin, Proenza Schouler, Victoria Beckham, Paula Cademartori, 3.1 Phillip Lim, among others. This level also features a corner dedicated to Salvatore Ferragamo’s fragrances, eyewear and watches.

On the second floor, a wide selection of shoes, such as Jimmy Choo, Gianvito Rossi, Adidas, Nike, Gianni Versace and Sebastian styles, finds place next to women’s ready-to-wear pieces from trendy, upper contemporary labels, including MSGM, Kenzo, Isabel Marant Étoile and Helmut Lang, among others.

A bigger women’s wear selection is on display on the third floor carrying brands such as Pinko, Armani Collezioni and Lauren by Ralph Lauren, while the fourth level is entirely dedicated to men’s wear with labels including Hugo Boss, Z Zegna, Dondup, Jacob Cohen and Slowear, to name  a few.

The last floor is occupied by Coin’s in-house home collections.

According to Beraldo, since the new Coin Excelsior store opened earlier this month, the average purchase, which is valued at 120 euros, or $137, rose 50 percent compared to the previous Coin shop.

The same increase was registered in Rome, where the fashion segment of the Coin Excelsior store generated revenues of 47 million euros, or $53.64 million, in 2014.

“Considering the crisis which hit multibrand boutiques and the difficulties of monobrand stores, I think department stores represent the only good options for fashion labels,” said Beraldo, revealing that the company aims to open four Coin Excelsior units in Italy within a couple of years. Locations include Trieste, Naples, Rome and Milan. “We will also expand the format abroad,” he said, citing Russia and China as the most appealing markets for Coin Excelsior.