The most popular segment in the brand's Tougher Together series was with singer Luke Combs, which was viewed more than one million times.

Columbia Sportswear reopened 30 of its U.S. stores in 10 states on Friday, bringing back more than 250 of its furloughed retail employees.

Along with nearly every other retail location except those deemed essential, the Portland, Ore.-based outdoor brand was forced to shutter its 143-unit fleet of full-price and outlet stores in mid-March during the coronavirus pandemic shutdown.

Columbia successfully reopened a store in Nebraska last week, which led the company to roll out the process to other units in states and communities where it is allowed.

All employees in the reopened stores will be required to wear face masks, store layouts will be adjusted for proper social distancing and restocking of clothes tried on in dressing rooms will not be put back on shelves for 24 hours, the company said.

Throughout the shutdown, Columbia kept its U.S. distribution center and call center in operation to serve customers shopping via e-commerce.

And with many people staying home and not venturing out too often, especially for recreation, Columbia pivoted to a message to encourage customers to share their stories and memories of outdoor adventures, even when “it’s best to stay home and stay healthy,” according to its web site.

A big part of that was the creation of Tougher Together, an Instagram Live series featuring several of the brand’s ambassadors and athletes. The series kicked off in April and included question-and-answer sessions with professional skiers, trail runners, anglers and golfers.

The most successful of the seven done so far, according to Joe Boyle, Columbia Brand president and son of its chief executive officer Tim Boyle, was with Luke Combs. The country singer and his fiancée Nicole Hocking answered questions from their Nashville home and Combs sang three songs including two previously unreleased cuts and his latest COVID-19-related tune called “Six Feet Apart.” 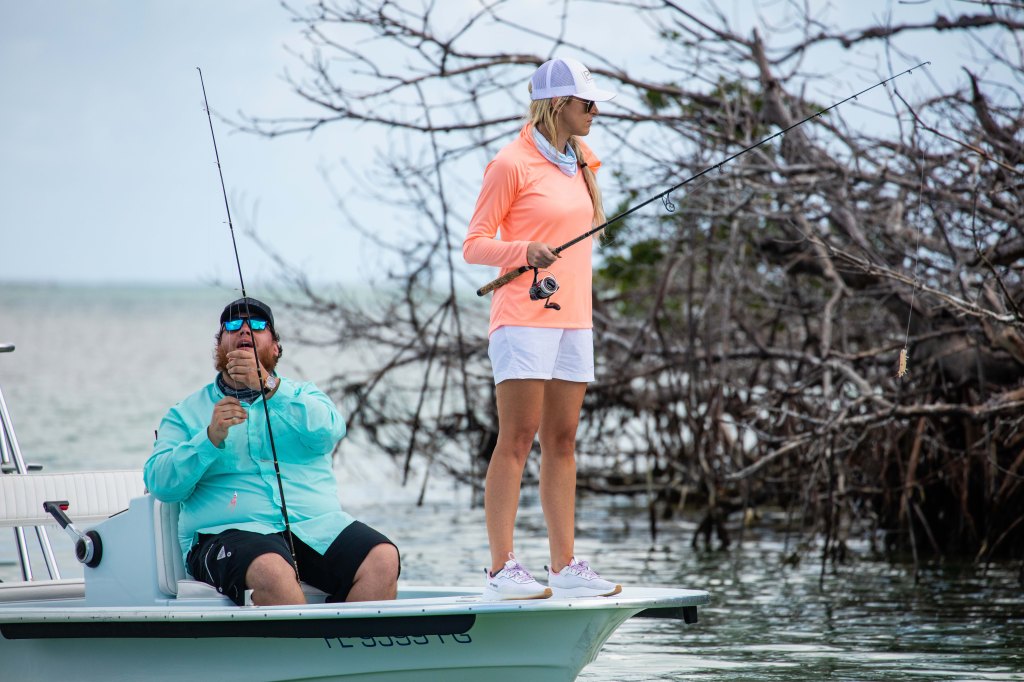 Luke Combs and his fiancée Nicole Hocking are fishing fans.

“We’ve exceeded one million views as of today,” Boyle said, “which really exceeded our expectations.”

The Combs session included an opportunity for viewers to get discounts on Columbia products. The singer has been an ambassador of the brand and its PFG fishing collection since 2018 and said during the livestream that he had close to 40 of the brand’s Bahama II black shirts in his closet and nearly always wears them while performing.

His performance was also meant to commemorate the 25th anniversary of the brand’s performance fishing collection, Boyle said.

Boyle declined to say how much merchandise was sold as a result of the Tougher Together series, but said the company views it more as “the future of how we engage with the consumer. The pandemic has forced our content to be more digitally integrated and we see ourselves doing more things this this going forward.”

In mid-April, Columbia said it drew down $375 million from its total credit line of $631 million in order to bolster its operations during the pandemic.

Boyle said he’s optimistic that Columbia will be able to move forward from this downturn. “We’ve been around 80-plus years and this is a challenging time, but we’re very optimistic. We will continue to make innovative product for people who want to get outdoors. We’re an accessible and authentic brand and we see great opportunities going forward.”