Proceeds from the sale of the line go to fund the Compton Junior Equestrians.

The Compton Junior Equestrians benefit from the new Ariat collection.

The Compton Cowboys’ mission has been the same for years, but with the heightened awareness to racial inequality in this country, that message has been amplified.

With roots that stretch back more than 30 years, the group of lifelong friends has worked to create a community by embracing the horseback and farming lifestyle while at the same time shining a spotlight on the legacy of Black Americans in equine and Western heritage. Its tagline is: Streets Raised Us, Horses Saved Us.

And to further support the cause, the Cowboys have inked a deal with Ariat, the 27-year-old, female-founded and -run Western and equestrian company, for a collection of apparel and accessories.

Compton, a community in southern Los Angeles county, was the setting of a 2015 biographical drama, “Straight Outta Compton,” that depicts the rise and fall of rap group, N.W.A. That title has since become part of common vernacular and even the Compton Cowboys use a variation on the name, describing themselves as Straight Outta Richland Farms.

Richland Farms is an agricultural community in Compton and Mayisha Akbar, a successful real estate broker from Los Angeles who grew up in a government housing project, purchased the land in the Eighties to satisfy her love of horses and the quest for a rural lifestyle. Her own son had been shot as he rode his bike between gang territories and Akbar had a choice to make: leave Compton or stay and fight to change it.

In 1988, she created the Compton Junior Posse to provide local children with an alternative to life on the city’s rough streets. One of those children was her nephew Randy Savvy, now head of the Compton Cowboys. 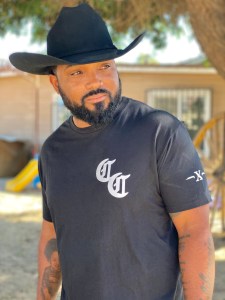 Randy Savvy of the Compton Cowboys.

“It was like the Wild West,” he said of the city of Compton at that time. “Anything that could be wrong in the community was: police brutality, crime, corruption — it was a pool of negativity.” Compton has one of the highest per capita crime rates in the country and has been deemed the most dangerous city in California.

Savvy matter-of-factly said that without Richland Farms, many of these kids would end up in gangs or on drugs and drop out of school. And it’s the Compton Cowboys’ goal to stop that spiral by providing inner-city kids with a positive alternative. “It’s our duty to pay it forward to the next generation,” he said.

Today, the ranch is home to around 17 horses and spans more than two acres, providing an oasis for the youth of Compton. “It’s a beautiful space for them to come,” Savvy said. “For kids in an urban landscape, to have an outdoor, natural space is really therapeutic.”

Susan Alcala, vice president of partner marketing for Union City, Calif.-based Ariat, said her brand was originally introduced to the Cowboys by one of its sponsored athletes. The company was so impressed with the work the group did that it reached out and they’ve been working together for several years.

“They really incentivize kids not to form gangs and to stay in school,” she said. “They’re really passionate about that and it resonates with our community and values, too.”  Those talks led to Ariat exploring a “more tangible way to celebrate our partnership,” she said, hence the creation of the Compton Cowboys collection.

The initial offering consists of a jacket, T-shirt, hat and face mask, and sales so far have been better than expected. Prices range from $15.95 for the mask and $29.95 for the T-shirt to $129.95 for the jacket. And 100 percent of the net proceeds from the line are donated to the Compton Junior Equestrians, the 2020 version of the original Compton Junior Posse. “Posse sounds edgy and Western,” Savvy explained of the name change. “But Junior Equestrian sounds more welcoming.” 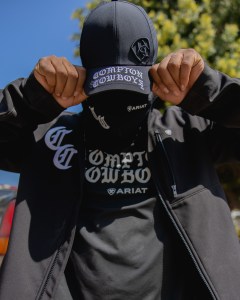 Going forward, Alcala said Ariat expects to more than double the number of pieces it creates for the Compton Cowboys collection.

It is “very bold and brave” for Ariat to partner with kids from Compton, Savvy said, adding, “A lot of companies are afraid, but Ariat had no hesitation.”

In addition to its work with the Junior Equestrians, the Compton Cowboys also strives to publicize the legacy of Black cowboys.

“The popular culture image of a cowboy is John Wayne or the Marlboro Man,” Savvy said. “A white guy in a cowboy hat and spurs. But we’re here to say that we grew up around Black cowboys. In our streets, there are all Black and brown cowboys.”

In fact, it’s estimated that one in four cowboys was Black and these men played a key role in settling the West after the Civil War, a historical fact that the Compton Cowboys seek to publicize with their efforts.

The Cowboys have also been visible of late in the recent Black Lives Matter protests in their community. Savvy said between 75 and 100 men and women on horseback were part of a peaceful march in June to protest the killing of George Floyd. Despite the large crowd, the horses stayed calm, as did the riders, he said, and provided a “sense of peace and pride, love, togetherness and unity.” 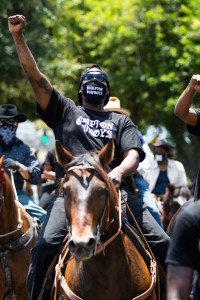 The Compton Cowboys were quite visible in a march in June.

Looking ahead, Savvy said he has ambitious goals for the Compton Cowboys. It’s his life’s work to take the business model that has been created in California and replicate it in communities across the U.S. and beyond its borders.

“If I can look up and see 50 ranches around the world in underserved communities in different geographical areas, it will make me feel like I did what I could as a human being,” he said. “I deeply believe horses will be leading the cure to our cultural and racial divide. They can help us heal and move forward.”