Called Converse Shapes, the collection was designed for different body shapes rather than genders.

Looks from the Converse Shapes collection.

NEW YORK — Converse is embracing the movement toward nonbinary fashion by introducing a genderless apparel collection for the first time.

Called Converse Shapes, the line of sportswear — T-shirts, hoodies, sweatshirts and chinos — was designed for different body shapes rather than genders. The initial launch, which is slated for fall, encompasses five pieces in four sizes with detailing such as gussets, pleats and elastic waistbands that can expand and collapse to fit a wide variety of consumers. Apparel designed for men and women generally offer 14 sizes, seven for each gender.

In a presentation here Tuesday morning, the Boston-based brand unveiled Converse Shapes along with several other innovations it will introduce in 2020 and beyond.

Converse was founded in 1908 as a rubber shoe company in Malden, Mass., but today, the Nike-owned brand is best known for its Chuck Taylor sneakers. Those sneakers were the launching point for most of the “reimagined” footwear and apparel launches planned for this year and beyond, the company said.

“We’ve always been a progressive brand, but as we enter a new decade we see an incredible opportunity to push the boundaries of our own design and product ethos,” said Phil Russo, global vice president of design and innovation.

Brandis Russell, vice president of global footwear, said Converse sought to pay homage to its heritage while pushing forward to address the needs of today’s customer. In footwear, that translates into Converse CX, a “tool kit” of materials and processes that addresses the desire for comfort, flexibility and durability. 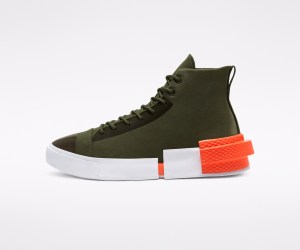 “CX allows Converse to deliver on both new expression and experience through the lens of comfort,” Russell added. “In time, we plan to integrate its elements into every footwear product we make.”

On March 12, Converse’s longtime collaborator and streetwear innovator TakahiroMiyashita TheSoloist, will introduce the shoe that he teased on the runway last season in Paris through the Converse x TheSoloist All Star Disrupt CX, a black-and-white iteration. That shoe will sell for $150. 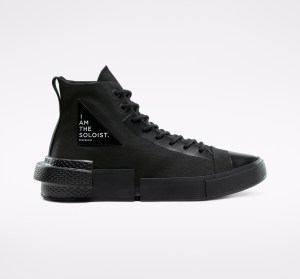 Other silhouettes in monotone colors — black, white or olive green — will be introduced on March 19 at Converse stores, online and select global retailers.

Interestingly, the Chuck Taylor sneaker was also the inspiration for the Shapes collection, according to Lindsay Degen, apparel designer. “We started with the icon, the Chuck Taylor,” which was the first inclusive and genderless footwear. “We wanted to do that in apparel.”

So in addition to offering models and sizing to fit all body types, Shapes also addressed another issue of upmost importance to its young customer base: sustainability. The collection is made from 50 percent recycled cotton and 50 percent organic cotton and the cut of the garments results in markedly less waste.

“We are the brand of youth culture,” said Jonathan Tappan, vice president and general manager of apparel and accessories for Converse. And the goal with both Shapes and the company’s other collections is to “leverage our equity in sneakers to apparel.”

Although he declined to say how much of Converse’s business derives from apparel, he said the category is “making significant traction” for the company as a whole.

Tappan said he has especially high hopes for Shapes. “When starting design from a nontraditional place, there are endless opportunities to reimagine everything from construction to sizing to materials,” he said. “Shapes is the perfect example of how to meet the consumer in their element. By bringing functionality, inclusivity and comfort to everyday clothes, we believe we can really change the game.”

In addition to Shapes, Converse will also introduce two other apparel collections for fall, Utility Fleece, a line geared to the skate community with a triple zipper design on its jackets, as well as Court Ready, an updated line of basketball-inspired designs intended to take customers “from class to the court to the street,” Tappan said.

Converse has been increasing its focus on basketball in the past couple of years and last week signed three-time NBA Champion Draymond Green as its newest ambassador, joining Kelly Oubre Jr. of the Phoenix Suns. The brand has designed a new G4 model for Green in partnership with its parent company, that it quietly showed at the presentation. The colorful shoe with the Nike Reach cushioning in the heel and Nike Air Zoom in the forefoot will debut later this year in high- and low-cut versions.

In fiscal 2019, sales of the Converse brand were up 1 percent to $1.9 billion but earnings before interest and taxes fell 2 percent to $303 million.

When reporting second-quarter results for fiscal 2020 on Dec. 19, 2019, Nike Inc.’s then-chairman, president and chief executive officer Mark Parker said much of Converse’s growth was being fueled by its international business, specifically the Asia Pacific region, led by China. The impact of the coronavirus is sure to have had an impact on business in that area since then.

Turning to the North American market, Parker said at that time that the goal for the Converse brand was to close some “gaps” in the market by expanding the product offering beyond the Chuck Taylor and increasing the brand’s reach in basketball. “We’re looking at running and some other dimensions of the Converse footwear portfolio, apparel as well. We are seeing, by the way, strong growth in North America for Converse in the digital space, so we think that’s a sign of some optimism for us for Converse in North America going forward. And I think the expansion of our digital platform for Converse is going to be a driver globally certainly led currently by China, but we’ll start to see that happen more and more in North America and for Europe.”