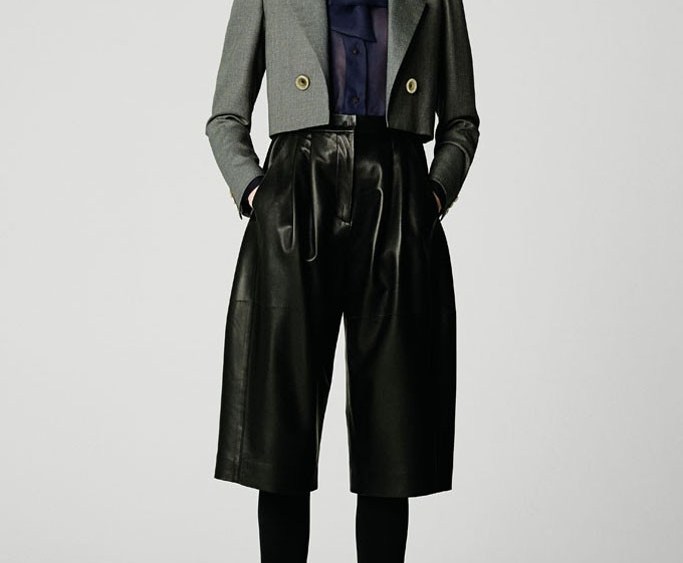 MADRID — There’s a new kid on the block.

Called Pedro del Hierro Madrid, the women’s-only collection is “very couture, contemporary, a dialogue between past and present, and textile-conscious with an emphasis on Spanish culture,” explained the 38-year-old March, who was wearing a snap-closure vintage Japanese shirt bought in Paris, cropped white pants and trainers. “We have to focus on our woman, her core and her culture. We’re not talking muse here — but an abstract concept and what that means ethically and aesthetically.”

For her first outing for fall, shown at a still-life presentation in the Spanish capital’s Matadero cultural complex, March featured spare, tailored silhouettes in autumn colors like copper, brown and mauve; simple black dresses with a stronger shoulder and demure lengths; cropped pants, and slim, long coats. Soft evening looks included jumpsuits and pajama styles in luxury see-through fabrics “or how to look fabulous and be comfortable at the same time; we don’t have time for complicated stuff.” The no-fuss clothes are for real women “and they’ll age well,” she added.

The winter range is made up of 40 styles and a small grouping of handbags, belts and shoes, “short and refined because it’s not the time for extremely long collections,” said March. Spanish references include bolero jackets, capes, leather and ruffles. “People say the bolero is so Saint Laurent. My answer to that is, ‘No, it’s so Spanish.’ I’m proud of our culture; Spanish folklore, especially the women, is very powerful. When you look at the portraits of 17th-century Spanish women in the Prado, you see that we developed minimalism,” the designer said.

March phased out her namesake ready-to-wear brand, including two stores in Madrid’s shop-heavy downtown Salamanca neighborhood, in June 2010 when the country’s economic ills began to erupt. Moving back to her native Mallorca, she took a few years off to care for her two young children and bake bread. She was tapped by Cortefiel last summer.

“It’s a very beautiful project” and with obvious respect for the heritage of the house, she said, “Pedro del Hierro started in 1964, the year I was born. He is an Eighties icon, a fantastic couture designer who worked with Manuel Pertegaz. We’re trying to go back to the origins of the brand — and with Cortefiel, we have the muscle behind us. So many doors are open because of them.” Cortefiel’s retail stable includes Springfield, Women’secret and Fifty Factory.

Distribution for the new line is expected to come through “almost everywhere we have shops.” Currently, the more volume-conscious Pedro del Hierro women’s-men’s brand sells through 414 points of sale — mainly Cortefiel corners — in 28 countries, said marketing director Fátima Doñoro, and on the drawing board is an ambitious international expansion plan that includes 300 openings in China within the next four years.