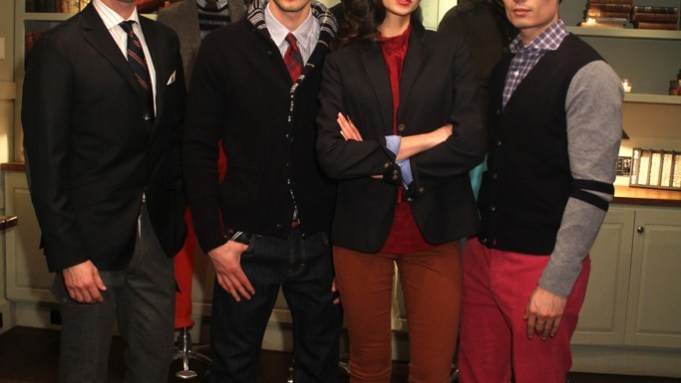 Stephane Cremieux has taken the plunge.

The son of French designer Daniel Cremieux has relocated to New York City, opened a showroom on Mercer Street in SoHo and is ready to start showcasing the company’s Cremieux 38 premium-priced label to American retailers.

“We’re not only celebrating the opening of an office,” Cremieux said, “but the launch of the line we produce in Europe to the United States,” he said during a cocktail party at the Soho House Tuesday night.

Cremieux’s Blue label, which showcases a European preppie sensibility, has been exclusive to Dillard’s in the U.S. for the past 12 years. The Little Rock, Ark.-based retailer will add the Cremieux 38 collection to the top 10 percent of its stores, or around 26 units, for fall, Cremieux said.

“It’s been a great partnership,” said Vicky Mason, the men’s merchandise manager for Cremieux at Dillard’s. “It should be good for our stores.”

Cremieux called the addition of Cremieux 38 “a new avenue” for the company, which was founded in 1976 in Saint-Tropez and now has annual sales of about $150 million worldwide with distribution in France, Spain, Portugal, Greece, Asia and the Middle East. The Cremieux 38 line features “elevated quality and details,” he said, but the fit will remain the same. “We don’t like extremes,” he said. “We want our customer to look good.”

Pieces include corduroy slacks in vivid colors such as red, sweaters with piping, slim neckwear, jeans and woven shirts. “We’re classic people,” he said. “We’re all about nice fabrics and sartorial styles — classics with a fun twist.”