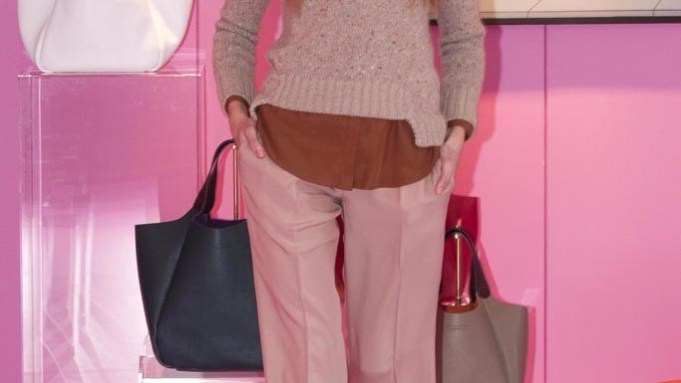 MILAN — Cruciani’s lace bracelets have been setting a trend globally and now the company is further expanding the brand with a total-look apparel collection, which was unveiled here Tuesday.

“The company is enjoying increased visibility and this helped us introduce to retailers a modern, creative yet practical and functional fashion collection,” said Cruciani founder and chief executive officer Luca Caprai. “This is a moment in time to be more concrete and the collection is in line with our brand.”

Inspired by Lauren Hutton, the lineup has a Seventies feel, with loose pants and silk bow-tie neck blouses in a powdery color palette and soft cardigans belted at the waist. A full round skirt in burgundy contrasts with an orange V-neck knit — the latter, Cruciani’s core business. “I expected to see a 5 percent gain at the most in ready-to-wear, but, on Feb. 14, two-thirds into the sale of the fall collection, it was up 65 percent,” he said proudly.

The rtw collection isn’t the only development at the company: The brand opened a shop-in-shop at Barneys New York earlier this month. Grateful for the opportunity to display a comprehensive array of macramé bracelets embellished with four-leaf clovers, stars, hearts or butterflies at the tony store, which also carries Barneys special-edition pieces, Caprai said, “It’s like winning an Oscar.” Barneys is also the only unit in the U.S. to sell Cruciani’s Mickey Mouse bracelets.

Caprai said that, in addition to bracelets featuring the American flag, he has created limited-edition pieces for Valentine’s Day, Mother’s Day and Thanksgiving, among others. The firm has tied up with Italian jeweler Damiani for a series of bracelets embellished with diamonds that are also available at Barneys.

Under the Cruciani C moniker, the company has sold nine million bracelets since the launch in 2011, with the opening of dedicated stores around the world, from Milan and Capri, Italy, to Madrid, Seoul and Dubai. An average Cruciani C bracelet costs 10 euros in Europe and $15 in the U.S. “Our products must cost the same globally and the customer must know that he is paying the same price whether in Milan or New York. Why should the customer have to bear the cost of taxes or shipments?” he said.

In addition to its knitwear collections, Cruciani has an accessories division and Caprai touted the performance of the brand’s bags. “We’ve passed from selling 300 to 16,000 units in three seasons,” he remarked.

The Cruciani C project has contributed to brisk growth at parent company Maglital Srl, based in Italy’s Umbria region, and the company has increased its workforce by 20 percent, adding 100 employees in 18 months. Sales in the 2012 fiscal year are expected to jump 53 percent to 30 million euros, or $40.3 million at current exchange, compared with the previous year.

In addition to its own Cruciani Palm Beach boutique, the brand is available at retailers such as Bergdorf Goodman in New York, Stanley Korshak in Dallas and Adelaide Ltd. in Chicago.