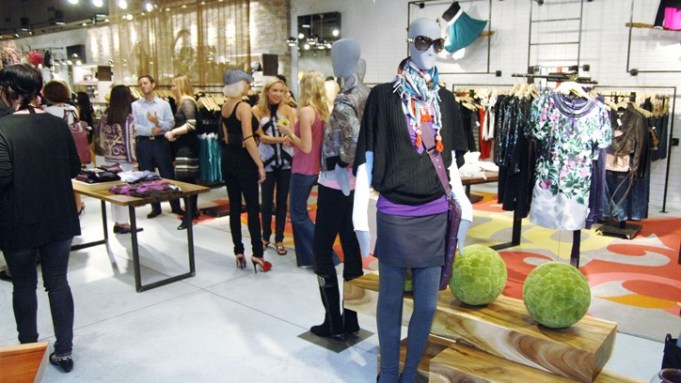 CHESTNUT HILL, Mass. — For its fifth store, Cusp has been renamed Cusp by Neiman Marcus, underscoring the contemporary concept’s link to its luxury retail parent.

“We found that with our customers who didn’t already know, [the name change] improved their perception and their interest in the store,” said Russ Patrick, managing director of Cusp by Neiman Marcus. The name also will be tested at the sixth store, which opens in Chicago’s Water Tower Place in November.

The 5,950-square-foot store here is about five miles west of Boston in the Mall at Chestnut Hill, where competitors such as Barneys Co-op and Bloomingdale’s also operate.

Cusp’s merchandise mix is that of a specialty store — everything from cocktail dresses to shoes, cosmetics to intimates. The company declined to give a sales projection.

Compared with the more formal ambience of Neiman Marcus, Cusp by Neiman Marcus wants to be welcoming and touchable. There are dense racks of merchandise, open-sell cosmetics, bowls of accessories and full-length wall mirrors for quick assessments.

“We love the contemporary business,” Patrick said. “We want to continue that specialty store vibe and not take ourselves too seriously.”

For its Boston opening party on Aug. 28, women age 13 to 60 shopped actively, including many mother-daughter pairs. Matt & Nat, a line of vegan handbags made of rice paper sold well, as did Stella McCartney for LeSportsac bags and LnA leggings.

Cusp by Neiman Marcus is still being tweaked. The Chestnut Hill store pulls “best of” practices from the other four locations and experiments with new ways to sell.

Instead of a denim wall, for example, the store is the first in the chain to try denim hung by silhouette on racks with coordinating tops. Each section is labeled: skinny, straight, boot-leg and flared.

The accessories section takes up the middle third of the store — bigger than other locations, Patrick said. Vendors include Manolo Blahnik, L.A.M.B. and Ash for shoes; Tory Burch, Cynthia Rowley and Andrew Marc for handbags.

Jewelry also has been increased to reflect this season’s emphasis on it.

Casual clothing sits in the back third of the store, while dresses, eveningwear and collection merchandise fill out the front.

Contemporary stalwarts like Theory and Diane von Furstenberg are represented along with newer lines like LnA, Millard Fillmore, Twenty8twelve and Blake Standard.