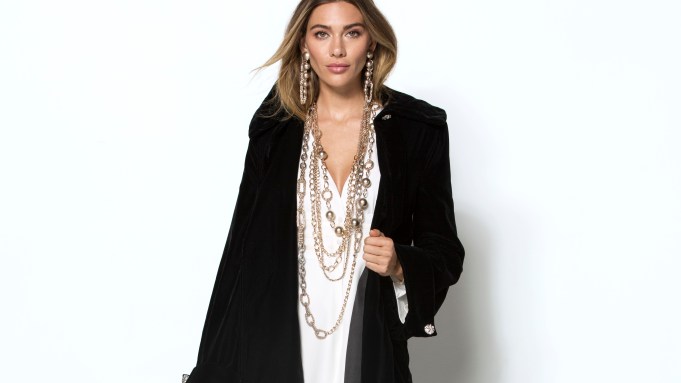 The singer, songwriter and actress has inked a deal with HSN Inc., under which she’ll design women’s apparel, jewelry and footwear. She will launch A Touch of Cyn during a two-hour special during The List with Colleen Lopez on Oct. 26.

“Honestly, I was approached all through the Eighties to do a line,” said the 64-year-old Lauper in a telephone interview. She said her uncle was a successful pattern maker on Seventh Avenue and she went to the High School of Fashion Industries “but flunked out.”

“I have dealt with clothes all of my life. I love fashion and this line is a nod to my favorite century of fashion — the 20th century,” said Lauper, whose 1983 version of “Girls Just Want to Have Fun” was her breakthrough hit.

Simply put, Lauper said she wanted to do something with HSN for women “who are forgotten.” She wants to design clothing that accentuates women’s good points and minimizes the bad.  “These women are left out of couture,” she said, adding that this customer loves clothes, but there’s nothing out there that makes them feel elegant.

Lauper’s 11-piece apparel collection is available in a classic color palette including red, white, black, and ivory, as well as floral print and leopard. Prices range from $39.90 for a graphic T-shirt to $249.90 for a velvet coat with oversized collar. Her six-piece jewelry line features gold tone and silver tone pieces that range in price from $39.95 for link drop earrings to $79.95 for a long two-tone chain necklace. Lauper has also designed two footwear silhouettes, which are a lace-up bootie for $129.90 and a mule for $79.90.

With shoes, she didn’t want to design pointy things. “How do you make a shoe that’s comfortable, that’s still sexy? I just did a whole freakin’ show about ‘Kinky Boots.’ I had to write the song, ‘The Sex is in the Heel.'” Lauper won a Tony award for best score for “Kinky Boots.”

Her target audience is a woman from 45 to 65, or maybe older. “Nowadays, you can’t define a woman by age. It’s not age because guess what? We’re not really cars, and you don’t need to check the tires or look under the hood to check the miles. It’s how the car runs,” said Lauper.

One of her items for HSN is a moto jacket with fake fur collar. “Nobody gets hurt. It’s not real leather. Nobody died for this one,” she said. She recalled in 1985 when she bought a Jean Paul Gaultier coat that was fake fur and beautiful at an AIDS benefit. “You can make beautiful fake fur and leather and you don’t have to kill anything. It’s a win-win,” she said.

She also remembered when her Aunt Gracie wore fantastic pants that had pleats. “Every time you moved it was a little symphony. I redid it. [Aunt Gracie] must have worn it to a wedding. I did it in black and put chains and pearls over it,” said Lauper. She also described a military jacket she designed, with black velvet to elongate. The vest is sewn into the jacket and there’s black velvet on the inside and knit on the outside.

Lauper noted that Siskin came to her apartment and the singer pulled out all her clothes. “I drew a lot of stuff, and the military jacket we did together. The main thing was to make it sexy and elegant,” she said.

Asked where she likes to shop, Lauper said she goes to Moschino or downtown to Manhattan’s SoHo. “If I had the time, it used to be my favorite thing to go into the stores in Europe. If I have time when I’m [touring] in Japan, I like to go in the stores and shop. I like the offbeat stuff. When I perform, I wear Moschino or I have it made. Sometimes they get it right and sometimes they don’t,” she said.

During her appearance on HSN, she plans to talk about the history of fashion and how to wear certain things. “I’ll talk about women and pushing it right to the edge, but not going over,” she said.

Vanessa Dusold, senior vice president of merchandising for apparel and accessories for HSN, said the collection is geared to a “sophisticated customer who’s looking for something unique, different and original.” She believes there’s really no age to it. “Even with Cyndi, she coins herself as ageless,” said Dusold. “She identifies with everybody from those who grew up listening to her and admiring her to the young audience of today.”

Dusold described the aesthetic of the line as being inspired by the history of fashion. “It’s inspired by a movement or a decade that really moved her in history. I think it’s a little bit of the old world meets today,” said Dusold, whose favorite items are a velvet coat with an oversized collar and a Victorian bolero jacket. “They’re familiar, but they’re done in such a modern and updated way. Everything has exaggerated sleeve lengths, it’s a little more tailored than we normally do here at HSN. Everything has a little bit of layers and a little bit of drama.”

According to Dusold, HSN wanted to do a deal with Lauper because the shopping channel has had success with artists who want to express themselves creatively in different ways. “In that first conversation, Cyndi had already put together pages and pages of fashion and home decor and things that inspired her. From there we went to one of her concerts in Florida and we met with at 11:30 p.m.,” she said. They then went to her New York City home.

“I think the customer loves her and respects her as an artist. They think she’s fun and a unique personality. I’m so excited for our customer to see another side of Cyndi. It’s really all about her creativity and how truly intelligent she is about fashion and how  much she knows about fashion,” she said. Right now, they are signed on to do this one capsule collection with Lauper, and will see how it does.

“We expect it to be a sellout,” said Dusold.

As for Lauper’s entertainment projects, she said “Kinky Boots,” is about to open in Germany, and she’s working on the score of  “Working Girl,” the musical. She also wrote a song for “SpongeBob SquarePants,” the musical, and recently rerecorded “Not My Father’s Son,” from “Kinky Boots” and shot a video.

But her new collection is definitely a priority.

“I’m excited about this line. I think it’s very elegant and also kind of fun. It makes you feel who you are. If you want to rediscover yourself again, this line will make you feel good and elegant.”