The designer will launch her contemporary label for spring retailing. 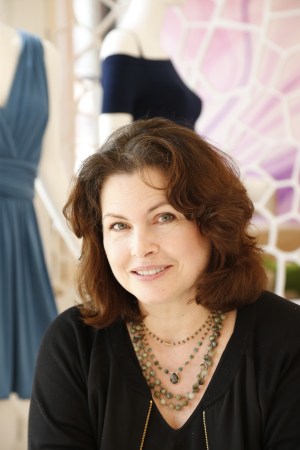 Cynthia Steffe is making another comeback.

This story first appeared in the September 16, 2015 issue of WWD. Subscribe Today.

The designer, who previously built a $30 million-plus wholesale business selling her contemporary line to stores such as Saks Fifth Avenue and Neiman Marcus, is getting back into the contemporary sportswear game with a new collection called C.S. Roberts.

Steffe, who lost the rights to her name to Bernard Chaus Inc. which still manufactures the Cynthia Steffe line, is married to Rick Roberts and will use his last name in the new venture. Steffe continues to be known as Cynthia Steffe personally and professionally.

The collection, which launches for spring, is novelty-driven. “It’s very much what my signature has always been. It’s soft and colorful and probably where I would have taken the Cynthia Steffe collection,” said Steffe in an interview in New York. There’s a large emphasis on dresses and blouses, as well as bottoms to work with them. “It’s lifestyle-driven and has an ease to it,” she said.

Steffe said her core customer is a woman 35 to 50 years old who loves fashion, doesn’t work and likes to shop. She is targeting department and specialty stores with the line and will show the collection to buyers next week and at Coterie this month.

“The most important emphasis is it’s a feminine collection, very ageless but sexy,” she said. The collection, which features luxe and fluid fabrics, embroidery and prints, is made in China and India. Roberts said the couple have partnered with Howard Sheer, who owns Ecru, an apparel company, in the business.

The company will market the collection through social media, as well as personal appearances by Steffe.

Roberts said he expects to generate between $3 million and $4 million in sales the first year. The collection is being shown at the TKE showroom at 260 West 39th Street in New York, as well as in Los Angeles, Dallas, Atlanta and Philadelphia.

Steffe has proven her resilience throughout a diversified career. After graduating from The New School’s Parsons of Design in 1981, where she won the Golden Thimble award for fashion design during her senior year, Steffe worked for the Anne Klein Co. as an assistant to Donna Karan and Louis Dell’Olio. She left in 1983 to become head designer at Spitalnick, a then start-up sportswear company headed by Irving Spitalnick, where she worked for six years and helped establish the company as a major brand in the bridge category.

She left in 1989 to launch her business with Roberts, which enjoyed success and had seasonal fashion shows. In 2000, they licensed the Cynthia Steffe name to the Leslie Fay Cos. The division, which was doing about $20 million in business at one point, had to extricate itself from Leslie Fay, which had gone out of business, and sold their label for an estimated $5 million to Chaus in 2004. They admitted it wasn’t the best plan to sell Steffe’s name, but they wanted to keep their employees working. In 2006, the collection was doing $30 million in wholesale volume and was profitable. After leaving Chaus at the end of 2006, Steffe later became a consultant to a line called Cluny. She stayed with that brand for two years, leaving at the end of 2013 to launch this company.