The new collection of contemporary dresses is priced significantly lower than the Steffe line. 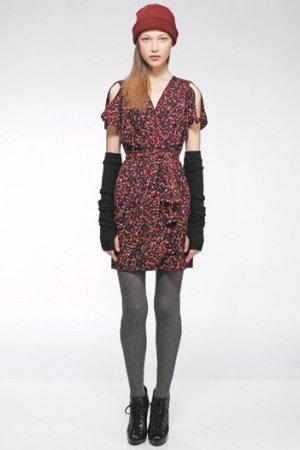 According to Terri Speiser, president of sales for contemporary and modern brands at Bernard Chaus Inc., “The core competency of the [Cynthia Steffe] line is dresses, and we’re positioned at the high end of contemporary. We felt there was an opportunity for the younger girl at the early part of her career to buy the Cynthia Steffe brand.”

Seamline is priced significantly lower than the Steffe line. The Seamline dresses will wholesale from $58 to $90, whereas the wholesale range for Cynthia Steffe is $43 to $360. Both collections are designed by Shaun Kearney, executive vice president of design-creative director of Cynthia Steffe.

Because of its accessible price points, the company expects Seamline to get broader distribution than the Steffe collection. For spring, Seamline launched in 16 doors of Lord & Taylor, and “there’s potential for Seamline to be in all the Lord & Taylor doors,” said Speiser. Steffe’s collection is currently carried in nine Lord & Taylor doors. In addition to L&T, Seamline was shipped this spring to Belk and several specialty stores. This fall, the line will also be available at Dillard’s, Nordstrom and more specialty stores. Since delivering six styles to stores this month, “every style has turned between 6 and 20 percent,” she said. Going forward, Speiser said there will be 10 dress deliveries a year.

“These are not simple dresses. They have great lines and interesting embellishments,” said Kearney, discussing why they chose the name Seamline. The dresses are designed with such details as asymmetrical necklines, one-shoulders, bustiers, ruffle treatment, prints and exposed zippers. “The print direction [in Seamline] is much younger than in the regular collection,” added Speiser. The dresses are manufactured in China, using fabrics such as matte jersey, ponte, lace, novelty jacquards, velvet and charmeuse.

Seamline is designed to be feminine and girly, with the ability to be worn to the office and out afterward. The line hangs in contemporary dress departments near brands like Laundry, BCBG and French Connection. Speiser declined to give first-year volume projections.

“The magic price point is under $200 at retail,” said Speiser. She said there have been conversations about branching into other categories, including sportswear, with the Seamline label.