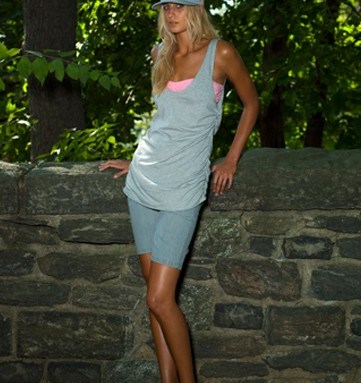 NEW YORK — The Designers & Agents show underscored just how much the contemporary sector — once the domain of T-shirt and denim lines — has evolved in recent years.

Many of the fashion labels were so sophisticated that they can easily serve as a segue to the entry-level designer arena. Colorful prints, embellishments and embroideries — both artistic and ethnic — were among the key trends, as well as details such as lace. Jumpsuits, the ubiquitous spring trend, were also evident, and accessories played an increasingly important role in the merchandise mix.

The three-day show that ended Monday took place against the backdrop of the crisis in the financial system. However, many of the booths were bustling with buyers ready to assemble their spring lineups with pen and order forms in hand. D&A was held at three separate venues — the Starrett Lehigh Center, Cedar Lake and the Chelsea Art Museum.

“Business is harder, but it’s still good,” said Meital Grantz, owner of the two Talulah G boutiques in Las Vegas. “I have to be a lot more selective. People are still buying the top pieces, but they may not be buying as many. I was looking for new and interesting jewelry and great accessories. I liked some of the heavier brass necklaces mixed with stones and some of the scarves.”

Kerrigan, the edgy, younger-skewing collection by Daryl Kerrigan, was new to D&A. Bestsellers included a machine-washable cupro black dress for $132 wholesale, cropped lightweight charmeuse pants with a gathered elastic tie detail for $96 and a cotton bandeau jersey top for $82.

“The show has been great,” said director of sales Brianna Espitalier. “We have seen a constant flow of great stores. I think people may be a little more price-conscious than they have been in the past, but what this means is that they are looking for value.”

“There were a lot of people from Japan, China and Greece,” Edelman said. “One reason is the dollar. Five places from Greece came, we opened up Ron Herman in Los Angeles and [South] Korea, Shop Girl in Australia, Mercer in Paris, and Ashti and Sauce in Dubai.”

Rory Beca bestsellers included a jumpsuit with a drawstring detail for $134 and a tie-dye tunic for $125.

Madrid-based Raasta offered looks such as a floral-sequined dress for $230, and a sequined and beaded top for $153.

“Stores are looking for something special, even if they are more expensive,” founder and designer Kavita Parmer said.

As part of its partnership with the Council of Fashion Designers of America and its Business Service Network, D&A picked Philip Crangi and Mary Ping to present lines at the show. Crangi brought along the Giles & Brother by Philip Crangi line, while Ping presented her four-year-old Slow and Steady Wins the Race label.

“It’s not supposed to be a diffusion line to my signature, but it’s a totally different project,” Ping said. “Each season is based on a fundamental of clothing design.”

The latest collection centered around all things luxury, including a $1,000 pearl T-shirt.

“Accessories have never been stronger,” said Barbara Kramer, who produces the show with Ed Mandelbaum. “Dresses are a littler dressier and not quite so casual. It’s a lot more sophisticated and feminine. In our market, buyers go for things that are more special and more unique. It’s not so much a price point conversation.”

Mandelbaum said this was the largest ever D&A in New York. Attendance was up 10 percent from last September.

“You can’t have a store without fresh merchandise,” he said. “There is business out there to do. You just have to work harder.”