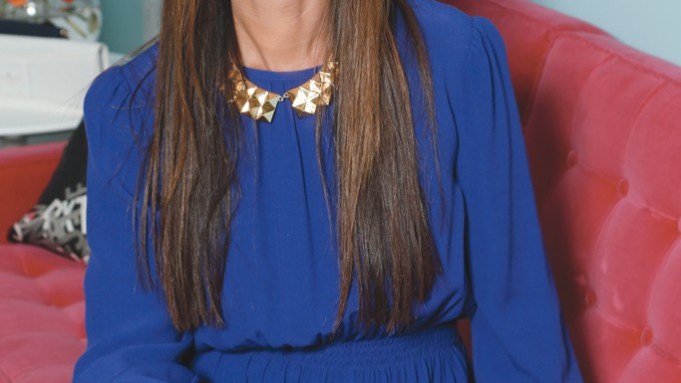 The brand’s president and chief creative officer is a collector of vintage jewels and clothes — i.e., cocktail dresses — as well as fashion illustrations and eclectic art, which she displays in the Brooklyn brownstone she shares with her husband, Simon Arscott, and their two standard schnauzers, Stanley and Lulu. Bright pink is her favorite color and she enjoys making a statement with a flash of the electric hue, like teaming a black-and-white print shift with shocking pink heels. It’s that sort of sensibility that makes her the perfect personality for the brand.

Since joining Kate Spade New York from Banana Republic, where she was executive vice president of product design and development, in October 2007, Lloyd has become a brand architect who has, in tandem with chief executive officer Craig Leavitt, conducted a successful overhaul and expansion of the brand. As she put it, she considers her role akin to that of a conductor who can “bring all the different tunes from all the orchestras together and make sure that the symphony makes sense.”

Today, Lloyd oversees all touch points of the brand from handbags to the design of the fragrance bottle and she has, since her arrival, made the bow a major feature that nicely aligns the various categories.

“One of the hardest things is to define what the brand tenets and design tool box can be for Kate Spade New York, which came from a little black bag, and then to gain recognition for these [attributes],” Lloyd said.

The Kate Spade New York woman, she noted, is “curious, she is playful and she is strong. I am defining the personal attitude traits, not the age. That’s one of the successes of the brand — it captures the imagination of women of age 15 up to the-sky-is-the-limit.”

Lloyd’s own trajectory is ripe for storybooks. The Brit grew up in Plymouth, England, by the sea, the departure point for the  Mayflower and the Pilgrims.

“I was destined for America one day,” she chuckled.

Lloyd’s upbringing was filled with fashion nuances. “I had an aunt who was a fashion designer-cum-model in the Sixties,” she recalled. “She was always an inspiration. She traveled around the world and she’d bring me back the most incredible, completely outrageous costumes. I used to customize these to be able to wear them.”

There was also her adventurer grandmother who, at 60, emigrated to Australia. “She went around the world and sent me dolls from all these different countries she visited, with the national costumes,” Lloyd said. All this instilled a fashion bug in her.

During one “career evening” at school, Lloyd decided she wanted to become a fashion designer and she enrolled at London’s Ravensbourne College of Art and Design. Following her Bachelor’s degree, she earned a Master’s at the Royal College of Art specializing in men’s wear. Fresh out of school, she was tapped by Byblos, where she worked with Keith Varty and Alan Cleaver. “I was whisked into this jet-setter world,” she remembered. “They sent me on my first trip to America. I stayed with them for about 18 months but Ancona, Italy, can be a very small place.”

She relocated to Paris for a job at Daniel Hechter, which was followed by Kenzo Jungle. After a brief stint at Aquascutum, she eventually landed at Burberry in London, we she stayed for six years and spearheaded the Burberry London label just as Rose Marie Bravo was starting a complete brand overhaul. “That’s where I got my big break,” she said, “I learned so much about what makes the DNA of a brand. When I went in, it hadn’t really been touched.”

Then Banana Republic came calling. Not just did this mean she would relocate to New York, but Lloyd also oversaw men’s, women’s and accessories, the latter of which, she noted, “became a new challenge to me and something new to learn.”

Her extensive experience laid the foundation for her next big job: creative head of Kate Spade New York.

“I wanted a new challenge,” she said. “Something creative, more designer, something I can really build. I had a little check list of what I wanted next. When [recruiting executive] Karen Harvey called me, she knew she had a minute to sell me on it. When I started to think about it, I knew this job ticked every single one of those boxes.

“It had a very strong DNA, and there was a huge opportunity to work with that DNA and take it from this beautiful niche jewel to something bigger and extraordinary,” she elaborated. “The brand tenets haven’t really changed. It’s always been colorful. It’s always been bold, playful, sophisticated and timeless. It’s taking all of those pieces that existed in one bag, and then blowing them out across so many different categories.”

The first extension was costume jewelry. Then, two years in came a complete assortment of ready-to-wear, marking a major accomplishment for the brand, which had dabbled in rtw before but never in a significant way. “It suddenly gave people the picture of the Kate Spade woman,” Lloyd recalled. “This is what she looks like, this is what she feels like. The launch of ready-to-wear was the big ‘aha’ moment that changed everything.”

Even though the timing of the launch — right around the worldwide financial meltdown — was far from ideal, it proved to be a boon.

“Anybody on paper would have told us it’s the worst and craziest thing to do, but actually, in the end, it was the best thing we could have done because it diversified our risk, in a sense,” she said, because the company was no longer reliant on just one category. “And we got interest in the brand as well. When everybody’s collections were reflecting the gray, terrible financial environment out there, we came out with a collection that was joyous, colorful and playful, and made people smile. It was hard to make people part with money, but they suddenly wanted [our product] because we were doing something that stood out from the crowd, which was very important. I think that’s a big aspect — being entrepreneurial and having a passion for what we do.”

She added that rtw was crucial to establish the whole brand language.

“I come from a background of rtw and it was really hard in the beginning to work on an ad campaign and borrow other people’s clothes or vintage clothes.”

The brand, she noted, easily lent itself to expansion. “It was about color,” Lloyd said. “We learned that when we launched. We sold far more bright yellow dresses than we did the black dress. The first print we did was a giant black-and-white zebra print. We had amazing sales on things that were playful. We put bows on things. And yet there was always a sophisticated and timeless appeal to them.”

As for her inspiration, it comes from “all over the place. It’s from travel, it’s from people, it’s from books. It’s just things that I love. I have always been a magpie and eclectic, and it’s pulling from everything and everywhere I go. [I don’t take] a vacation where I don’t bring back one idea.”

Besides jewelry and rtw, Lloyd also continued to build shoes with Schwartz & Benjamin, and home with Lenox. The brand also launched watches in-house, as well as developed a fragrance business — first with Twirl, and, in time for the 20th anniversary, Live Colorfully, which will launch over the next two months.
“It’s well-rounded and we’re trying to do each of these categories well,” she said. “Within each there are so many opportunities to grow.”

While she wouldn’t disclose the single largest category, Lloyd pointed out that, “If we can’t get handbags right, we don’t have the permission to do anything else.”

Regarding handbags, which is how Kate Spade herself started, Lloyd admitted that it was the most challenging area to tackle.

“Kate Spade had this huge hit with the original black tote bag that started the company in 1993 and was, like, the first ‘It’ bag,” she said. “You either have to keep going with that and keep developing it, or you come up against a bit of a wall. It took a while. If I now look back, it was good we did a lot of the work on the other categories. It took off a little bit of the pressure to be able to come back in and work on the handbags and build a strategy there.”

As for the future, Lloyd says the possibilities are limitless.

“Already, in the 20th anniversary year, we’re launching a new brand called Saturday,” she said. “It comes from the same DNA but it’s a sister brand, targeted at a younger customer who is not quite ready for the Kate Spade brand. It’s channeling Saturday — the best day of the week — seven days a week. We have these ideas that can be explored as lifestyle brands unto themselves.

“Within the Kate Spade New York brand, there is still so much we can do and we have only scratched the surface. Then there is the lifestyle piece. Who knows, one day there could be Kate Spade hotels. All those different things bring the Kate Spade experience to life in so many different ways beyond what we do today.”

And perhaps, one day, she will even zero in on a new ‘It’ bag for the brand.

“One of my biggest challenges is to recreate that ‘It’ bag,” she admitted.

That said, Lloyd is also fully aware that such a hit can easily spawn endless counterfeits — a notion that plagued Spade herself when she was in charge. Lloyd seems to be taking the prospect with a dose of humor.

“We haven’t had something that has captured the imagination of Canal Street,” she said with a smile. “I have told my team that once we do that, I will take them all out for dinner. Then we’re shutting it down.”