The queen of burlesque is in Melbourne this week to unveil her six-unit transeasonal capsule collection of dresses. 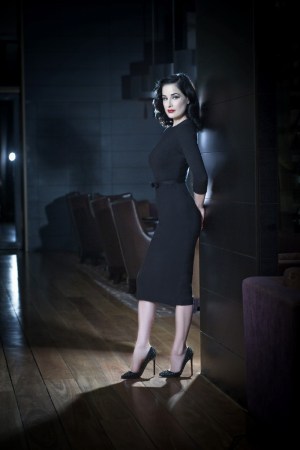 SYDNEY — Dita Von Teese made her name removing her clothes. Now she’s adding some to the celebrity fashion line business.

The queen of burlesque is in Melbourne this week to unveil Dita Von Teese Muse, a six-unit transeasonal capsule collection of dresses and one luxury trenchcoat that launches in November as an Australian exclusive at the David Jones department store chain.

Inspired by her favorite vintage finds with a wink at her striptease heritage, apparel styles will have whimsical names such as Bon-Bon, Follow Me, Showcase and Second-Look.

The collection will be rendered in silk georgette, silk velvet and tulle in shades of black and ruby red as well as a rose print, and will feature vintage-inspired detailing such as crepe de chine lining, grosgrain ribbons and waist-cinching powermesh paneling.

“There’s a lot of great things about vintage that translate so beautifully in modern times,” said Von Teese. “They’re timeless and elegant, they transcend the trends.…Usually you find these dresses and it’s a one-of-a-kind and often times, they’re really small sizes. I wanted to do things that would fit a lot of women.”

As with the lingerie collection, which will embrace plus sizes, Muse comes in a generous size range: Australian sizes 8 to 20 [U.S., sizes 4 to 16].

Modern touches include QR codes tucked into the seams that direct customers to Von Teese’s Twitter account. The technology also links subsequent ranges to special Webisodes that tell the story of each dress and the nearest stockist via Foursquare.

“We are building technology into the collection so you always have Dita with you and the dress keeps talking to you long after a swing ticket has gone or you say, ‘Wow, I so need the next version/color,’” explained Michele Hamdorf, chief executive officer of Lime Door Brands. Hamdorf’s expertise with celebrity collections began as a consultant for Collette Dinnigan’s Wild Hearts lingerie line for Target Australia and Australian cricketer Shane Warne’s Spinners underwear line.

“It’s actually hard to find companies that don’t just want to put your name on something and that I can get involved with. I’m happy to be hands-on,” said Von Teese, who is also launching a third beauty book in 2012 with HarperCollins.

Von Teese added that she plans to take her “Burlesque: Strip Strip Hooray” show on the road next year, possibly for the last time. “That’s my focus for next year, for people to actually see the shows I built and that way I can feel like I did it and I can focus on my other projects now,” said Von Teese. “It’s a time for working really hard and I think for setting the tone for the rest of my life. A lot of people say, ‘What are you going to do when you don’t look good in a G-string anymore?’

“I just want to show them that what I do is not really about what I look like in a G-string. It’s about the art of creation.”