Dockers Gets a Fresh Spin From Karla Welch

The stylist created a five-piece unisex capsule of khakis set to be sold at Dover Street Market.

From the Dockers x Karla collection.

“I’m khaki-obsessed,” Karla Welch said explaining why she wanted to link with Dockers for her latest collaboration.

“It’s a continuation of all the other projects I’ve done where I’ve wanted to work with best in show and reinventing American classics,” she continued. “I’m calling it gender free because I think anybody’s free to wear it.”

“It’s small,” Welch said of the capsule’s size. “I don’t ever want to overproduce. I just want to make a few things I love and make it the best I can. And that’s it.”

“We’ve been partnering and working with Karla over the last year and it’s been effortless with her,” said Karyn Hillman, senior vice president and chief product officer for Levi Strauss & Co.’s brands.

The company had been working on a Levi’s project with Welch in its San Francisco Eureka Innovation Lab when the idea for doing something with Dockers came up, Hillman said. 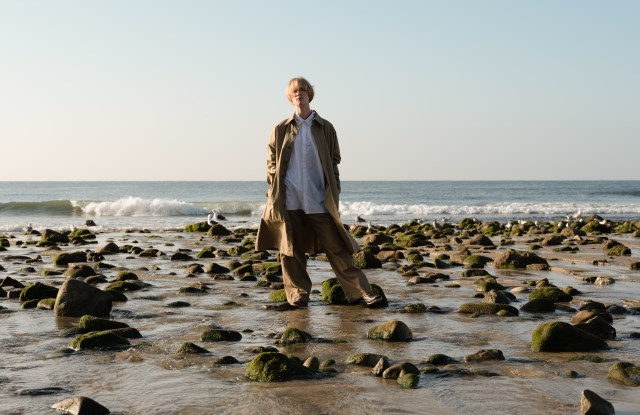 Hillman said Welch’s interpretation of the workwear classics speaks to a diverse audience, giving the capsules legs to open the brand up to new customers.

“I think going into it together, we thought that anybody should be able to wear this, whether it’s for him or for her,” Hillman said of the line’s unisex appeal, adding distribution through Dover Street Market and Welch’s site extends the brand’s reach to those outlets’ respective followers.

Inspiration came from the cinema in the case, for example, with the khaki pants that served as a nod to Fred Astaire, in addition to Welch’s own family.

“When I grew up, my father had a men’s wear store and sold old school Dockers and their work pants. The shirt with the piqué cotton, my uncle Bruno, my favorite uncle who died when I was young, he always had a piqué cotton shirt on with a little pocket on the chest. So that’s his shirt.”

Imagery for the capsule’s campaign was also kept in the family with Welch’s husband, Matthew Welch, photographing the collection on a beach close to where she grew up.

The stylist said another capsule with Dockers could be in the works for next year, but said it’s wait-and-see. She also has another collaboration with Levi’s coming up in November.