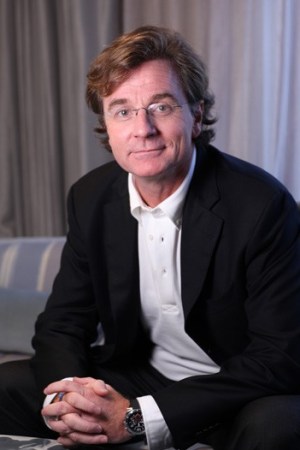 NEW YORK — José Luis Duran, the new chief executive officer of Devanlay SA, Lacoste’s global apparel licensee, attended his first-ever fashion show in the Bryant Park tents earlier this month. The 44-year-old executive was previously the ceo of Carrefour Group, the French hypermarket operator, and admitted the hubbub of catwalks and models was a world away from selling soups and stoves.

“It is a different world from what I have known,” said Duran after the Lacoste show in an exclusive interview with WWD, in which he outlined his strategy for the premium sportswear brand’s business. While Duran is a newcomer to the fashion arena — even he called Carrefour’s apparel business “weak” — his core expertise in branding, international operations and retail management will be brought to bear on Lacoste.

Duran said he plans to focus on three key areas of the business, which last year rang up sales of almost one billion euros, or $1.47 billion at average exchange. First, Devanlay is striving to establish a global Lacoste e-commerce business; second, the company is aiming to expand key items beyond the iconic crocodile logo polo shirt, and, third, it plans to expand Lacoste’s presence in emerging markets, which are primed for growth.

“There is a regional lever, a product lever and a channel lever,” he explained. “Geographically, we have to accelerate our growth where the economic growth is. This means Brazil and China and Russia — countries where Lacoste development is pretty new and where we are new in implementing our brand name or started opening our own stores two, three or four years ago.”

To that end, Duran plans to allocate more resources for Lacoste stores to those developing markets and away from established ones. “In the current environment you have to be more careful where you invest your money. As I mentioned before, more in Brazil, more in China, and less in France and less in the U.S. It’s a question of arbitrage,” he explained.

In the U.S., Devanlay operates 85 stores (67 full-price and 18 outlets), with nine of those units opening in 2009. While retail expansion may slow here, the company will still seek out opportunities, added Duran. Worldwide, the company manages 1,100 freestanding Lacoste stores, of which about 50 percent are directly owned and 50 percent are franchised.

In terms of Lacoste’s product range, Duran said he believed the brand needed to look for sales beyond the core logo polo shirt. “From a product point of view, we are still too known because of one iconic product,” he said, dressed for the interview in one of those polos and a suit. “We should not betray that item, but we develop every season hundreds of products which we have to make better known, which we have to merchandise better. We have to inform and train the customer better. Today our customers on average buy one and a half products each time they enter the store. How do we get that number up to two?”

Duran pointed to woven shirts as a prime target for growth. “We know how to do it. Let’s take some more risks to show it in the stores and expand it to our customers,” he said. “When I see our collections there is a lot we can do already with what we have, for sure. But afterwards, you ask your research and development team to find new products, new materials, new colors to look for innovation, but it takes time, and you have to give them resources. We have to be and do better.”

Similarly, when it comes to e-commerce, Lacoste has lagged in developing that channel outside the U.S. Duran said the U.S. site was doing “pretty well” in terms of sales, returns and customer satisfaction, and one of his first priorities as ceo of Devanlay was to implement e-commerce sites in other key markets, with France first, within the next nine to 12 months.

Duran emphasized the e-commerce site will push a broad range of products, not just easy-to-sell polo shirts. “The e-commerce site will be the biggest-ever-seen Lacoste store, where we can express ourselves in terms of values, quality, colors and assortment range,” he explained. “It’s a huge opportunity to show in an easy way to everyone what Lacoste is able to do. When the model has tested itself [in France], we have to figure out what other countries to go to. I’m pretty convinced that e-commerce in some of the Asian countries can show some huge potential.”

While Asia, Latin America and even Italy and France have continued to post good results for Lacoste during the current economic downturn, the U.S. market, which is the brand’s largest, has been more impacted, said Duran. The U.S. business is headed up by Robert Siegel, ceo of Lacoste USA, who has grown the brand tenfold to $320 million in sales over the past seven years.

“The American consumer reacts quicker during a downturn than the rest of the world,” said Duran. “And I hope he’s going to react quicker on the upside. To a certain extent volume has gone down in the U.S., and this is no different from what we have seen with other brand names. But the profitability basis continues to be pretty resilient. We continue to be cash flow positive and we continue to be positive in operating profitability. What we have to do is better execute in the stores so that the customer remains on our side.”

While Duran has directed Lacoste country managers around the world to instigate cost-cutting initiatives in response to the retail climate, one line item that remains sacrosanct is marketing spending. “I have told them, listen, you have to reduce your costs. But there is one issue you are not going to touch, and that is marketing and communications. I don’t want to lower Lacoste’s presence in terms of media communication. I think it’s really important to maintain the level that we have today,” he explained, with the goal of burnishing Lacoste’s premium image.

Duran said global Lacoste apparel sales should be “close to” one billion euros this year, making the figure about flat to last year. (This figure does not include other licensed products, such as footwear with Pentland, fragrances with Proctor & Gamble, eyewear with Charmant, leather goods with Samsonite, watches with Movado, belts with Collaert and home textiles with Zucchi and Uchino.)

Devanlay’s sales are less than one-eightieth the size of Duran’s former employer’s. In 2008, Carrefour Group’s sales totaled 86.97 billion euros, or $127.96 billion at average exchange, making it the world’s second-largest retailer after Wal-Mart Stores Inc. “For me, it wasn’t an issue of size,” noted Duran of his move to Lacoste. “What I was looking for was a brand name that I believe still has a big potential for development and growth.”

Duran joined Devanlay as president of the management committee on July 1 and assumed the ceo position this month, replacing Guy Latourrette in a pre-announced plan of succession. In June, Duran will be appointed to the top job at Devanlay’s parent company, Switzerland-based Maus Frères SA, which also owns Sweden-based Gant, outdoor brand Aigle and French health and beauty retailer Parashop.

Devanlay has held the Lacoste worldwide apparel license since 1999 and maintains a 35 percent stake in Lacoste SA, which owns the trademarks and is controlled by descendents of brand founder Rene Lacoste. Lacoste SA in turn owns 10 percent of Devanlay.