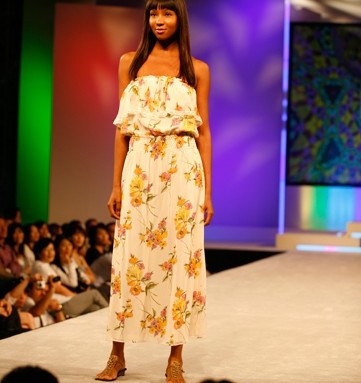 LAS VEGAS — Change was the theme at Magic Marketplace and the satellite trade shows here last week, as vendors and retailers altered their strategies in an effort to defy the weakened economy.

Responding to stores’ needs for items that can be delivered immediately, many vendors at WWDMAGIC, Project, ENK Vegas and the ancillary shows presented items from fall and holiday collections, in addition to spring lineups that are traditionally unveiled. Manufacturers also moved to lower the minimum amount for orders — if not eliminating them completely — and offered discounts on the spot.

Mary Kelly, owner of a Las Vegas boutique called Grimm’s, said vendors were more understanding of retailers’ plight in a rough economy. “[Vendors] had high minimums in the past, and now they have no minimums,” she said. “Instead of spending $3,000 on one vendor, we spend $3,000 on five vendors.”

Marty Branson, owner of Si Como No!, a boutique in Ajo, Ariz., that carries jewelry and clothes, among other merchandise, tweaked her buying strategy after months of what she described as “terrible” business. “I have stuck closer to the minimums than I have in the past,” Branson said.

Some vendors at WWDMAGIC cited slower traffic from buyers. The buyers who came because they considered the expo a must-attend, observed changes among exhibitors. Despite the launch of MAGIC Marketplace’s S.L.A.T.E. section, which highlights brands in streetwear and action sports, retailers expressed concern that shows like Project drew some of the younger, hipper brands away from the anchor trade event.

“I’m mostly shopping Project this year, because it seems that that show has become what MAGIC used to be,” said Lisa Hunt, who owns a Las Vegas boutique called Indra Grae. “I’m looking for edgier things.”

For the companies that exhibited at WWDMAGIC, tough times called for adjustments to inventory. Lynne Koplin, president of Tommy Bahama’s women’s business, which showed separately from the men’s line for the first time, said: “Who needs clothes right now? People are not traveling or going on vacation, so we are being very conservative on inventory.”

However, a strong turnout of international retailers that own multiple doors made WWDMAGIC worthwhile for exhibitors such as Los Angeles-based 213 Industry. The five-year-old young contemporary line had discussions with a Canadian retailer, which operates 38 stores, in addition to a chain from Thailand that owns between 40 and 50 stores. “We go here to pick up new accounts,” said 213 Industry president Michelle Kim.

Accessory vendors at AccessoriesTheShow and WWDMAGIC, held at the Venetian Hotel and the Las Vegas Convention Center, respectively, demonstrated they could adapt to retailers’ needs. In handbags, they presented lower-priced options and, in jewelry, variety was critical as silver gained momentum.

Molly Wang, sales manager at Cypress, Calif.-based jewelry firm BeModa, pointed to silver micropavé pieces wholesaling on average from $30 to $40 as bestsellers. “Because gold prices are very high, people who can’t afford gold buy silver,” she said. “I think this Christmas silver is going to do good business.”

The debuts of the lower-priced lines were in step with some buyers’ comments that affordable handbags were performing better in the economic downturn than apparel. “They seem to spend more on bags than anything else,” Allison Barta said of shoppers at her clothing boutique-cum-tea shop Tea Dreams in Gilbert, Ariz., where handbags hover primarily in the $80 to $100 retail range.

After seasons where popular bag shapes seesawed from enormous to small, medium-size bags finally got their share of attention. Examples included a double-pocket shoulder bag by Latico, a lengthy tote by Gaya, a slouchy satchel by Sequoia Paris and a so-called Swing carryall by Paige Hamilton Design.

Jewelry assortments contained doses of dainty and chunky pieces to appeal both to buyers sticking with smaller items and those ready to go bigger. Delicate peekaboo pendants with engraved musings and etched layers were brisk sellers at Watertown, Mass.-based Pieces of a Girl, and the popularity of long-chain necklaces at Lauren G. Adams in Hollywood, Fla., hadn’t waned. At Kiki Designs, designer Kristi Uilani Pagador said cocktail rings, including those with agate wholesaling for $120, continued their hot streak.

“With the economy, it is about a simpler dress with more accessories,” Uilani Pagador said.

Pool at the Las Vegas Convention Center provided some surprises for attendees expecting just street-style casualwear from the youth-focused show.

“I’m looking for edge, and it has to be innovative but wearable,” said Hunt of Indra Grae, who placed orders with seven vendors, including Anzevino & Florence. “I’ve found that here. I was surprised and impressed.”

The biannual show, launched in 2001, was acquired in 2005 by Advanstar, parent of the larger MAGIC and Project shows that run the same week. With about 300 exhibitors and some 20,000 visitors over its three-day run, it focuses largely on apparel with boutique appeal.

“This show has become more innovative and it’s not at all corporate,” said Freddie Rojas, who was showing his Rojas line. “This has become a great place for young, independent designers to step out.”

During Lingerie Americas in the Las Vegas Hilton and CurveNV shown in the Venetian, shapewear took center stage and vendors vied to push their goods beyond lingerie and department stores.

Neiman Marcus, Bloomingdale’s and HSN are among those that picked up New York-based shapewear line Yummie Tummie, which wholesales a basic tank style for $26, in the months since its January launch. Largo, Fla.-based intimates company N-fini Shape’s subtle seamless shapewear looks priced from around $25 to $52 will soon hit shelves at Saks Fifth Avenue, where women are expected to buy them to wear under cocktail dresses.

“It is a niche product everybody needs,” said Heather Thomson, founder of Yummie Tummie, who is also co-creative director for House of Deréon. “Shapewear has changed from girdles to everyday dressing today.”

Competition in shapewear is mounting from companies not historically focused on intimates. Body Wrap, which is owned by Quebec-based swimwear specialist Swim Experts Alliance, has spread to major retailers such as Nordstrom, Macy’s and Chico’s, and New York sportswear firm Rousso Apparel Group recently introduced Teez-her, a line with tanks that compress stomachs using panels of nylon and spandex.

Teez-her and other shapewear vendors promoted items as replacements for traditional apparel pieces like tank tops. Vendors of novelty brands such as Itty Bitty Bras, for a small-chested clientele, and Cooljamaz, for women with night sweats, touted their appeal beyond core lingerie shops.

Jodi Schlichtig, owner of Sequins Bridal Boutique in Cherokee, Iowa, considered bringing in intimates brands although she previously had sold them only sparingly. “I am trying to expand my business so [customers] always have a reason to come back,” she said.

Active swimwear was among the significant themes across some 60 lines at ISAM, the swim section of WWDMAGIC, held at the Las Vegas Hilton.

Sea Experts Alliance launched Captiva, a line for active misses’ customers wholesaling from about $23 to $28 for separates. “It is a niche that people were looking for in the market,” said Donna Law, a senior account executive at Sea Experts Alliance.

Jag, a line under the Perry Ellis International umbrella, harkened back to its active roots with a sporty package of pink, black and blue suits heavy on colorblocking, zippers and belts. L Space’s Mod-inspired group of green, blue and white suits was its activewear-oriented contribution.

One-pieces with lower necklines were crucial to attracting younger shoppers for Carol Wior, and Manhattan Beachwear infused Kenneth Cole New York with sophisticated one-pieces in its return to the brand after a two-season hiatus. “We went back to the men’s wear inspiration,” said Carrie Seifert, press relations manager at Cypress, Calif.-based Manhattan Beachwear.

Sharon Parrott, manager of Stunning Sunning Swimsuit Boutique in Quincy, Wash., especially appreciated the updated one-pieces. “The younger moms are wanting classic one-pieces that haven’t been seen in the market,” she said.

Women’s ready-to-wear at Moda Las Vegas in the Venetian was splashed with floral patterns and vibrant colors.

At Laundry by Shelli Segal, where eveningwear wholesales mostly from $89 to $189, sales manager Jami Brown said, “Purple has been really a key focus.”

Moda vendors hoped for higher traffic volumes, and several insured they attracted enough visitors by setting up booths at WWDMAGIC and Project as well. They also worried that the buyers who attended Moda favored lower-priced merchandise than what was offered.

Diana Zhang, chief executive officer of Shayne Industries Inc., unveiled the New York company’s first licensed coat collection for Nicole Miller, which wholesales from $150 to $298. “Buyers are not looking at high-end stuff,” she said. “They want to keep it to [easily] sellable items.”

Retailers Jim and Bobbie Beal fit Zhang’s description. Overall, Moda was too pricy for their shop, Bobbie’s, in Grand Forks, N.D. However, they did appreciate designers’ attempts to brighten the palette. “For spring ’09, we are looking for more color, something you can bring back to black and white,” said Bobbie Beal.

The Off-Price show at the Sands Expo & Convention Center was crowded with retailers seeking low-cost apparel. Both vendors and buyers said Off-Price seemed less prone to the slower foot traffic apparent at some of the week’s other shows.

“People are just looking for good deals, it doesn’t much matter what the merchandise is,” said Levan Tat of Los Angeles-based GLT Inc., who noted that activewear was selling particularly well. “Costs are so high that everyone is trying to liquidate and bring in new merchandise.”

Some attendees at the Women’s Wear in Nevada show at the Rio Hotel said poor market conditions overall were steering buyers toward discount merchandise.

“[WWIN] seems very pricy for what they’re offering, especially in this market,” said Tiffany Rosenbaum, who was buying for her boutique in Gun Barrel City, Tex. “I think we’re all looking for bargains right now, that’s certainly the way I’m approaching my buying.”

WHEN I MOVE YOU MOVE

The week marked the launch of Christian Audigier’s When I Move You Move show at Caesars Palace, intended as a showcase for all 10 of the Los Angeles designer’s brands.

“We haven’t seen that many orders yet, but from a marketing and exposure perspective I think doing this show is a good investment,” said Artem Khomaykov of Bettie Page clothing, who paid $15,000 for a small booth at the show. “Wherever Christian goes there’s always tons of cameras, and he’s been walking around a lot, so that’s good for us.”