Elizabeth Emanuel, who made her name designing Lady Diana Spencer's wedding gown with her then-husband, David Emanuel, is moving into the mass market. 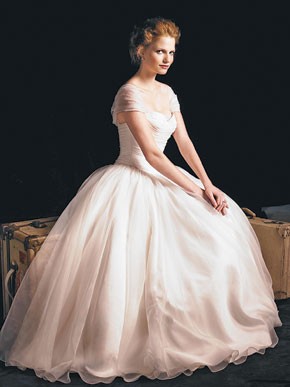 LONDON — Elizabeth Emanuel, who made her name designing Lady Diana Spencer’s wedding gown with her then-husband, David Emanuel, is moving into the mass market.

The British designer has teamed with British retailer BHS, owned by Sir Philip Green (who also owns Topshop), to create a capsule collection of wedding dresses called Art of Elegance.

The range bowed last week, and Emanuel said there are plans to expand into a full bridal lifestyle offering and break into the U.S. market via a licensing deal with an American retailer.

“All girls want to look like celebrities when they get married, but that is really expensive,” said Emanuel, whose dresses for BHS are priced at 500 pounds, or $992 at current exchange.

Art of Elegance is a four-piece range that will sell in five BHS stores nationwide and online. BHS will offer an in-store fitting service run by specially trained staff.

“They even have to wear white gloves. You don’t just get the dress, you get the whole experience,” said Emanuel, who made the samples in her London studio.

Art of Elegance is in keeping with the silhouette for which Emanuel has become known. Each dress has a full skirt with a nipped-in waist in a variety of fabrics, including tulle, organza and satin.

“The big dresses have always done well for me. They are all very romantic,” said Emanuel. She is already working on new styles, such as A-line skirts, bridesmaids’ dresses, accessories, shoes and veils.

“Eventually we want to create a whole lifestyle package at that price range,” she said.

Emanuel did not give sales projections for the line, but said the BHS Oxford Street flagship was already booked for fittings until late next month. BHS is the most recent British mass market retailer to offer affordable bridalwear, joining stores such as Marks & Spencer, Next and Asda.

Emanuel said plans for a U.S. licensing deal are at an early stage, and she was optimistic about re-creating a similar, and equally popular, offer for the U.S. public.

“I know what is possible now,” she said. “The secret is to create something concentrating on cut, and really beautiful silhouettes. It’s designing within your price point, rather than making it look like a cheap version of a designer dress.”