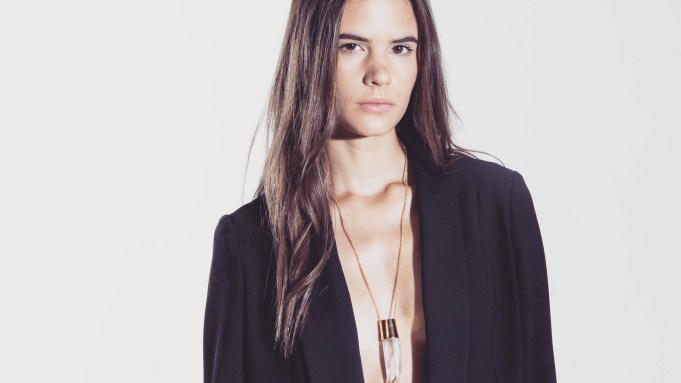 In the past year, Erin Fetherston has assumed new roles as mother and Angeleno. It’s understandable then that the designer, who once studied in Paris and established her fashion company in New York, is rethinking her approach to casual elegance.

At her runway show scheduled for Sept. 11 at New York’s Clarkson Square, the Los Angeles-based designer plans to premiere her first collaborations in jewelry, shoes and denim as well as the return of her higher-priced namesake line. The new projects support her four-year-old contemporary brand, Erin Erin Fetherston, which she plans to continue selling at stores such as Nordstrom, Lord & Taylor and Neiman Marcus. But they also represent her growth.

“Everything came from a personal place,” she said. “It reflects me — who I am today.”

The collaborations — Unearthen for jewelry, Tkees for sandals, Parker Smith for denim — supplement the ones that she launched in 2013 with Cosabella for lingerie and then earlier this month with Fragments Identity for furniture and home decor. The new partnerships came about in a serendipitous way in the past three months.

Last year, at a random shop, Fetherston bought a compact column of rose quartz as a necklace pendant when she learned she was pregnant. “It was a special gift to myself,” she said. The pink present eventually inspired the crystal buttons and bullets that will be applied to tuxedo jackets, billowing blouses, wide-leg trousers and bias-cut gowns from the ready-to-wear line she’s relaunching for spring 2017. A friend’s introduction to Gia Bahm, the founder of New York-based Unearthen, led to a five-piece collection, including a necklace, cocktail ring, headband, barrette and earrings, all set to sell from $200 to $500.

Tkees are Fetherston’s go-to shoes in L.A.’s sunny clime. “I know they’re flip-flops,” she confessed. “I personally like the lightness of that on my foot.” They happened to be the footwear shodding her soles when she tried some clothes on herself at an exhausting fit session. She realized that “there’s something about the simplicity of this shoe that feels very fresh with some of the pieces that we have in the collection.” Her crystal-embellished slides for Tkees are priced at less than $150.

The denim is also a sign of Fetherston adapting to the California lifestyle. Though often photographed in feminine dresses, she admits to wearing denim, especially Parker Smith’s jeans, whose fit she likes. It was one style in particular that she struggled to locate that goaded her to partner with the Vernon, Calif.-based brand. “I wanted to find a really lightweight wide-leg jean that I could wear in the hot summer and not feel like it was elasticized or tight,” she said. The failure to find a pair in a gentle vintage wash resulted in a denim capsule collection consisting of four jeans, two shirts, a maxidress and a jumpsuit. As seen in the caftan-like dress, drapy jeans and button-up shirt with cropped sleeves, which like the rest of the group sell for under $225, “they echo other silhouettes and styles that I have in my rtw collection,” she said.

As some designers are debating between offering see-now-buy-now fashion and sticking with the traditional schedule of shipping collections six months following their presentation, Fetherston is choosing a hybrid model for her show at New York Fashion Week. She plans to take preorders for her spring rtw collection immediately after the event and to sell the Unearthen jewelry and Tkees sandals to consumers on her and her collaborators’ web sites in October.

For her rtw line, which costs from $200 to $1,500, she envisions combining a wholesale business with a direct-to-consumer model that allows for exclusives on her web site. Now that she has a better handle on her secondary label, which has been absorbing her attention since she paused rtw in 2011, she can explore quality fabrics and polished tailoring in the relaunch of the pricier line.

In a way, it’s the same approach she’s taking to her own life. “My collection has always been very connected to me personally,” she said.