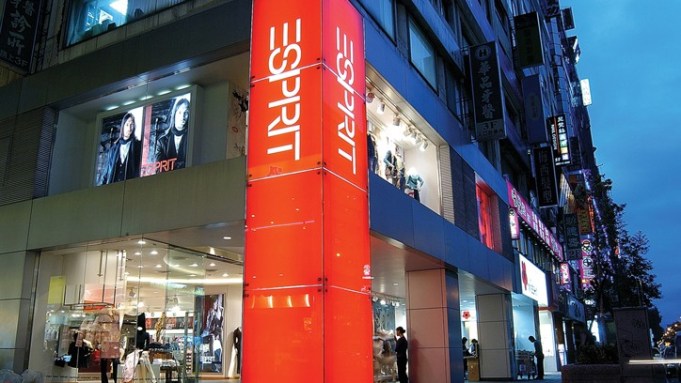 It is as much a part of the mall landscape as the pretzel vendor in the food court and the fountain lined with pennies: the in-store shop — that distinct square of space in a department store that is all one company’s own, right down to the light fixtures and furniture, the soundtrack and staff uniforms. Few know that the concept was pioneered by Esprit co-founder Doug Tompkins, who in 1986 envisioned a world-within-a-world for his business, specifically, the Esprit brand inside Macy’s.

“Doug was a real stickler for design principles — everything from labels, the garments, the hangtags, bags, boxes. Everything was about controlling the brand,” explained Jerome Griffith, Esprit’s North America president. Opening that year on the fifth floor in the juniors department at Macy’s in San Francisco, Esprit’s home base, the Esprit shop-in-shop launched a global retail concept that, as Griffith related, “is still one of the great business models out there.”

These days there are myriad retailers that use the in-store shop concept, from Cole Haan to Tom Ford. The appeal, as Tompkins saw it, was to create a unique environment for the company’s women’s, men’s and children’s wear within a larger retail space — thereby burnishing the company’s image as much as ensuring those Esprit hoodies and T-shirts didn’t get lost in the racks.

“It’s evolved over the years, but I’m not exaggerating when I say that that’s how the company grew to be so big, through the shop-in-shops,” said Griffith, who noted the company has traditionally used renowned architects, including Norman Foster, Aldo Cibic and Ettore Sottsass to create their stores (today the company also has its own in-house architecture department).

The first European in-store shop was installed the same year as the U.S. one, in Berlin’s high-end department store Kaufhaus des Westens, known as KaDeWe. Consistency has been critical in building the shops, from the lighting (“We try to use ambient light,” Griffith said) and the floor paneling to the chairs and register consoles.

Yet with more than 4,000 such shops worldwide, Griffith admits that maintaining that uniformity can be a challenge. Of the installation pieces, “We have things made locally, so the products in each region look the same,” he said.

Not to be forgotten, the brand also operates more than 690 directly managed freestanding stores and 14,500 controlled-space points of sale internationally, including franchises, in-store shops and corners, occupying total selling space of over 10 million square feet in more than 40 countries. The design philosophy is to maintain the aesthetic between their design and the in-store shops as well, to keep the brand message consistent.

The trickiest part of the equation? The shopping soundtrack. “Everybody has an opinion on the music, and it makes it a little more difficult because we’re an international company,” he observed. “People have different tastes.”

The company has five different playlists — one for Asia, another for the U.K., one for France, one for other parts of Europe and one for North America. “My experience has been that British music is more progressive,” Griffith laughed. “It seems people also like to listen to music they can understand, so we tailor the playlists pretty carefully.”

Griffith is planning to increase the number of U.S. “SIS’s,” in Esprit parlance, from 53 to 82 by the end of October (they are at Dillard’s and Boscov’s), and though he said that the stores get a cosmetic overhaul every three to four years, there are no plans to tinker with a business model that has proven quite lucrative. (The company does not have specific numbers on sales comparisons, but a spokeswoman says that in-store shop areas usually achieve a 20 percent higher performance rate compared with multilabel shops.) Each partner is offered a “comprehensive service package,” which includes architectural planning, visual merchandising, staff training and “motivation,” 12 lines a year of each product division and corresponding visual displays.

The intended message of the package may be a mouthful — “Esprit is an international, youthful, lifestyle brand selling affordable luxury and bringing newness and style to life,” said Griffith — but the resulting aesthetic is pretty straightforward. Youth is a key word here, but Griffith says he quantifies it by a mentality, not a number. “Our client’s mental age is about 28,” he said, “so we tailor the shop-in-shops to that demographic. They should be clean and uncomplicated — simple.”