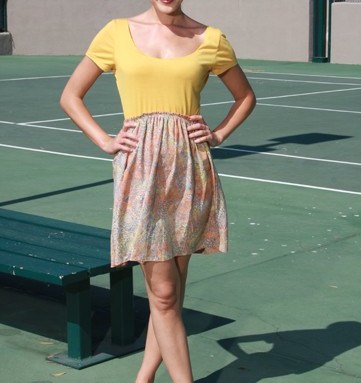 Expanding their offerings, turning to social media and breaking away from the cheap-is-better pack are just some of the new arrows in the quivers of the juniors industry, which is seeking ways to court a fickle shopper at a time when her parents are tightening their belts.

Like other segments, sales in juniors have taken a major hit in the last year. Apparel sales year-to-date through May 2009 for girls ages 13 to 17 fell 10.8 percent to $5.7 billion, compared with the year-ago period. For women ages 18 to 24, apparel sales dropped 6.6 percent in the same time frame.

“It’s a very tough market,” said Manish Khanna, president of Luv2Luv Inc., a New York-based maker of junior dresses, tunics, skirts and pants in cotton, chiffon and rayon. “There’s more last-minute buying. You don’t know how much to order since there aren’t lead times anymore. While manufacturers are willing to play the waiting game, some aren’t so amenable to lowering their prices. They’re either holding or raising prices to maintain the integrity of the category.

“We won’t cut our prices because we don’t want to give away what we’re working for, which is a certain image,” Khanna added.

New Breed Girl is moving away from the younger end of the juniors spectrum with its T-shirts sporting edgier graphics in bright shades of tomato, turquoise and yellow. Wholesale prices have risen, running $12 to $18.

“We’re appealing to an older customer,” said Patrick Wood, vice president of New Breed Girl. “We’ve also abandoned private label, which was becoming too cheap. The pressure to be cheaper will always be there.”

Manufacturers are also repositioning themselves by broadening their mix of items to dovetail with the shopper’s changing needs. For instance, the juniors girl isn’t buying denim as vigorously as in previous years. Year-to-date denim sales through May grew just 1.1 percent to $1.1 billion compared with the same period last year. Yet, she’s embracing outerwear; year-to-date sales through May leapt 12.4 percent to $355 million in the segment.

So, denim companies like Dollhouse and Jou Jou have added new categories to round out sales. Last spring, Dollhouse tested 15 styles of dresses, and they sold out at $14 to $19 wholesale. The juniors line is now doubling its dress count for holiday and early spring with prints in plaid, gingham checks and Liberty florals. Jou Jou introduced outerwear last year with trench coats, then added faux lambskin jackets in the spring. The company got behind the push with a media campaign that includes ads in Seventeen and Justine. Outerwear now accounts for 40 percent of the business.

Another firm in expansion mode is YMI Jeanswear, taking out an 1,800-square-foot booth at WWDMAGIC. The nearly 10-year-old denim maker, which began offering outerwear last season, will also showcase its three new licensed categories — dresses, woven and knit tops and activewear — at the trade show. In the next two years, the company hopes to expand into footwear, handbags and fashion accessories.

“This is the best time to be doing this,” said Deke Jamieson, YMI’s executive vice president of licensing. “There’s a lot of fallout during economic downturns. Retailers are looking to be with companies that are financially secure and capable of drawing traffic to stores.”

YMI is one of a growing number of juniors manufacturers, including Mighty Fine and Jem Sportswear, maker of Awake T-shirts, that are marketing themselves through the Internet with revamped Web sites and by utilizing social media. In the last year, the denim company has joined Twitter and Facebook, participating in giveaways including its current contest to win a Hollywood-style shopping spree and spa date with brand ambassador Kimberly Caldwell. Awake is using the marketing tool to build buzz for its new apparel and jewelry collection inspired by “The Twilight Saga: New Moon.” The line comes out in October at Nordstrom.

Harnessing the power of the Internet is a way for junior brands to stay current with their customers while minimizing promotional costs.

“We’ve scaled down on marketing and are moving more into Internet-based options,”  said Doron Kadosh, chief executive officer of Los Angeles-based Celebrity Pink Jeans, which sells to Dillard’s and Macy’s.

Trade shows are one promotional tool still embraced by some juniors companies. WWDMAGIC officials say they’re buoyed by the registration figures, which also show an uptick in preregistered retailers. Officials note the return of XOXO, an exhibitor who skipped the show last February, and the presence of big names such as Harajuku Lovers, making its second appearance at the show, and Baby Phat.

“There’s great enthusiasm out there,” said Chris DeMoulin, president of MAGIC International and executive vice president of Advanstar’s Fashion Group. “We feel that product and color is helping this [juniors] segment.”