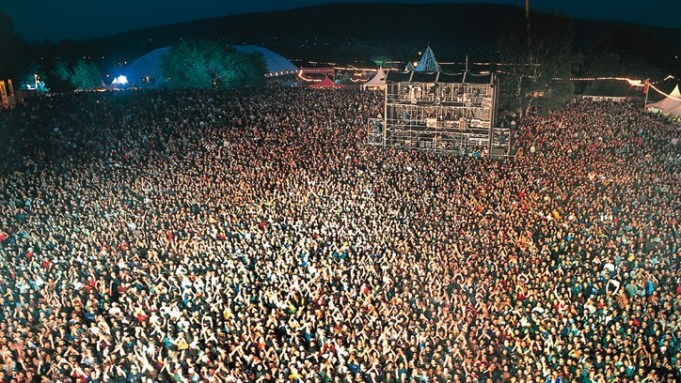 From a 24-hour ferry party from Stockholm to Helsinki and back again to a beach-lined peninsula in eastern France, this summer a host of fashion brands are hoping to soak up the feel-good vibe as they sponsor music festivals across Europe. “Partnering up with a music festival gives us the opportunity to reach out to a broad variety of people within our target group using just one platform,” says Måns Ericson, brand marketing manager for Adidas Originals in Scandinavia, which this year is sponsoring Sweden’s Way Out West festival for the first time. “It’s the chance to reach out to all potential music-loving Adidas Originals consumers, showing them the diversity of our brand,” he says. Sweden is also high on the list for denim and record label April77, which in June partnered with Rockbåten, a 24-hour ferry party, for the second time. “We’re particularly involved in this market,” says Laura Saglio, the French brand’s public relations pro, who also coordinates the Rockbåten partnership. “The lineup and artistic choices stick with ours, too, and the originality of the project makes it ideal for April77 Records, and it’s on a boat! Don’t you think it’s a great idea?” Converse, meanwhile, is sponsoring five rock festivals this year in France alone, all first-time partnerships for the label. “Converse has been the rock brand for over a century—we don’t forget our roots,” says Cyrille Ermenier, communications manager for Groupe Royer, the brand’s French licensee. Converse selected the five biggest festivals that have a rock-focused lineup, plus a young festivalgoing crowd of 18- to 35-year-olds. While some brands have such accolades as official streetwear partner, like British label Bench at the U.K.’s Creamfields Festival this year, brands without rock or street origins also are getting in on the act. Contemporary label Swildens, for instance, has customized a T-shirt, dubbed Rock Scene, featuring the AIDS awareness red ribbon, to be sold only during Paris’ Solidays festival, which raises funds to battle the virus. American Retro, meanwhile, has created a T-shirt for Corsica’s Calvi on the Rocks event. Here, a spotlight on some of this summer’s festivals that have brands as well as bands in the lineup.

When and where: July 2 to 5 in Roskilde, Denmark, a town 40 kilometers, or 25 miles, from Copenhagen.
Capacity: 108,000
Festivalgoer profile: Last year, 46 percent of attendees were women and 54 percent were men. Twenty-six percent were first-timers and the average age was 24.

Unique selling points: The festival has its own swimming lake. Organized by The Roskilde Festival Charity Society, all profits go to charity and there’s a focus on the environment. Last year, attendees collected 27 tons of garbage in exchange for cold beer.

Brand lineup: Following its introduction last year, Diesel will again have a stand at the festival called The Diesel Human Carwash, where festivalgoers get the VIP treatment. As their jeans are washed and dried, they can get a shower and relax to music from DJs including the up-and-coming Danish duo Fagget Fairys while getting a foot massage.

When and where: July 3 to 5, on the peninsula of Malsaucy near Belfort, France.
Capacity: 100,000 Festivalgoer profile: 40 percent of attendees come from the surrounding eastern region, 32 percent from the rest of France and 28 percent from other countries.
Unique selling points: Organizers name the beauty of its location (it’s surrounded by lakes and hills with one stage on the beach) plus the ticket price, which has remained unchanged for the last three years, as among the main selling points. Luxury camping in a teepee costs just 7.50 euros, or $10, a night.
Music highlights: 70 acts including The Prodigy, Kanye West, The Ting Tings and The Kills (which means the queen of festival chic herself, Kate Moss, might show in support of her boyfriend, front man Jamie Hince), plus this year’s emerging success story, English electronic duo La Roux.
Brand lineup: Converse has shipped over a Greyhound bus to serve as an exhibition on wheels showing the brand’s upcoming rock group collaborations, including a pair featuring a photo of a young AC/DC and a pair emblazoned with the Metallica logo. Converse-wearing attendees, meanwhile, get to jump the queue. At a festival in Germany last year, guests already inside were throwing their Converses over the fence so their friends could get in quickly.

CALVI ON THE ROCKS

When and where: July 3 to 6, in Calvi, Corsica.
Capacity: Around 8,000 people last year.
Festivalgoer profile: With Parisian nightclub owner André among the organizers, this is where Le Baron regulars decamp in the summer. Parisians make up 40 percent of the turnout. Around 25 percent are locals, with 15 percent from the south of France and 20 percent from outside France. Thirty-five percent are between 16 and 25 years old, 55 percent are between 25 and 35 and 10 percent are older than 35.
Unique selling points: Organizers try to keep the festival small, cool and exclusive. The port setting, plus private beaches and a blend of “Corsica, dolce vita and rosé,” makes this festival unique, say organizers.
Music highlights: A largely electronic lineup includes Phoenix, Klaxons and Friendly Fires, plus the quirky Ebony Bones and Parisian regular Busy P. “Some people come just because it’s Calvi on the Rocks,” claim organizers. “They really trust in the festival lineup without knowing it.”
Brand lineup: American Retro has created this year’s official festival T, 50 signed versions of which will be sold in its Rue des Francs-Bourgeois boutique, which will be festooned in a Calvi on the Rocks theme. Franklin & Marshall has a private beach named after it during the festival, and the College-style label, which also sponsored Calvi on the Rocks last year, will make a limited edition T-shirt.

When and where: July 23 to 25 at Göta, Faroe Islands, which lie between Iceland, Norway and Scotland.
Capacity: 6,000, with from 2,000 to 4,000 watching from surrounding islands or boats.
Festivalgoer profile: Nearly one in five of all Faroe Island natives will join in the festivities, thanks to free tickets. Faroese youngsters join fans of indie, metal, electropop, folk and techno from Denmark, the European Union, the U.K. and all over the world.
Unique selling points: Set on a tiny island, G Festival boasts beaches, mountains and views of the surrounding islands. Plus, founder Jon Tyril has a knack for picking the hippest new bands.
Music highlights: This year, G Festival’s very Scandinavian lineup includes Veto, one of the most popular bands in Denmark, alongside critically acclaimed Danish band Valkran and The Haunted, which delivered Sweden’s top-rated metal album last year. Other awaited artists are the electronic duo Ghost, plus the Faroe Island’s homegrown metal band SIC.
Brand lineup: Trend Floor, a Faroese urban fashion retailer, is a sponsor.

When and where: August 13 to 15 in Slottsskogen, a park in the center of seaside city Gothenburg (Sweden’s second biggest).
Festivalgoer profile: Gothenburg boasts a student population of 60,000.
Unique selling points: As well as the festival, there’s a threeday bonanza of music across Gothenburg over the course of the event.
Music highlights: Antony and the Johnsons, My Bloody Valentine. “There’s great music for more or less everyone, from niche independent bands like Wilco to mainstream heroes like Lily Allen,” says Adidas’ Ericson.
Brand lineup: Adidas will bring its infamous house party to Sweden. A concept introduced to fete the brand’s 60th anniversary last year, the event is billed as “the house party to end all house parties.” The brand also will display its 2009 brand campaign in a creative way, according to Ericson.