The line of men's and women's apparel and accessories was inspired by Reinhold Messner's summiting of Mount Everest in 1978.

Fila is heading to the mountains, the woods and the canyons for its newest collection. The company has created Explore, a limited-edition assortment of footwear, apparel and accessories for men and women that will have a soft launch at ComplexCon in Chicago this weekend.

To support the launch, Fila will open experiential pop-up stores in SoHo in New York, in Los Angeles and in several other cities around the world on July 26.

The genesis of the collection dates to 1978 when mountaineer, adventurer and explorer Reinhold Messner was the first to summit Mount Everest without the aid of supplemental oxygen dressed in high-tech Fila gear.

While Explore is inspired by this feat and the brand’s outdoor heritage in skiing, hiking and trekking, the collection is “not so literal, but is more fashion-driven,” according to Louis W. Colon 3rd, Fila North America’s vice president of heritage and trend. So it’s better suited to hanging out at a festival than hiking the Appalachian Trail.

He said many customers still think of Fila as a tennis or basketball brand, but it has a rich history in other outdoor sports as well and the new collection is intended “to get customers to explore the brand more. There are tons of details that play on the trend and are also a nod to our past. It’s for the forward-thinking customer.”

Explore will be broken down into four categories: Canyon, Woods, Mountains and Elements. Each will offer the same apparel, footwear and accessories but in different colors. The collection will include tank tops, cabana shirts, long- and short-sleeve T-shirts, vests with tactical-inspired elements, packable jackets in bright colors, leggings, convertible pants/shorts, walking sticks, hats and five models of footwear. The shoes range from sandals to trail and running shoes. 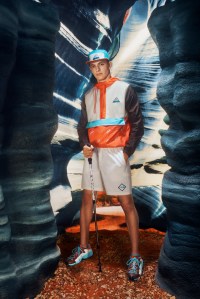 A look from the Canyon collection under the Fila Explore label.

“We went wide but not deep,” Colon said. So while there are 140 stockkeeping units, they’re available in limited quantities. “They all launch at the same time and are available until they sell out.”

In addition to ComplexCon, Explore will be available on the Fila web site and at the pop-up shops beginning next week. Urban Outfitters, a longtime Fila partner, will sell a tighter, more utility-based assortment.

Explore offers colors and logos that take their cues from each subcategory. Canyon, for example, has an off-white and chocolate color palette with pops of orange and blue, while Woods offers darker hues such as black accented with teal and purple. Mountain is blue, orange and yellow and Elements has black, gray and rainbow colors. 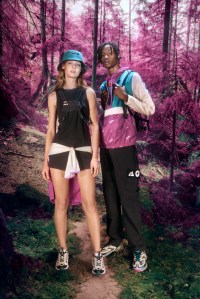 The Woods collection has a darker color palette.

Fila used several variations of its logo, including one of a mountain. Several of the pieces include a graphic of a map with the date 1911, the year the brand was founded.

The apparel will retail for $35 for a tank top and $95 for a wind jacket to $110 for a terrain anorak. Accessories will include $8 socks and $75 backpacks. Footwear will range from $45 for a women’s Drifter sandal to $100 for a men’s Trailpacer.

In addition to New York City and Los Angeles, Fila will open pop-ups in London, China, Japan, India and Greece that will remain in place until Aug. 11. South Korea and Brazil shops will be added later this summer.

The pop-ups are designed to be Instagram friendly and will guide visitors through eco-zones inspired by the four categories in the collection. There will also be panel discussions with influencers and other on-site programming in the shops.

Last spring, Fila reintroduced its Mindblower running shoe, which was originally created in 1995, as well as a complementary collection of men’s and women’s apparel in partnership with 47 retailers, artists, influencers and designers. The success of that initiative, which included the opening of the first Fila pop-up in New York, prompted the brand to create Explore.

The sports label has been embraced of late by the fashion and streetwear crowd. Fila held its first runway show in Milan for its spring 2019 collection and the late Karl Lagerfeld used the brand’s logo on pieces for his fall 2018 collection for Fendi.