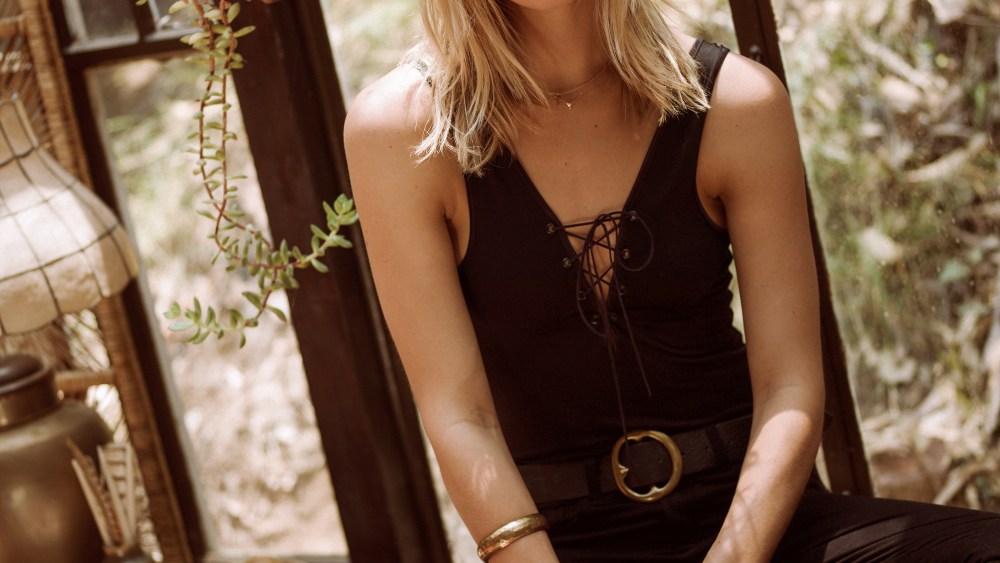 Set to debut at market on August 15, the men’s and women’s line is meant to capture the spirit of life in L.A. via contemporary classics such as cotton T-shirts, worn-in jeans and cashmere sweaters priced from $50 to $425 at retail.

“I’m not reinventing the wheel by any means. This line encompasses the feeling of L.A. and what it is to dress in L.A.,” said the brand’s vice president and creative director Shaun Hurley, an apparel veteran who last cofounded Genetic Los Angeles Denim.

Hurley started with the city’s iconic locales such as Laurel Canyon, Venice Beach and Sunset Boulevard and took inspiration from their fashions of the Seventies and Eighties. “I started with a pair of vintage women’s designer jeans and a bodysuit, like Farrah Fawcett back in the day. Then I threw a cashmere sweater coat over her, and it all went from there. It’s your favorite T-shirt, sweater and designer denim. It’s a look any woman can dress any way,” he said.

Classic t-shirts will retail for $50 to $60, fashion pieces for $90 and denim from $198 to $220, with some Japanese selvage and specialty washes prices about $235 to $265. “I want volume, to be honest,” he said. “I want the customer to be drawn by the feel and style, then to say, ‘Oh my gosh this is a great price point,’ so it turns into something you always have in your closet.”

Hurley has a soft spot for denim, having started out as a Levi’s fit model at age 16, then working the retail floor at Abercrombie & Fitch and moving to the buying department at Gap Inc. before becoming a denim sales rep and launching 575 jeans. For Fred by Fred Segal, he created the women’s Perfect Skinny, Sexy Straight, Irresistible Flair and Iconic High-Rise styles. For men, there’s the Bourbon Slim and the Whiskey Straight.

Hurley said he was led not only by eye-catching details — each top has signature neck tape in the back and the jeans logo is a simple black rubber stamp — but by the worn-in hand of his favorite vintage pieces. “At Genetic we were all about the hand-feel of the denim. This and the styling and fit are what help you buy it.”

Hurley is counting on retailers wanting to order now and sell now; the line is launching at market with fall immediates. “Now, people want to see and wear things right away. You can’t launch a new line and make people wait months to get the product,” he said. He is aiming for “60 to 100 of the best specialty stores in the U.S. and 20 key international doors.”

The line is currently 70 percent women’s and 30 percent men’s but Hurley wants to balance the ratio going forward. For spring 2017, he plans to add a sweats line, more bodysuits for women and swim trunks for men.

“It’s exciting to get to be the new voice of an iconic brand, one that’s never had its own collection,” said Hurley.

After its founding in Santa Monica in 1961, Fred Segal’s locations on Broadway there and on Melrose Avenue in Los Angeles became known for ferreting out new and noteworthy fashion and beauty brands. In 2012, the retailer was acquired by Sandow and is now owned by an investment group that includes Sandow and Evolution Media Partners, a venture of Hollywood talent agency CAA, private equity firm TPG Growth and Participant Media. The Santa Monica location has since closed and new stores have opened in Tokyo and Yokohama in Japan.