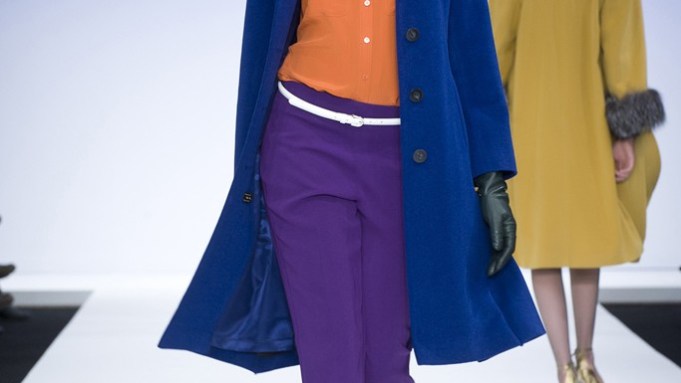 To lift sales, some retailers played up more affordable options like accessories and fur-trimmed pieces. Others said they catered to customers with their storage and renovation services.

Carl Fisher, owner of Kent Fisher Furs in Towson, Md., said sales were off 10 percent due to the warm weather. To try to coax shoppers along, the retailer added accessories and shorter jackets, which are more affordable pieces.

“There was no price resistance until the weather actually got colder toward the end of the season. But if someone’s in the market for a mink coat, that’s what they want,” he said. “However, if someone isn’t sure what they want, they may trade down.”

With higher inventory than usual, Fisher was looking for “spice” at NAFFEM instead of basics. “I’m also looking for fill-ins and to confirm price points,” he said. “Mink prices will be higher next season, and money is tighter, so people are aware of what they’re spending.”

Lazare’s Furs of Windsor, Ontario, has gone through a few changes recently at both its Windsor location and across the Detroit River in Michigan, where it closed its showroom in downtown Detroit a few years ago and replaced it with an agent in Southfield. “We bought out a competitor in Grosse Pointe Woods and renamed it Lazare’s of Grosse Pointe,” explained owner Paul Twigg. “We also moved our retail location from downtown Windsor to midtown by opening a space in Freeds department store, which gives us much more walk-in traffic.”

Although this past winter was “mediocre,” Twigg was pleased with sales at his Grosse Pointe store, due to a loyal customer base. “The Michigan economy is coming back and we’ve managed our inventory well, so if we see something trending off, like long-haired furs, we can adjust quickly,” he said. “We sold lots of jackets, and we’ve added a great cloth coat line made in North America from Italian fabrics. We’ve also added handbags and designer scarves in both locations to surround furs with related items, which have helped our business.”

Twigg was shopping NAFFEM for sheared and reversible mink and sheared beaver.

“It was a warm winter, and business reflected as much,” said Andre Ferber, owner of Jacques Ferber Furriers, a Philadelphia retailer. The warm winter left Ferber with more inventory than usual, but he said it was not “catastrophic.”

Despite the lack of frigid days and the uptick in mink prices, consumers were still spending, he said. “It’s hard to say why people buy what they do. There was more business in the less expensive furs, but that may have a lot to do with fashion rather than price resistance,” Ferber said.

The South, too, was affected by the unseasonable temperatures. Sales were down noticeably at Henig Furs of Montgomery, Ala., which has 30 stores throughout the Southeast. But the sluggish season was somewhat offset by business in Henig’s service department and its Internet business, according to owner Mike Henig. “We were very strong in storage, cleaning and remodelling. I’d say we were up 15 percent in March and April, while our Internet business was up by 40 percent. That tells me that furriers are not on every corner anymore, similar to manufacturing, which is a dying breed.”

Henig remains optimistic that the fur business will bounce back if the weather cooperates. “Fur is still strong worldwide, with record-high prices paid at auction. The good thing about fur is that it’s a beautiful and lasting product,” he said.

Even though retail sales weren’t as strong as last year, Henig sold a good deal of sheared mink coats, and cashmere and wool coats with fur trim. With mink prices on the rise, manufacturers and stores are offering more sheared beaver products as alternatives. “You can sell a very nice beaver product with fox trim for around $4,000 retail compared to a mink coat for $8,000 to $10,000,” Henig said.

Like Henig, Furs by Guarino in Green Brook, N.J., had a strong repair and remodelling business which made up for lackluster retail sales. Despite a poor season, inventory levels were good due to less ordering, according to owner John Guarino, who operates a second store in East Brunswick, N.J.

“But like everyone else, we had to take early markdowns,” he said. “We do some of our own manufacturing, so we were able to hold down mink prices. But we’re selling less long mink coats anyway.”

A few exhibitors noted a drop in show traffic at NAFFEM, including Allan Zuckerman, owner of Chosen Furs, Newbury Park, Calif. “Traffic is way down. In a good year, I’d be too busy to sit down and talk, because I’d be writing a lot more orders,” he said. “As manufacturers, we have to create new fashion to offer new price points with mink going so high.”

Despite slower traffic, Scott Bernstein, owner of Rendezvous NY, New York, said, “The customers are still out there, and it was encouraging to see some of them buying novelty items early. It was the buyers late in the season that weren’t there.”

The number of exhibitors was down slightly from last year because a few European resources did not show up, according to Alan Herscovici, executive vice president of the Fur Council of Canada, which organizes NAFFEM.

“They were hurt by the economy and Montreal is the last stop on the circuit and they know the U.S. economy is not back to normal,” he said. “But a number of Italian exhibitors are here, because they are going after the U.S. market with high-end shearling.”

While global fur sales for the 2010-2011 season rose 7 percent to $15 billion, most of that growth came from Asia and Russia, said Mark Oaten, chief executive officer of the London-based International Fur Trade Federation.

“We’re determined not to lose our traditional markets (to Asia and Russia) and to make sure design is not driven by Asia, which is different than Europe and North America. Asia demands more colorful furs. We’d also like to see a greater width of products and prices by seeing more accessories and trim,” said Oaten, adding that a marketing campaign highlighting fur accessories, young girls’ fashion and men’s fashion is in the works.