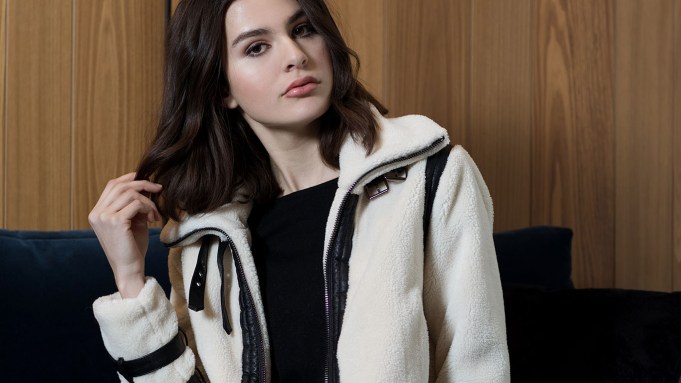 A  new contemporary knitwear collection called DH, designed by future mother-in-law/daughter-in-law duo, Jane Miller Saltzman and Jodi Scherr will be carried by Saks Fifth Avenue this fall, along with a handful of specialty stores.

Saltzman, who has worked in merchandising for Design History, a contemporary firm started by her husband, Brad, who is founder and chief executive officer, and Scherr, whose background is in retail, decided to launch a collection together after getting to know each other. Saltzman said they would talk endlessly in the Hamptons about fashion and trends, what they loved and magazines they read. “She was the daughter I never had,” said Saltzman, who has two sons.

“I always had this itch to be more on the creative side,” said Scherr, whose earlier roles were as an assistant buyer at Bergdorf Goodman for cosmetics, fragrances and sunglasses and an e-commerce merchandise assistant at Bloomingdale’s.

The fall collection features a curated selection of sweaters, tops and outerwear, combining femininity and classic minimalism with an edge.

Among the stand-out pieces are a luxe cashmere blend off-the-shoulder cable knit; an ultra soft sponge yarn sweater with a cinch up velvet tie at the hem; a flocked velvet lace combo blouse with chiffon ruffles; a cozy shearling jacket with moto accents; a scalloped chenille sweater in a bold fuchsia and refined navy, and scuba French terry ruffle bell-sleeve sweatshirt. The line retails from $150 to $300. The collection is manufactured in China.

The idea was to design a collection that can be worn during the day and then transition easily into evening with a pair of heels, Scherr said.

“Everything has a feminine twist to it,” said Saltzman, who said they are designing mostly for Scherr’s friends but also some of Saltzman’s age group. “My friends will wear it. I also want Jane’s friends to wear it. It’s younger, contemporary and fashion forward; it’s for the girl on the go who has a busy social life. It’s not age specific,” Scherr said.

In addition to Saks, the collection will be carried in several smaller specialty stores such as Shag in Roslyn, N.Y., Obligato in East Hampton, N.Y., Ravel in Westhampton,N.Y. and Kyle by Alene Too.

Asked if there’s anything awkward about working with your future mother-in law, Scherr said, “I always wanted to go into this, and it was the perfect time. Everything made sense.”