Vicky Tiel, a high-end designer known for sexy, elegant eveningwear, is seeking to broaden her audience. 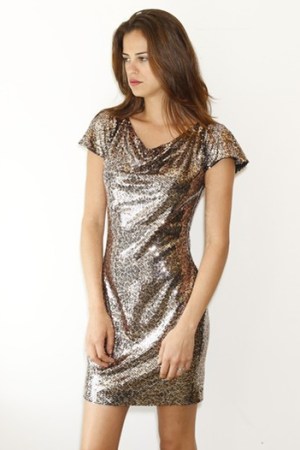 Vicky Tiel, a high-end designer known for sexy, elegant eveningwear, is seeking to broaden her audience.

G-III Apparel Group Ltd. has signed a master license to manufacture and market eveningwear, dresses and other categories under the Vicky Tiel label.

The first collection is being introduced for holiday, targeting stores such as Neiman Marcus, Saks Fifth Avenue and Nordstrom. The Tiel dresses for G-III, which retail from the high-$500 range to $1,600, are reminiscent of Tiel’s couture gowns that are sold exclusively at Bergdorf Goodman and Neiman Marcus. Those gowns range from $5,000 to as much as $25,000.

Tiel’s line for G-III features many of her signature details, such as tight-fitting bodices, ruching and draping in both long and short styles. The collection is produced in China, with fabrics sourced from all over the world, and features silks, satins, tulle, sequins, jersey and lace.

Morris Goldfarb, chief executive officer of G-III, projected first-year sales of $4 million to $5 million, and said Tiel could eventually expand into categories such as outerwear and accessories.

“I’ve been doing couture for 46 years and I never wanted to do anything but, but the couture business is going down,” Tiel said in an interview. “I don’t sell half as many dresses as we did. Women who have lots of money don’t feel happy spending so much money.”

Tiel and Goldbarb are longtime friends. “I’ve been dressing his wife and [have] known him socially for over 25 years,” she said. “I never thought he’d have factories good enough to make French couture…[now] he went to the best factories.”

Eventually, Tiel said she would enjoy designing additional categories, including shoes and handbags.

Among the looks she’s most known for are “the bra dress, draped dresses, dresses with bones, the mummy dresses, ruched dresses and those draped from top to bottom,” she said. “My look is in.”