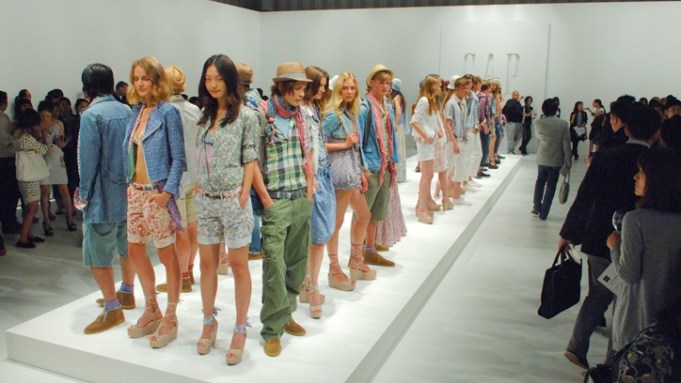 “I got the idea in my head that, when you have a brand that’s global…it’s actually really interesting to take the same collection and show it differently around the world each season,” Robinson said.

The previous two collections were presented in New York and London, respectively. “The show in New York was this very cool, classic, optimistic show. The next one was in London, which was a little more sophisticated. And then, coming and taking the same clothes to Japan, we’re actually seeing a lot more layering going on,” explained the designer.

The three cities were chosen because of their status as international fashion capitals and centers of Gap’s worldwide market. The next show in the series is slated to return to New York, but Robinson is having second thoughts. “As I’ve been doing it, I sort of have ideas I might do it somewhere else…maybe in one of the new markets that we’re opening stores in,” he said. Those markets include China, Thailand, Russia and Turkey.

“We’re all so superconnected. A lot of our stores are in big urban cities, and all of my friends now are all around the world,” said Robinson. “But they’re texting me and e-mailing me, and we’re all connected. But we’re also all trying to get back to nature. We’re all starting to care about what we drink, and the food we eat, and where that food comes from. There’s something about us that’s longing to be back in nature. Those two things are sort of at odds with one another, and what I like about this collection is it sort of brings them together.”

In addition to the global collection, about 20 percent of the pieces shown will be exclusive to Japan, including denim overalls and fitted, tailored jackets. “I get more inspired by hanging out on the streets [in Tokyo] and seeing how people dress,” said Robinson. “Tokyo is just this fascinating melting pot of street culture. Especially the way men dress — I find [it] really inspiring, because there’s nowhere else in the world that guys actually take that much time and expression with their clothes.”