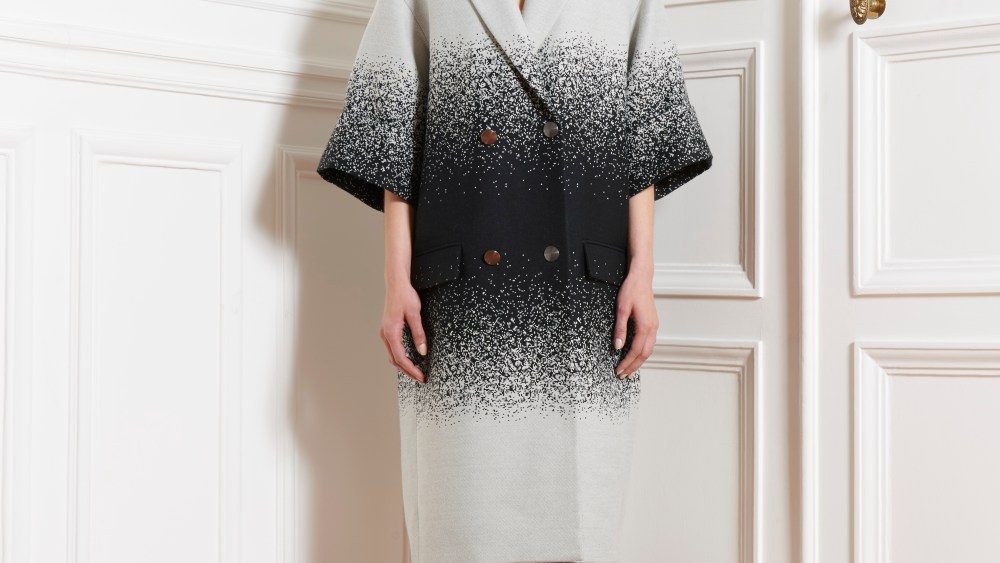 The French designer revisited classic house codes, such as trouser suits, houndstooth and vinyl, with an emphasis on innovative fabrics and prints. “I brought to it a form of sophistication and femininity in the pleating, the fabrics, the graphic design and also the colors, which I wanted to be radiant,” she told WWD.

Thus, the blown-up houndstooth fabric on a skinny trouser suit has been shot through with silver thread, while other materials feature digital-inspired dégradé effects on items including a chevron wool jacket that veers from black to gray, or an oversize cream coat with a pixelated black midriff.

While Phung mostly stuck to a sophisticated palette of black, white and gray, she also added pops of poppy red and electric blue, as well as an abstract floral print. Technical fabrics were left unlined for greater ease of movement, while lamé and sequins take the outfits from day to night.

“It remains wearable and classic, and at the same time, it’s beautiful in the unexpected combinations of fabrics or colors,” she explained.

Phung worked on the collection for several months, and will now turn to her next project — taking over as director of creation at French fashion label Leonard at the end of May.

A graduate of the Institut Français de la Mode, she launched her own label in 2011 and has worked as a freelance designer for brands including Vanessa Bruno, Baby Dior, See by Chloé and Lacoste.

Though she no longer stages runway shows, the designer continues to produce her own line featuring limited-edition pieces designed in collaboration with contemporary artists, some of which are on show at Galerie Joyce in Paris until May 16.