The shirts have names such as The Verb, The Preposition, The Dangling Modifier, The Conjunction and The Split Infinitive. 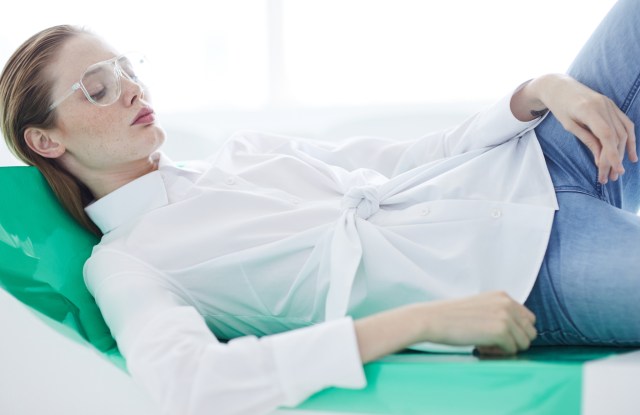 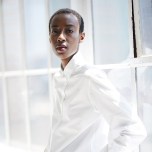 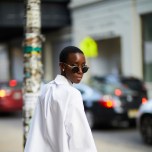 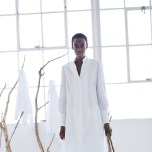 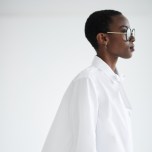 The collection will be available for pre-order on Kickstarter starting Sept. 5, and then will be sold exclusively on Grammarnyc.com, beginning in November.

The five shirts, which have names such as The Verb, The Preposition, The Dangling Modifier, The Conjunction and The Split Infinitive, are made by hand in New York’s Garment Center and are available in sizes 0 to 12. Orders placed early in the Kickstarter campaign will receive a discount (15 percent off the purchase of one shirt, 20 percent off the purchase of two to four shirts, and 25 percent off if all five styles are purchased) from the planned $150 to $250 retail price points. Orders will be shipped to customers eight weeks after the Kickstarter funding.

According to Althea Simons, founder and chief executive officer of Grammar, “Not a lot of fashion people use Kickstarter. I’m using it to collect pre-orders so I don’t have as much inventory risk. I needed to raise money to produce, and I’d rather have it come from pre-orders.”

The first collection contains shirts made of 100 percent sustainable organic cotton poplin from India. The Verb shirt ($150), for example, is men’s wear-inspired with bust darts and a center back seam, while the Preposition shirt ($195) has a swingy body shape, curved hemline and three quarter sleeves. The Dangling Modifier shirt ($250) is an extra-long style with side slits and back vent featuring gathers at the shoulder, floating darts and cuffs with slits and no buttons, a V-neck and stand collar.

Simons said she wanted to do something really focused and using one fabric, from a supply chain perspective. “It was an interesting design challenge. I love white shirts. People can easily grasp the concept. People who like white shirts, like white shirts,” she said.  She said she has plans to do different products in the future.

“After white shirts, I want to do black pants, black blazers, I’d love to do sweaters and outerwear,” said Simons, who feels strongly about creating a system of dressing.

Simons said she views her shirts as “a wellness product.”

“We are bombarded with so many stressful decisions every day, getting dressed shouldn’t be one of them. Taking that aspect out of your life reduces decision fatigue and stress. Wearing organic means you don’t have chemicals against your skin — the largest organ in your body — reducing your toxic load,” she said. She explained her goal is to create a minimalist work uniform consisting of structural, stylish separates made with sustainable materials.

Simons received an MBA in Entrepreneurial Management from Wharton in 2016, and before that earned a B.S. in neuroscience from Brown and an A.A.S. in fashion design from The New School’s Parsons School of Design. She previously worked as a designer at Yeohlee Inc. and as a sales associate at Issey Miyake.

She said what inspired her to launch a fashion business was a fire that occurred in her apartment while she was a student at Wharton. She lost all her clothing, including some vintage shirts she had. “I had to buy all new clothes, and when you need to find clothes, they’re so hard to find.” She said it’s always been her dream to have a sustainable fashion company, and she figured after the fire, if not now, when?