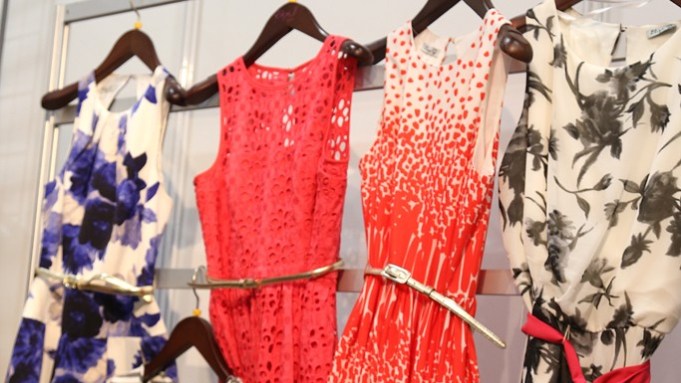 Don’t rule out big and bold prints just yet — graphics ranging from geometrics to florals were the favored patterns for spring.

That’s the word from the Moda Manhattan and Fame shows, held at the Jacob K. Javits Convention Center from Sept. 17 to 19.

Melissa Bower, sales representative at Cubism, was showing printed T-shirts and dresses in bright colors using a cotton-rayon blended fabrication. She said graphics, big last season, continue to be strong for spring. Florals were in demand, as were some of the geometric designs, she said.

At David Cline, part of the Dressed2Kill exhibit, sales representative Jennifer Gawronsky said khaki and coral are two colors that were gaining in demand, although the aqua blue and turquoise color ranges “are generally the first colors that are reordered by my accounts.” Many of their accounts are located in the Sunbelt region or are resort-focused boutiques. The firm sells tops, many featuring three-quarter sleeves, in rayon-cotton blends that can easily be packed for traveling. Wholesale prices range between $39 and $54.

Carrie Hanlon, which owns Tampa, Fla.-based Finch, added a wider assortment of bottoms to this season’s collection. No longer primarily a tops and tunics line, the collection features lattice and floral prints along with solids for ease in mixing and matching of items. The colors primarily represented in the line were grass green, aqua, hot pink and bright orange. The prints evoke a Palm Springs or Palm Beach mind-set. Most items sell for between $38 and $85 wholesale, and are primarily either cotton voile or duck cloth cotton. Newly introduced for this season were a few items in linen.

At Eliza J., the line showed a wide selection of dress options from solids to floral prints, as well as cutout patterns evoking an eyelet look. Length options vary from midthigh to maxis, with wholesale price points between $59 and $99.

Ferruh Lermi at Seratex Global said patterns and prints also were being featured at LBisse’s dress line. One key item highlighted for display was a black sequin dress featuring a slightly fuller skirt that wholesaled for $64.

While much of what showed at Moda was for spring, there were a number of companies showing items for immediate deliveries. One firm was Dena Products, which showed both real fur vests and jackets and its fake fur line, Faux Frenzi by Dena. At its Faux Frenzi display area, where many buyers were sifting through the items, shawls were wholesaling for $19 to $39, while vests were between $45 and $75.

One vest in particular — available in brown, black and a leopard print — was a favorite of Saks Fifth Avenue, according to Iris Rubin, who was representing the Dena lines. Rubin, who modeled the item, said one high-end luxury retailer placed an order for 4,000 pieces for September, October and November deliveries, with the possibility of another 400 for December shipment. The vest wholesaled for $60. That’s in contrast to the wholesale prices of the real fur vests and short jackets at the Dena display area, such as a knitted mink vest that wholesaled for $395.

At Fame, one exhibit that attracted many buyers on the first day of the show was Cecico. Joseph Kim, of the Los Angeles-based firm, said buyers were looking for immediate deliveries. His exhibit was showcasing metallic cable sweaters that wholesaled between $15 and $20. Longer-length maxi sweaters were popular, he said.

One new trend is the waxed look for sweaters, with wholesale price points between $16 and $24. That’s a look that originated from the waxed denim bottoms that first showed in spring for fall 2014.

“Metallic will continue to be on trend for some seasons to come,” Kim said. He expects it to be an even bigger trend next year. That’s because many of the high-end firms are starting to include it in their collections. “That market influences the lower end,” Kim said.

At the Timing-Lumière exhibit, sweaters in prints, both Aztec in design and geometrics, were expected to receive orders from buyers interested in immediate deliveries, said sales representative Brenda Ramirez. The wholesale price points were between $8 and $10 for the lower-end Timing line and between $10 and $12 for its higher-end Lumière brand.