Every piece is hand-sewn at his Los Angeles studio-turned-production facility. 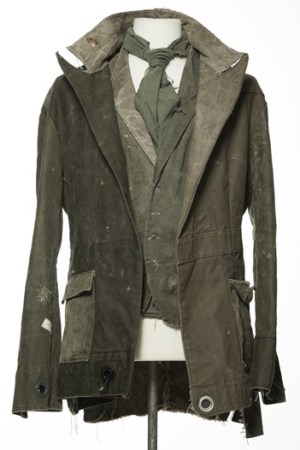 Artist Greg Lauren is launching a men’s and women’s collection this month at stores such as Barneys New York, Maxfield in Los Angeles, Blake in Chicago, Linda Dresner in Birmingham, Mich., and Susan in San Francisco.

Lauren comes to the fashion world bearing a loaded last name: His uncle is Ralph Lauren and his father is Jerry Lauren, executive vice president of men’s design at Polo Ralph Lauren. But the 41-year-old artist-turned-designer hardly set out to capitalize on the family name. Rather, this retail collection is more of an extension and evolution of Lauren’s paintings and paper sculptures — which often explore themes of identity and iconography — and less a strategic business foray into the stores that sell his uncle’s wares.

“Two-and-a-half years ago I learned to sew in order to create ‘Alteration,’ an exhibit consisting of 40 sculptures of the most iconic men’s wear garments,” explained Lauren, who has a degree in art history from Princeton and spent his early postcollege years pursuing an acting career before turning to art. “I was exploring the powerful archetypes that help shape our sense of self and image. That same desire led me to want to create real clothes. I just look at it as a new medium.”

The collection that Lauren created mostly comprises outerwear, with many pieces fashioned from repurposed vintage material, such as military duffel bags, sailor uniforms and Army tents. Styles include blazers, tuxedo jackets and field jackets, in both men’s and women’s silhouettes. Lauren’s wife, actress Elizabeth Berkley, was the first recipient of one of the budding designer’s jackets, sewn with his own hands.

“I’m a bit obsessed with our universal obsession with military clothing — the idea that we all want to look like soldiers, without actually being one,” he noted.

As the collection relies on vintage fabrics that are reclaimed and pieced together, every piece is unique — and everything is hand-sewn by Lauren and a group of artisan sewers he’s assembled in his Los Angeles studio-turned-production facility.

“Every single piece goes through my hands at some point. I want the fingerprint of a human being on the clothing. It’s exhausting, but we’re having a blast doing it,” said Lauren.

Prices range from $1,875 for a jacket made from old Army tents to $3,125 for a washed and destroyed cashmere tuxedo jacket with silk lapels.

Barneys will unveil a window at its Madison Avenue flagship dedicated to Lauren on Wednesday, and the designer will make a public appearance on Saturday. The collection will be carried in the company’s New York, Beverly Hills, Chicago and San Francisco stores, as well as at barneys.com. It will be merchandised next to collections such as Lanvin, Balmain and Thom Browne.

“When I first saw the collection, I knew in a New York minute that this was something very special,” said Tom Kalenderian, executive vice president and general merchandise manager of men’s and Chelsea Passage at Barneys New York. “Each piece is executed like a puzzle, and at the end of the day, the clothes are amazing and just look beautiful on.”

Kalenderian was so impressed with Lauren’s work at that first meeting that he brought Barneys chief executive officer Mark Lee to Lauren’s New York studio the following day to meet with the artist-cum-designer.

And what does the Lauren clan think of the newest designer in the family? “I think it’s great, and I believe it was inevitable,” said Jerry Lauren. “Greg was always brilliantly creative, and I watched him absorb my passion for quality, style and heritage. This is an extension of his art and his own personal style born from what he observed, and his life in the studio, and reflects the themes and ideas he explores in his artwork.”