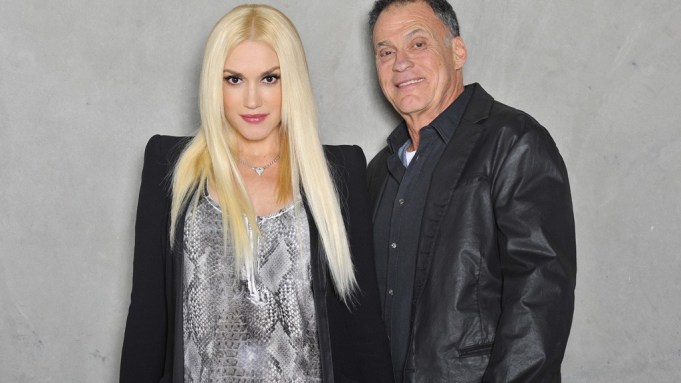 LOS ANGELES — If a musical style icon and a manufacturing guru have their way, jeans could be taking a backseat in women’s wardrobes come spring.

Gwen Stefani and denim guru Michael Glasser have teamed up to create DWP, a nondenim line that aims to supplant the five-pocket staple by filling the void in women’s wardrobes for casual clothes with chic attitude.

DWP, which launches at market today for spring delivery, is an 18-piece collection wholesaling from $80 to $130.

The name was conceived when Glasser and Stefani, who both are represented by United Talent Agency, initially planned to launch a sustainable premium denim line that required no heat and only a gallon of water to produce. Hence, the Department of Water and Power acronym.

But at September’s Coterie show, Glasser, a 40-year apparel veteran who cofounded Seven For All Mankind jeans with Jerome Dahan in 2000, knew for sure that it wasn’t the right moment to launch another denim line.

“A buyer from Neiman Marcus came up to me and said, ‘If you show me another five-pocket jean, I’m going to punch you.’ So I thought, ‘Do I really want to show a new jeans line? I don’t think so.’ I called Gwen and said, ‘I’m not sure it’s the right time.’ So we flipped it to Design With Purpose because the purpose of this line is to start defining an exciting area like we did with the jeans,” said Glasser, who sat with Stefani in his Vernon, Calif., factory where he makes his denim brand Rich and Skinny. He was wearing black coated jeans and a denim shirt he made for himself, while Stefani was clad in a snake-print top and pants from DWP, as well as boots from her L.A.M.B. line and a Barbara Bui jacket.

The once-hot denim market has cooled of late, leaving retailers with copious amounts of floor space that isn’t pulling in the dollars it used to. “Denim is usually the biggest profit center of a store. If jeans are good, stores are doing great,” said Glasser. “Now it’s a struggle because they don’t have this go-to. So it’s not like buyers can say, ‘I can make money here, so I can take a risk there.’ It’s unfortunate because it backs everyone up, creativity stops, stores don’t look great. The purpose of this company is to step into a place that we believe will encourage the business to get better, take the pressure off jeans, give it a rest. There’s no question jeans will be there, but the scale has to be balanced. The moment is now.”

The key to DWP is the pant: a slouchy, slightly tapered, cropped trouser (reminiscent of a silhouette Stefani has long favored) made of Tencel treated with the same cutting-edge coating, dyeing and washing techniques used on premium denim. The results are soft, lightweight and drapy, with asymmetric zip-flies and cuffs that can be worn rolled up or down. Glasser notes: “All you need is one pant in the world of bottoms. You can take that and rock it to the moon.”

Named the Gwen, Drew and Leah, the treated Tencels mimic black leather, brushed silk or broken-in denim (there is actually one style made from ultrathin, light blue denim). Stefani’s influence is evident in the camouflage and snake-print versions, patterns that extend to the tops: high-low tanks, motorcycle vests and cropped T-shirt styles also made from Tencel. Other Stefani signatures include pops of orange-red and a black-and-white chevron print made by applying black coating to a white burnout fabric.

Said Stefani: “I’ve been spoiled being in the fashion business. My son will be like, ‘Mommy, 20 new pairs of shoes came today. How come?’ Because I’m always telling him it’s not normal to have 20 pairs of tennis shoes to try on before school. People have like one or two. But at our house,” she laughs, “you have access to all these clothes from all your lines. It’s like my dream, and a lot of it is stuff I actually dreamed up. But I’m always still missing those pieces and it’s so annoying, and I don’t mean to be greedy, but it’s the same with everyone. I’m like, ‘OK, am I really going to wear that again?’ So this is about trying to find that piece that is super wearable but you still feel cool in.

“I was trying to get all the basics. Michael nailed the bottoms. For tops, I was trying to think about what I wear besides a tank top. I love cuffed-up sleeves, tops that are long in front and short in back. And we did a jumpsuit and a dress to fill in the gaps.”

Stefani said she wasn’t casting about for another fashion line; her contemporary clothing and accessories brand L.A.M.B. is a decade old, and younger brand Harajuku Lovers is eight years old. Her initial aim was to team with Glasser to enter denim. But she’s come to love the immediacy of creating a small collection in her backyard. The first samples were created a mere two months ago.

“What’s so great about DWP for me is it’s different from anything I’ve ever done, working in L.A. and having the factory right here,” said Stefani. “With L.A.M.B., we have so many categories within the collection and you have different factories that do specific things, so you are a little detached. And denim is a category I’ve never touched. The techniques are very complicated, and I don’t think they’ve ever been used on these kinds of fabrics. But the actual designs are very simple because it’s all about everyday wear. So that’s different and new.”

For his part, Glasser said, “Working with Gwen is a whole different experience on the level she’s at as a known person. She brings a woman’s point of view and a distinct look. It’s important to have each other as sounding boards so we can accomplish the same thing coming from a different place.”

“He’ll try anything in the laundry. It’s like some crazy art project,” said Stefani of Glasser’s willingness to experiment with denim techniques.

“The thing about trying is, you never know. Some of the greatest mistakes I’ve had are the best sellers. When I did Seven with Jerome, the first four washes were mistakes. They’re still selling those mistakes 14 years later,” said Glasser.

Added Stefani: “It’s like every single one of my records. Every song has been a series of mistakes, accidents.”

Stefani’s agent, Lisa Jacobson, broke away from her phone for a moment to point out, “It was also serendipity, Gwen, because you had the time.”

Stefani noted, “If you had come a year ago, when I was putting the No Doubt record out, there was no way I could do another project. When I’m writing, it’s really hard for me to do the music and the line. Then other things happened to me that are very obvious,” she said, looking at her seven-months-pregnant belly. “But this timing was really perfect for me because I now have a window of time to do this.”

The rest of 2014 promises to be hectic for Stefani. “We are doing a cartoon for Harajuku Lovers, which is a 52-episode girls cartoon that is insane, it’s so cute. I did the collaborations with OPI and Burton. Harajuku Lovers has a new fragrance coming out, L.A.M.B. is launching e-commerce and musicwise I have some things I’m figuring out. I’m just really happy we got to this point with DWP and that it has so much more potential.”

Glasser said he wouldn’t be surprised if DWP did $5 million to $8 million in sales in the last six months of this year. “It could be a $60 million company by its third year,” he said, “but it’s not about how much business we do, it’s about who we sell, and if I have my druthers, we won’t overexpose. I don’t want to be in all department stores.

“The fact that we are doing something new means buyers have no reference point, which makes it a challenge for them to believe what we do,” he added. “But it’s exciting to think we could be on the forefront of another explosion.”