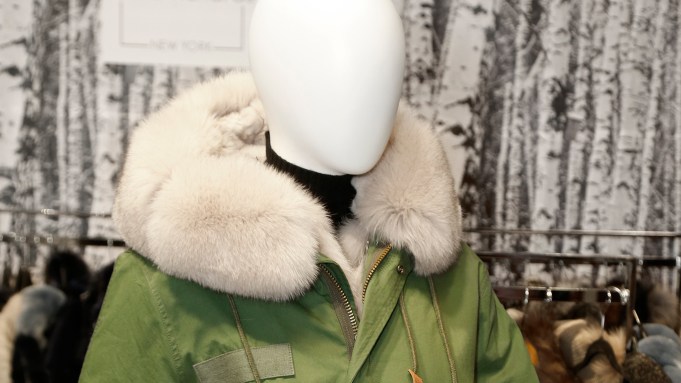 Intermezzo, which ended its three-day run at the Jacob K. Javits Convention Center Tuesday, was a small show, but got positive feedback from vendors and retailers.

The event featured new sections such as Blue @ Intermezzo, which included premium women’s denim for immediate and fall deliveries from brands including Level 99, James Jeans, DL 1961, Lucky Brand and Hudson Jeans, and a new Vintage @ Intermezzo. Intermezzo partnered with Bridgette Morphew, founder and creative director of Morphew Concept to curate the vintage initiative.

“It was so much fun. It’s been quite an experience,” said Marissa Santalla, a spokeswoman for Norma Kamali, which showed the designer’s vintage collection at the show. “You can see her shapes [that she’s known for] mixed in with the vintage pieces,” she said. She noted that some stores were buying the pieces to mix into their contemporary space and diversify their offerings. Among the stores that dropped by were Great Stuff, Joan Shepp and Big Drop. The items were available for cash and carry. Santalla said what sold best were the suiting pieces, especially the jackets and some “great leather pieces.”

“It was a great overall experience. One of the goals is to get the word out that this is available. It’s also available on our web site,” she said.

Quality Street was selling items such as a Michael Jordan’s #23 Chicago Bulls jersey and Patrick Ewing’s #33 Knicks jersey, as well as vintage Polo Sport. “It was a good show. I met a lot of people,” said Joshua Stone, owner. He said he sold Grateful Dead T-shirts and Coogi sweaters. A lot of young contemporary niche retailers came through from New York, New Jersey and the West Coast. “It was a good experiment,” he said.

Another vendor, Morphew, was doing well with many of their pieces. “It’s going great. It’s being translated really well, although some people were asking if there were minimums for vintage,” said Martin Feinen, brand ambassador for Morphew. He said the vintage booth, which was cash and carry, has been great for building relationships with designers and other fashion people.

Lori Friedman, owner of Great Stuff, which has five stores in Scarsdale, Rye and Chappaqua, N.Y.; Westport, Conn., and Greenwich, Conn., thought the addition of the vintage area “was great” and especially liked seeing the Norma Kamali pieces. “They had beautiful things, but I know my customer, I don’t think I can sell the vintage, even though I think it’s beautiful,” said Friedman. She carries Norma Kamali’s current line in her stores.

She said they do a good job of making it look special. “The jeans section was nice, but there weren’t that many new lines [throughout the show].” She said she bought several things from Jet by John Eshaya, including some faux furs in cheetah and leopard. “They were just adorable.” She also filled in some pieces at Planet, such as cute solid sweaters.

Elsewhere at Intermezzo, Parker Black was having a good show. “For us, it’s a quieter show, but we were really steady and had a really good show,” said a representative for the brand. Some of the looks that did well were a draped front open shoulder halter, which retails for under $200. Parker Black also did well with an oversize sequin dress, a statement striped sequin dress and a fringe sequin dress. “We’re conscious of including sleeves and bell sleeves. It’s more transition and good for older and younger women,” said the representative. Another very strong seller was a feather sequin dress, wholesaling for $261.

Nanette Lepore was pleased with business. “It’s been really steady with lots of great accounts and new accounts,” said Henry Kessler, director of digital media, who was there to pitch in. Laura Reyes, an account executive, noted that the brand did well with their holiday collection. Particularly strong sellers were the printed dresses, lace tops, two-way sequin dress and burn-out tops.

Linda Richards, which specializes in fur outerwear and accessories, was very pleased with the pace of business at Intermezzo. “We had an amazing day yesterday. You wouldn’t think anybody has a problem at all. Fur continues to be very strong,” she said Tuesday.

Richards has done well with the utilitarian jacket with fur lining, which she said is geared to people who are wealthy, but don’t want to look wealthy. The fur can also come out. “It seems like shorter was more important than longer,” she said, although some longer lengths did well such as a big and oversized cotton utilitarian jackets with fur lining.

Anna Mancinone, owner of Body Talk, a 6,000-square-foot store in Avon, Conn. said she was shopping Intermezzo looking for newness. “I’ve been doing business with Linda Richards, and she always has fresh and new things.” Mancinone said she liked the camouflage fur. “All her furs are awesome. We retail them very well,” she said.

Overall, she said Intermezzo is a small show. “With business up and down on a daily basis, it’s a good show for catching up with some things,” she said. She bought a combination of fall and holiday looks.

Erin Moore, owner of Tu La Moore, a 7,500-square-foot store in Weston, Conn., was buying a Bardot fur jacket at Linda Richards, as well as a fur-lined down vest.

“I do like this show,” said Moore. “Majestic is always a winner and we bought some multicolor cashmere ponchos that were beautiful.” The ponchos come from Claudia Nichole Cashmere, and wholesale for $49.

John Eshaya of Jet by John Eshaya said he had a “really good” show and it was steady all three days. He sold a lot of faux furs, special sweatshirts, printed T-shirts, hand-cut sweatshirts and appliqués on sweatshirts. Most of what he sold was for fall. “All the good stores were here,” he said.

At Misa Los Angeles, an L.A.-based line, “our velvets always sell well for holiday,” said Abby Sharaf, account executive. She said the brand has done well with floral prints. “People have been loving them and they go well with black denim and leather pants,” she said.