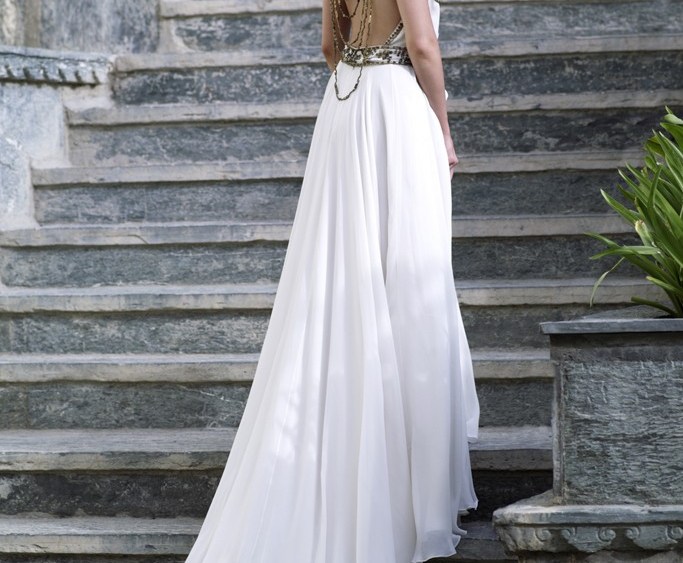 Despite a downswing in the overall Italian economy and consumer spending, the number of collections on the Fieramilanocity fairgrounds was up 11 percent compared with last year. Buyers and exhibitors here maintain Italy is still an important market, in terms of  both revenue and quality.

“We carry many Italian designers — Kleinfeld comes to this fair every year,” said Mara Urshel, owner of Kleinfeld Bridal, the upscale Manhattan store of the “Say Yes to the Dress” TV show, adding that the New York-based store offers a competitive array of fine bridal designers from around the world.

While the economy has been sluggish, anecdotally, the bridal segment seems to have escaped most of the pain.

“The [domestic] market has been shrinking slightly for a few years,” said Marco Serioli, exhibitions division director for Fiera Milano. He noted, however, that this trend has been offset by higher-end exports.

Urshel confirmed, “Brides in the U.S. want to look great. After they find the dress they are interested in, then they ask where it comes from. It always pleases me when I see that they appreciate the quality of an Italian-made gown.”

There are no individual economic figures recorded for Italy’s bridalwear industry, which is included in overall fashion figures, but anecdotally, vendors say Italians are still spending for wedding attire.

Foreign designers like Leila Hafzi, a Norweigan designer of Iranian descent; and Amanda Wakeley and David Fielden, both from the U.K., consider Si Sposaitalia a key opportunity to attract international attention and also keep their Italian clientele — Italy ranks among their top markets.

“Life still goes on,” said Jelena Govorusa, Amanda Wakeley Sposa retail manager. “Italians are still buying. This is one of the best shows in Europe.”

Wakeley, whose evening gowns have captivated A-listers like the Duchess of Cambridge, generates 25 percent of its sales from its bridal business. Italy is the brand’s number-two market, after the U.K., she said.

With business on the uptick, Wakeley will open a flagship on Bond Street in the near term, while on the horizon, it is interested in expanding more in Northern Europe, Govorusa explained.

Despite a downturn in consumer spending throughout Southern Europe, the brand, spearheaded by designer Lee Yang Sook, sees Italy as a potential market. Outside of South Korea, the brand’s top markets are China and Japan.

Designer Kerstin Karges of Berlin-based Kisui crafted more modern, nontraditional bridal dresses with lightweight fabrics and modern cuts and draping. Her company saw sales rise 40 percent in the first half of 2013 compared with the first half of 2012. Looking ahead, she is most interested in targeting high-end stores in Italy and Japan.

“Italy is the most fashionable market,” Karges said.

With an ethical-sustainable mantra, her designs are crafted with local silk from Nepal and eco-friendly silk from a factory in China.

Her brand, which is based in Norway, is looking to expand in the U.S., particularly San Francisco and Los Angeles, where she said brides appreciate her eco, romantic, bohemian bridal dresses.

“Let the quality and beauty speak for itself,” she said. “The ethical part is supposed to be a bonus.”

Also on the brink of spreading its wings in North America is Kleinfeld. Part of Urshel’s visit to Si Sposaitalia was dedicated to scoping out designs and brands for a Canadian clientele — Kleinfeld in 2014 will open a 25,000-square-foot bridal salon in Hudson’s Bay’s Queen Street flagship in Toronto.

In terms of trends and styles among Italian designers, there was no shortage of traditional designs to meet simpler tastes or bedazzled, studded designs for an edgy bride. This year, though, lightweight fabrics, quirky accents, no-nonsense piping and bustiers were key.

Convertible: Valentini, established in 1966, showcased formal gowns with embroidered necklines, while its more modern, edgy line Egó offered styles with detachable shoulders and gowns in which the bodices and skirts detach.

Bohemian Princess: Leila Hafzi’s collection was inspired by the natural landscape and flora of Nepal. Colors like lavender haze, red hibiscus, emerald green and peach rose added a calm splash of color to her 2014 collection.

Peplums: Peplums jazzed up the Hollywood set this year, and the bridal market is no exception. Tosca Spose, which churns out silky traditional collections, highlighted modern cuts with a peplum kicker. Lace was a star at David Fielden, but a romantic twist on the peplum offered a modern touch.