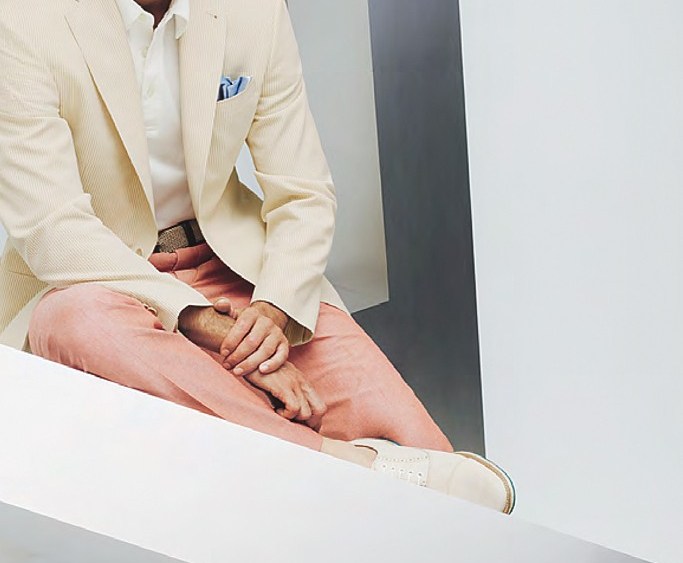 On Friday at noon, more than 850 people will exit the Jack Victor offices and manufacturing facility in Montreal for their annual three-week summer vacation. But instead of racing off, they’re going to be asked to stick around for an hour while the city of Montreal closes the street and the entire company dons a Jack Victor T-shirt and poses outside the offices for a group picture. That photo will be featured in a commemorative book that will be published in January to celebrate the centennial of the tailored clothing brand.

Today, the brand, which is still family owned and operated, remains a major player in the North American men’s wear market, with its branded and private label clothing carried at more than 650 better department and specialty stores including Saks Fifth Avenue, Nordstrom and Barneys New York. In addition to the Jack Victor collection, the company also owns the Riviera brand and has the license for Ted Baker clothing.

To celebrate its milestone birthday, the company has produced a centennial collection of men’s suits, sport coats and trousers for the spring season that will have its debut at the MRket show in New York City on July 22. The limited-edition collection features semitraditional, half-canvas garments that will retail for about 20 percent higher than the company’s regular line. It will be offered in an exclusive array of 50 high-end fabrics from such mills as Loro Piana, Ermenegildo Zegna and Carlo Barbera. The garments will have a special label and lots of bells and whistles. It will be hung on a purple velvet hangar and delivered in its own customized garment bag.

The collection will have its launch at the Saks Fifth Avenue flagship in New York this spring.

“They produce a very nice garment with a lot of value and an exceptional make,” said Tom Ott, senior vice president and general merchandise manager of men’s wear for Saks. “Their factory in Montreal is fantastic. They employ a lot of Italian workers, so there’s authenticity there and they make a top-quality garment. They’ve been a great business partner and we thought we’d do something nice to celebrate their 100th anniversary.” Ott said the flagship will offer the centennial collection, feature it in its windows and host an event at the store this fall. “It’s a really great offering. There’s a lot of hand detailing, special labeling and the fabric selection is great.”

Alan Victor, grandson of the founder and the current president of the company, said the collaboration with Saks is a “tremendous vote of confidence for us.” He said he’s hoping to forge a similar partnership with a major Canadian retailer as well.

“Less than 1 percent of companies make it to the third generation,” Victor said. “But we’ve adhered to the same principals of value, quality and conservative prudent management that my grandfather established. There’s really no secret to these kinds of things. It’s just a matter of being consistent through 100 years.”

The company’s story began in 1913 when Jack Victor emigrated from Europe to Canada and started traveling the countryside selling clothes out of a knapsack. He opened a store and was successful as a retailer until one of his vendors convinced him to move to Montreal and work for him. Victor eventually bought the business and has been producing in that city ever since.

In 1958, Jack’s son Herschel was convinced to give up his dream of working in show business to join the family business and he remained active until his death in 2010, at which point his son Alan took the reins.

Despite its age, Jack Victor has managed to keep up with the times. “We’re not an old-fashioned clothing company,” said Paul Diamond, president of Jack Victor USA. “We’re importing soft sport coats from Portugal, we have a license with Ted Baker and we bought Riviera trousers and are expanding it into a lifestyle sportswear line. We’re not just sitting here waiting for the bell to ring.”

In Diamond’s opinion, Jack Victor produces the “best value and quality garment for the price.” The off-the-rack suits retail for $695 to $1,100, which represents the opening price point for luxury stores and the high-end offering for midtier retailers, according to Nelson Suriel, vice president of U.S. sales.

In addition, the company, which does two-thirds of its business in the States and one-third in Canada, has an extensive in-stock assortment of suits, sport coats, trousers and separates. “We hang millions of dollars worth of inventory,” Diamond said.

The biggest growth category for the company is its custom offering, where suits can be delivered in as few as 10 days.

“We do very modern clothing and that’s growing in the U.S.,” said Diamond. “Canada is more fashion-forward, so that’s our forte.” The company is known for its soft shoulder and light construction in a variety of silhouettes and linings. Interior components include canvas chest pieces, interlinings and shoulder pads, and the garments sport genuine horn buttons.

“We also do more traditional clothing for the rest of America,” Diamond said. “So we can fill any need for any customer who walks in the door. For specialty stores, we offer a large variety [of styles and fabrics] so they don’t have to run to 10 different places. And the almost-400 specialty stores who sell our goods appreciate that.”

In addition to Saks, Jack Victor will be offering the centennial collection to all its accounts. There will be one model of suit, which Suriel said will be a “fusion of classic and modern” styling, with a three-inch lapel, a 30-inch jacket, 6 1/2-inch drop, suppression around the waist, a rounder shoulder, slimmer sleeve and flat-front pants. “It’s modern, but not designer,” Suriel said.

The fabric collection will range from super 160s from Zegna to super 150s from Barbera in solids, stripes and plaids, and super 140s in bird’s-eye and windowpane patterns.

“There’s a lot of old-world engineering as opposed to an engineered garment,” Suriel said.

The suits will sport the brand’s signature purple lining embossed with the Jack Victor name, scalloped facing, contrast stitching, viscose sleeve linings, engraved buttons, contrasting pen and cell phone pockets, and pick stitching. The garments will be delivered with custom basting thread on the shoulders and vents to “give it a bespoke look,” Suriel said. Trousers will feature a split waistband with pick stitching, legs lined halfway down with the same fabric used in the sleeves, and other details such as reinforced pockets.

Sport coats will be offered in fabrics ranging from Loro Piana’s Cashmere Cloud blend of 93 percent cashmere and 7 percent silk in herringbones, soft windowpanes and plaids; 100 percent worsted cashmeres from Italy in an array of soft blues and grays; super 170s from E. Thomas in solid navy, and super 130s from Piacenza in linen-wool-silk blends.

All of the product will feature a Limited Edition Cennential Collection label, signed by Alan Victor. Suits will retail for $895 to $1,095 and sport coats will sell for $750 to $1,095. There will also be a small offering of trousers in cashmere cotton blends and wool fancies.

The centennial collection will be produced for two seasons, Alan Victor said, but if successful, will be continued beyond that, albeit without the centennial moniker.

In addition to the collection and the commemorative book, Jack Victor has formed a collaboration with the Juvenile Diabetes Research Foundation, a charity active in both the U.S. and Canada. In September of 2013, the company will donate a percentage of its sales to the foundation. Jack Victor also expects to throw itself a party in New York next summer during market week.

Looking ahead to the next century, Victor said the company hopes to expand into Asia, South America and Europe. “Everything is becoming more international and the world is getting smaller and smaller,” he said. “We believe we have a special and unique product that will be accepted well around the world. We’ve always been seen as just a North American manufacturer of tailored clothing, but in the next 100 years, we want to change that vision to a purveyor of men’s fashion, and not just in North America.”