The costume designer has teamed with contemporary brand for its first collaborative collection, which is set to debut at Coterie next month. 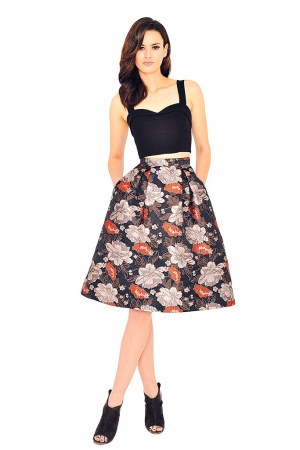 The 25-piece capsule Janie Bryant for Black Halo collection is made up of the brand’s signature solid-dress silhouettes, plus a jumpsuit, jacket and trenchcoat cut in the richly colored, patterned and textured fabrics favored by Bryant, the costume designer of “Mad Men.” The pieces will retail for between $300 and $500, and the collection is slated for a July 31 delivery.

Bryant, who has designed a “Mad Men”-inspired line for Banana Republic and an accessories collection for QVC, has been a fan of Black Halo since first wearing the brand for a photo shoot years ago. She also wore a white Black Halo jumpsuit to the one-year anniversary of Giorgio’s, a disco party where her friend, stylist Tod Hallman, introduced her to Black Halo’s marketing director. “I told my branding agent at Matchbook that I wanted to do a collection for them that night,” recalled Bryant.

Click Here for a Slideshow of Celebrities Wearing Black Halo >>

Founder Laurel Berman, also a Giorgio’s regular, quickly agreed. “I’m a huge ‘Mad Men’ fan, and there’s such a connection with our brand in the sense that we are classic, with a lot of pencil dresses,” she said.

While the capsule features some of Black Halo’s most popular sheath and cropped top/full-skirt silhouettes in Bryant’s favorite Baroque and Rococo-style floral jacquards, some pieces, such as a light-blue floral-embossed Neoprene dress or a faux poodle-fur jacket, push the brand’s envelope.

“I wanted to nurture Janie’s own point of view because I knew it would be pretty, but her own. It gives our collection another layer and hopefully draws in a new customer, too,” said Berman.

The 10-year-old Made in L.A. brand, which retails in 600 doors worldwide, including Neiman Marcus and Bloomingdale’s, is poised for growth in 2015, and Berman hopes the collaboration will be the first of many.

“We’ve been an indie brand for 10 years, and it’s time to take it to the next level,” said Berman, who, with her husband, Sean Pattison, owns the company and the 15,000-square-foot building that houses its downtown headquarters. “We opened our own showroom in New York 15 months ago and took sales in-house, which wasn’t easy. But now the trajectory is set for international expansion in countries we do well in — like Ireland, Spain and Germany — and we’re dying to get into Russia and South America.”

For Bryant, who has more projects in the works as well as her Shoes of Prey line, the Black Halo capsule presents another, post-“Mad Men” opportunity to define herself with a modern product. “I’m also very hands-on and want to be able to see samples immediately because I’m used to that process as a costume designer. So, I loved working with a local brand,” she said.

In addition to becoming a go-to day-to-dinner resource (Black Halo Eve gowns launched two years ago), the brand has found a foothold in Hollywood with celebrities ranging from Ariel Winter to Jessica Lange. Said Berman, “Our motto is ‘Two inches taller, five pounds thinner,’ because that’s how women feel in our dresses. They feel confident, whether they’re closing a deal at work or going on television.”