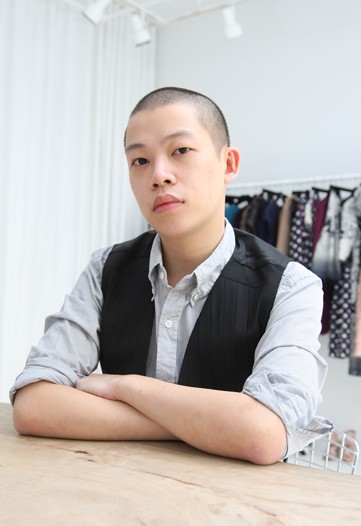 On a cold night in January, designer Jason Wu’s entire world changed dramatically in a matter of just a few seconds. In one of the most anticipated fashion moments of a long time, First Lady Michelle Obama stepped out at the Neighborhood Inaugural Ball wearing his off-the-shoulder white dress he had carefully embellished with organza flowers and Swarovski crystals.

What a difference a dress makes. Within minutes, CNN was calling his home phone to get the designer for a live segment; the Today show was trying to track him down both at home and in his studio, and close to 100 e-mails landed in his inbox. “My mother in Taiwan, five minutes in, knew it was my dress, although I had not even told her I had worked on it,” Wu recalls, sitting in his West 37th Street studio. “I had no idea how huge it became.”

Fast-forward a month: Wu’s fall show, held at Exit Art, is one of the hottest tickets of fashion week. Obama has worn Wu’s designs for several official occasions, and the sense of anticipation is comparable to a major designer show. While some in the audience may have been a little disappointed that the First Lady didn’t make it to the front row, the designer nevertheless earned plenty of accolades for the professional production and a beautiful collection inspired by Arthur Rackham’s sensual drawings of fairy tales.

“As a designer, I really had to step it up a notch and take the collection to the next level,” Wu says. “A lot happened last year and it was important for me to concentrate on the clothes. I wanted to take it up in terms of technique, and in terms of the quality of the show. “I have always planned the show to be this way,” he adds. “It was a really ambitious show for me. There couldn’t be anything amateurish about it. It had to be confident. I wanted it to be up to the standards of designers that have been around much longer. I wanted it to read that this is a brand that is in it for the long haul, one that will be around for many years. My strategy is not about just creating a splash and then be gone the next day.”

Wu is all too aware of the pressures and pitfalls that can come with the instant spotlight, and he is being particularly careful to avoid the fates of other first lady inaugural designers, like Michael Faircloth for Laura Bush or Sarah Phillips for Hillary Clinton, who made headlines and fell off the fashion radar almost immediately after the big night.

Unlike those designers, however, Wu’s star was already on the rise in fashion circles— though the inaugural gown certainly didn’t hurt. For the 26-year-old designer, nothing has really been the same since, and he is full of anecdotes about just how much his profile rose. Photographers were camped out at the Au Bon Pain cafe across the street from his studio for several days after the inauguration. When he was meeting a friend for coffee at Le Pain Quotidien on 40th Street, two young women started taking his picture with their cell phones. When he was recently enjoying a casual lunch at L’Express on Park Avenue South, he couldn’t help but overhear two women discussing Obama’s personal style. “Eventually they realized I was sitting right behind them, and one of them, who had her back to me, got out her hand mirror and held it up to see me,” Wu recounts, rolling his eyes. “It was so obvious.”

Post-inauguration, enough blooms to open a florist shop flooded his studio; Belvedere sent him “the biggest bottle of vodka I have ever seen,” he says, and almost every New York real estate company called me about opening a store. It was also widely reported that he and his partner, Gustavo Rangel, were eating Domino’s pizza on inaugural night.

“I never really eat pizza, but that night, it was our version of the Super Bowl. I thought, let’s watch the inauguration, and pizza was in order,” Wu says. “Domino’s sent me a $100 gift certificate and T-shirts.”

“There was a very obvious answer: No,” Wu says. “Everybody wanted to be associated. I have already done so much with the collection….You have to look at the bigger picture.”

Yet Wu, whose inaugural dress will soon hang at the Smithsonian Institution in Washington, admits that all the attention is also humbling. “I never saw myself as the designer who was the man-about-town,” says Wu, who, in his downtime, prefers more reserved activities like cooking, bowling and playing Nintendo Wii. “I am a designer who is seriously interested in clothing that means something. All this has really helped me focus and become a much more comfortable designer.”

It has also boosted his profile at retail. For spring, he sold his collection at more than 30 stores, including Bergdorf Goodman, Ikram (whose owner, Ikram Goldman, worked with him to dress the First Lady), Louis Boston and Net-a-porter.com. For fall, he is more than doubling his distribution, adding such stores as Colette in Paris, Harvey Nichols and Selfridges in London, Lane Crawford in Hong Kong and Beijing, Holt Renfrew in Toronto, Tsum in Moscow and Galleria in Korea. “They all recognize the brand now,” he says. “They come here knowing what to expect because of all this.”

Wu is mainly self-financed, although his father, who owns an import-export business in Taiwan, has helped him throughout the years. He launched his signature collection in 2006, but his career started more than a decade earlier. Feeling restless as a student at Loomis Chaffee School, a boarding school in Windsor, Conn., in the late Nineties, he did a favor for a friend in Taiwan who owned a toy store and cold-called Integrity Toys, a small, new Chesapeake City, Md.-based toy manufacturer with a focus on ethnic dolls, to try to place an order. “I called late one day, the president answered, and I said, ‘You know, I have some ideas,’” Wu says. “In retrospect, I don’t even know how I just told him that over the phone. I said, ‘Oh, why don’t I just send you designs because I am a designer.’ I was 16 and in my dorm room. He thought I was persistent.”

After submitting some doll ideas, Wu took the matter into his own hands, and bussed to New York to meet the company executives during a toy market. “I had never been to New York on my own,” Wu recalls. “I went to the International Toy Building, then at 23rd Street and Sixth Avenue, though I couldn’t get in because I was 16 and looked really young. The president of the company came down, and said, ‘Ah, this is who you are. You are really young.’ I have worked with them ever since.”

Wu developed a line of collectible dolls for the company, eventually becoming its creative director, and has since made limited edition dolls based on the likes of RuPaul, Amanda Lepore and Josephine Baker.

“It gave me a tremendous amount of experience,” Wu says. “It is amazing how somebody let a kid do that. It’s very niche, but very special. I have a very dedicated group of doll collectors.” Wu continued to design dolls for Integrity while he attended Parsons The New School for Design, and that helped him with the seed money for his rtw business.

While it is unlikely he will design a Michelle Obama doll any time soon, dressing the First Lady carries much emotional significance for him.

“It was really bigger in Taiwan than it was here, because it is traditionally more challenging for a male, or anybody from a creative field, to be respected,” Wu explains. “As progressive as Taiwan is culturally, it doesn’t really recognize art as a legitimate career. Not to sound negative, but culturally speaking, men were businessmen or lawyers, or in these very academic careers. The biggest reason my mother decided to move me here was because it was very obvious from the time I was five or six that I wasn’t going to be a lawyer.

“They would say, ‘You shouldn’t let a boy be drawing women’s clothes all the time,’” he reflects. “It was really frowned upon, even from family and friends. She took me away from that. I was nine and my mom moved to Vancouver with [my brother Kevin and] me for the first five years before I went to boarding school.” His father remained in Taiwan but visited the family when he could.

Times are changing though, and Wu is hopeful that the media attention will change the perception of creative careers in his homeland. “There are many little boys and girls out there who want to do it, and are forbidden to do it,” Wu says. “I remember having friends whose parents wouldn’t buy them art supplies, because, in their belief, it wasn’t going to lead anywhere, so why bother.” Nowadays, Wu tries to get back to Taiwan once a year.

Dressing the most-watched woman of our time could certainly be seen as the beginning of real change— a notion that surely resonates with the current administration. Wu hasn’t met the First Lady, but hopes to in the near future. He has already mapped the moment out in his head. “I would bow down and say thank you for changing my entire life,” Wu laughs.