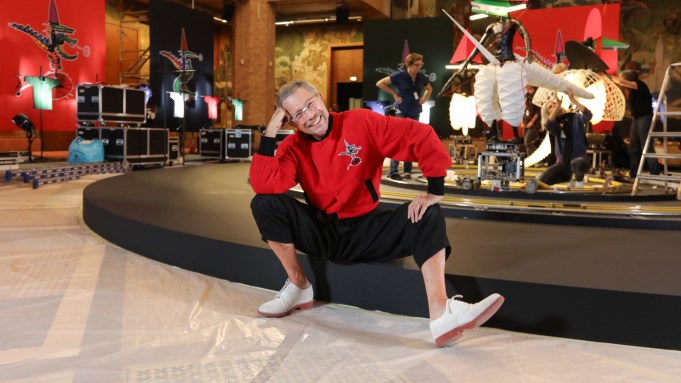 PARIS — Paris Fashion Week is in full swing and on the edge of the Bois de Vincennes in the east of Paris, in the great hall of the Palais de la Porte Dorée, home to the National Center of the History of Immigration, a production team is busy fixing a cast of crocodiles — crocs with triangular hats, human torsos and paper origami tails, nonetheless — to a circular rail, lights clamped in their mouths.

Welcome to the fantasy world of Jean-Paul Goude. On Wednesday evening, the family of articulated crocs will spring to life for the launch of the graphic artist’s collaboration with Lacoste, as the latest personality invited to redesign the brand’s storied crocodile logo for its annual “Holiday Collector” edition.

“I’m overproducing, I don’t know how to do it any other way,” said Goude, dressed in a red bomber jacket from the limited-edition line, which also features polo shirts and leather goods.

Lacoste creative director Felipe Oliveira Baptista also invited Goude to design the packaging and ad campaign for the festive collection, due to hit stores in November. He will join Goude for the event, which has been conceived like an art show.

Goude’s vibrant crocodile logos — displayed on a series of vast colored canvas screens suspended around the space — clash delightfully with the hall’s monumental frescoes by Pierre-Henri Ducos de la Haille depicting scenes from colonial France, artworks deeply familiar to Goude, who grew up in the neighborhood.

With the crocodile clock ticking, WWD grabbed Goude, who across his career has designed campaigns for the likes of Perrier, Citroën, Chanel and, more recently, Kenzo x H&M, to talk about the Lacoste project, childhood memories and beyond.

WWD: What did you want to bring to the Lacoste crocodile with your redesign?

Jean-Paul Goude: My sense of fun, my interpretation. Like for most French people, the Lacoste crocodile is a very familiar character, like the laughing cow. All these symbols were actually pre-war strategies for advertising. It’s only after the war and all the migrations of graphic artists from Europe who came to America and started Madison Avenue that things became a little more intellectual.

WWD: In the redesigned logos, one of the female crocodile characters appears to have a bubble butt.

J.P.G.: Beautiful butts, or rear ends, is something that I’ve always loved and was present in my work from when I was a kid, 16 years old. So when I was asked if I wanted to photograph another magnificent butt [Kim Kardashian for Paper Magazine], I did.

WWD: For the launch of your collaboration with Lacoste, you chose the Palais de la Porte Dorée, one of your childhood haunts.

J.P.G.: It’s very nostalgic, I have to admit. I thought I owed it to this neighborhood, to this museum, to give it my best. Something that looks like me. It’s Cubist inspiration inside a Cubist-inspired building. Let’s say that, to anybody who knows about the Bauhaus years, it’s my own homage to Oskar Schlemmer who did ballets that were costumed in a very elaborate way like this.

WWD: I read that you made friends with the son of the director of the local zoo just to get access to the animals. Across your career you have made so many powerful images around animals, like the one of Naomi Campbell racing against a cheetah for Harper’s Bazaar.

J.P.G.: It’s a fantasy of mine, it’s the beautiful woman surrounded by hostile animals and jungles. Just look at the walls here, there are allegories. My favorite is this African woman who looks a bit masculine but with very large breasts and she’s riding an elephant, which has nothing to do with the real Africa and everything to do with imagination…

WWD: But the animals…

J.P.G.: It wasn’t just the animals I was drawn to, it was the whole period. It was the post-war period when France still had colonies and I was a child, so I took it as a celebration of what is referred to as the Third World now, and foreign countries, lands that made me dream…

WWD: When do your best ideas tend to come to you?

WWD: Do you ever deliberately set how to create a shock factor in what you do? This idea of overproducing…

J.P.G.: No, it’s not that. It’s taking a project to its peak, that’s all. It has nothing to do with megalomania or anything else because I get into trouble and sometimes I have to finance my own work. In fact, I’ve done it many times, in order to get exactly what I had imagined. I cannot live with disappointment. Disappointment in something I have imagined that comes out bad makes me literally sick, ill. It has happened many times and I don’t want it to happen again. So that’s why I give the best I can.

WWD: From your life’s work, are you attached to any particular piece?

J.P.G.: No, it’s the itinerary that’s interesting and my rapport with the other. I’ve always been like that, and I’m in my seventies. Now the story is becoming much more dramatic and my frivolity seems almost decadent, but my frivolity is part of my personality.