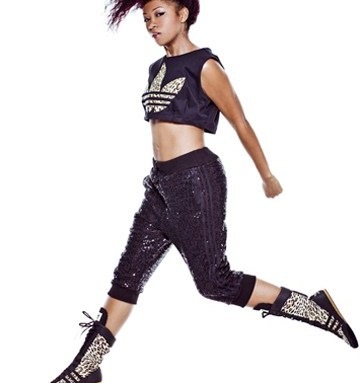 Adidas activewear is getting a shot of punk flash, courtesy of Jeremy Scott. The American designer, who will show his namesake collection in Paris on Sept. 30, has signed a multiseason deal with the activewear giant to design apparel and footwear for men and women, which will be launched in select boutiques and fashion doors on Feb. 1, 2009, and a month later in Adidas Originals stores. The collaboration is part of the Originals by Originals project, which will also include collections by streetwear designers Alyasha Owerka-Moore and Kazuki.

“It was proposed to me as complete freedom, to really do what I wanted,” says Scott, who previously worked with the company in 2002 on !- Signed (pronounced “I signed”), a sneaker collaboration that produced Scott’s cult classic money-print shoe, of which only 100 were made (according to Scott, one pair showed up on eBay with a price tag of $7,000). “I’ve been supported by [Adidas] fully with it, from the sequined tracksuit to flapper-fringe basketball jackets.” Scott, who is known for his irreverent take on women’s wear, has infused the line with a nightlife vibe; in addition to the flapper-fringe jackets, there is a sleek cropped bustier, sturdy enough to double as a sports bra, as well as a leopard-print hoodie, sequined shorts and loose-fitting sequined track pants.

“I really thought about all the things that my friends would want to wear, and a lot of my friends are pop stars,” says Scott, who moved to Los Angeles six years ago from Paris, where he had lived since graduating from New York’s Pratt Institute. “So I thought, ‘What would M.I.A. wear; what would the girls wear?’ Giant silver sequined shorts and jacket! It has a very strong look, because it’s like a disco mirror ball.”

For shoes, Scott hit upon a wings motif, extending them off high-tops “so that they flap around when you walk.” The collection, he explains, is “bright and shiny and sparkly, but you’re really completely at ease.” Kazuki’s collection, meanwhile, features sleek zip-up jackets with waterproof zippers and low-cut basketball sneakers modeled on the classic Adidas silhouette; Owerka-Moore’s line is a twist on Americana, mixing heavy cotton with vintage details on the streetwear and creating a riff on an oxford-style sneaker. Retail apparel prices range from about $45 to $450, while footwear ranges from about $120 to $250.

While it is less straightforwardly wearable than those of the other two designers, Scott says his line, which will be shown in Paris by appointment Oct. 1 through 3, is already being eyed for commercial projects. “Arianne Phillips has seen everything; she’s gagging over it,” he claims, referring to Madonna’s stylist. “Katy Perry just borrowed some stuff for a video.” As for his return to the City of Light, where he hasn’t shown since 2002, Scott is looking forward to unveiling a revamped look, clothes that mix feminine tailoring with an urban edge, the latter of which he focused on while showing in New York in 2002 and 2003. “I’m very happy to be back in Paris, it was the right decision,” Scott says. “I love the theater of it. They know I’m American, but the French ultimately see me as theirs.”