Jil Sander has decided to continue in her role indefinitely with Fast Retailing's Uniqlo. 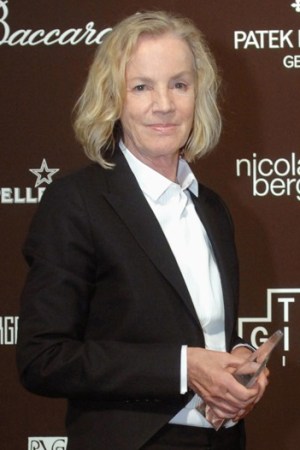 TOKYO — It’s clear to just about anyone in fashion that Jil Sander, known for her meticulous attention to detail, isn’t an easy person to please. But it seems she has finally found her ideal business partner in Uniqlo parent Fast Retailing Co. Ltd.

“They’re quite fast. They call themselves Fast Retailing,” the German designer said in an interview over tea and coffee at the Four Seasons Hotel here. More than a year into her partnership with Uniqlo, for which she has turned out two collections of her new +J brand, Sander said she is getting the support she needs to carry out her vision of high-quality basic apparel replete with her minimalist signature and affordable price tags.

“It’s very nice for me that they listen, that they understand, they go forward,” she said. “It’s almost like destiny.”

Sander, clad in a long navy coat and white shirt from +J and a pair of pin-striped pants, said she had to make a decision in January as to whether she would extend her collaboration with the Japanese brand. Although she admits it took a little time for her and her new team to forge a common path, Sander was so pleased with the first two collections and their warm reception that she has decided to continue in her role indefinitely.

“Since I’m very, very impressed with what we can do and what Uniqlo can do, I decided to go on. So I’m timeless for the moment,” she said, just a few hours before picking up the Designer of the Year award from the Fashion Editors Club of Japan at a gala dinner on Tuesday. This is the first time the club has awarded the prize to a non-Japanese designer, but Sander qualifies since she works for a Japanese company. (Burberry creative director Christopher Bailey snagged International Designer of the Year honors but could not make it to Tokyo due to the travel chaos in Europe.)

Sander provided evidence that she is already thinking about her Uniqlo collaboration beyond the upcoming fall-winter season, which will be her third collection for the company. The designer said she is looking at the possibility of launching bags and footwear at some point once she and Fast Retailing determine the proper positioning and find the right manufacturing facilities.

“At the moment, it’s just a baby. We’re just starting and we have to see,” Sander said of +J.

The designer, who is jetting from Germany to Japan every two months, said all the travel is a bit of a drain but immersing herself in her work allows her to overcome the jet lag rather quickly. That situation is set to change as Sander shifts more of her Uniqlo design work to her hometown of Hamburg. “I still have a big studio there,” she stressed.

Although she doesn’t rule out the possibility of returning to high fashion at some point, she said it’s not in the cards for now and she’s relishing her challenges at Uniqlo. The designer, who rose to fame in the Eighties and Nineties with her tailored basics crafted from luxurious fabrics, said she revels in taking a democratic approach to fashion.

“I try as much as possible to give you a great basic product and what comes out, I feel, is really amazing,” Sander said, adding she has been pleasantly surprised at the quality of many affordable fabrics, including high-tech cottons, silks and cashmere. “You don’t have to pay more to have a great form.”

She even went so far as to praise her eponymous fashion house, which she famously left in 2004 over disagreements with its then-owner Prada Group, for launching a new diffusion line of its own called Jil Sander Navy. Japan’s Onward Holdings Co. Ltd. now owns the brand she started back in Germany.

“I think it’s very zeitgeist…a reflection that is very right and is maybe also the same feeling I have,” she said. “Otherwise I never would have done [the Uniqlo collaboration].”

When the deal was unveiled last year, Fast Retailing stated Sander would oversee all of Uniqlo’s men’s and women’s apparel but in practice that has yet to happen. The designer is focusing on +J as she still comes to grips with the sheer size of the company, but said she may eventually take on other creative responsibilities. Fast Retailing expects to post annual revenue of 834 billion yen, or $8.9 billion, for its fiscal year ending in August.

“You know, it’s one family,” reasoned the designer. “So we will see for the future how we can improve, how we can [position] the whole brand in a very clear way.”

Through its small, albeit growing, network of international stores, Uniqlo enjoys a clean slate on which to build its accessible yet stylish image. Case in point: The brand just revealed plans to open its second store in the U.S. on Fifth Avenue in New York. But back home in Japan, Uniqlo has more of a utilitarian, mass-market profile. Its chain of about 780 stores has been thriving in the economic downturn but it has done so, at least in part, through markdowns and Wal-Mart-style newspaper ads.

“He’s extremely open and very modern in his vision, so this is very helpful for me. We are exchanging our skills from our different worlds,” she said.

Sander’s rapport with her new corporate backers seems to contrast sharply with her history of dramatic departures and clashes with Prada ceo Patrizio Bertelli. But the designer insists “we are on a new planet” now and she just wants to move on.

“I don’t look back at all. Especially in this case, we never had a personal disagreement. It was maybe the situation of the time,” she said of Bertelli, before changing the subject back to her current gig at Uniqlo.

“I think we built a very good relationship and that’s important,” she concluded. “It’s responsible.”