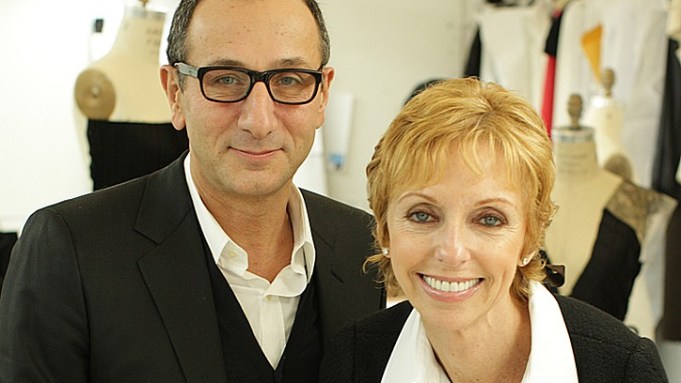 NEW YORK — When Susan Sokol joined J.Mendel as president and chief operating officer last October, she immediately saw a missed opportunity in the brand’s lack of representation at retail.

The label had only 14 wholesale accounts, including Neiman Marcus and Bergdorf Goodman, and eight shops in cities such as New York, Chicago, Paris and Aspen, Colo. Despite one of the toughest economic climates for luxury, Sokol is confident she can triple the wholesale distribution, and she has implemented several strategic moves to build a platform of growth.

“We’re approaching this from a thoughtful, strategic standpoint,” she said.

Sokol is working closely with Gilles Mendel, chief executive officer and designer, to boost the ready-to-wear and sportswear components of the label, which is mostly known for its furs and dresses. Sokol and Mendel plan to expand the range of price points to attract a wider mix of retail accounts. They want to build the bridal business; add categories like fashion jewelry and fur accessories; explore strategic licenses and restructure the operation — looking at sales, production, sample design and logistics — and tweak department setups to strengthen the overall operation.

According to industry sources, J. Mendel has total sales, including its wholesale and retail operation, of about $32 million.

“One of the first things we looked at was increasing our distribution domestically and internationally,” Sokol said. “We have a product and brand that resonates with the consumer.”

Mendel added, “The reason we connected so quickly is because she made me understand that I can grow the distribution.”

This year, the plan is to bring the number of wholesale accounts to 60, with a projected 150 doors in three years. To accomplish the goal, the company will take the collection to Paris during the city’s fall fashion week, where it will showcase the line to international retailers and press in a suite at the Park Hyatt Paris-Vendôme hotel for the first time.

The collection, which will be unveiled with a runway show Feb. 18 in Bryant Park, will feature an expanded rtw component.

“There will be a lot more daywear on the runway, and the clothes will feel more accessible,” Mendel said.

The company is seeking to widen the range of price points to attract a broader mix of retailers.

”We have traditionally been positioned at the top of the price range, which has created a more limited opportunity,” Sokol said. “The whole idea was to expand the price point to include an opening and midrange. It will have a lot of impact on our ability to grow the wholesale business. It will also have a positive impact on our retail stores.”

“In mid-June, J. Mendel will open a 600-square-foot shop on the International Designer Collections floor at Harrods in London, which will feature both rtw and fur. The shop at Hirshleifer’s at the Americana shopping mall in Manhasset, N.Y., meanwhile, will grow to 750 square feet this year from 500 square feet.

Other strategic growth opportunities include bridal, which Mendel launched about a year ago but largely kept under the radar, offering pieces by appointment at J. Mendel boutiques. Sokol hopes to wholesale the bridal collection to about 12 key bridal stores this year.

In the next year, Sokol also plans to look into licensing the brand. “Perfume would be the first one,” she said. “We are also looking at layering onto our business certain areas of accessories, including fashion jewelry, which is a category we should be in.”

During his fall runway show, Mendel will unveil a collection of fashion jewelry and embroideries designed with Subversive Jewelry designer Justin Giunta.

“He approaches jewelry in a modern way,” Mendel said. “It pushes the clothes forward, and collaborating with other designers is a wonderful, inspiring thing.”