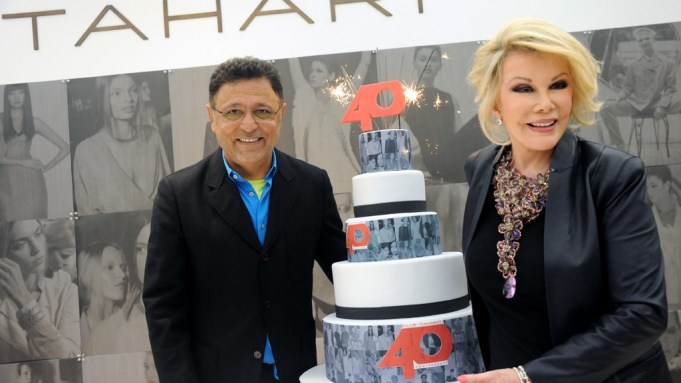 “We’re here to honor a fashion legend on the occasion of his 40th anniversary,” said city official Robert Goldrich. “Elie is a big proponent and supporter of Save the Garment Center, a nonprofit that serves to promote, preserve and save New York City as the world’s fashion capital by supporting, connecting and advocating for local factories, suppliers and designers.”

As part of his special day, Tahari donated $35,000 to Save the Garment Center from proceeds from sales of a dress he created (and sold at his boutiques worldwide ) for Season 2 of “Project Runway All Stars,” where Tahari served as judge.

Dressed in an Elie Tahari ensemble, Rivers addressed the audience. “I’m really thrilled to be here. I’d be more thrilled to be at the plastic surgeon’s, but I’m thrilled to be here. We’re here to honor [Elie] for 40 years of chic, wearable, affordable clothes that make women look terrific and sexy and appropriate, and that’s an amazing accomplishment.”

She called Tahari “truly the American dream.” She recalled how he came to New York with no money, slept on a park bench, worked hard and took every advantage he could. “He started with the tube top, and I was one of the first people to buy the tube top,” she said. “I’m still wearing it today,” added Rivers, who said it’s now a skirt that sags down her legs.

Rivers said she has gotten to know Tahari on a personal level and wears his clothes on “Fashion Police.”

“You’re such a New York American story, which is so wonderful. You’re a kind man, you’re a generous man, and I hope we’ll all be here for your 80th,” she concluded.

Goldrich read the proclamation, which said, in part, that Tahari’s founding of his company 40 years ago has helped ensure that New York remains at the center of the fashion world. “A longtime leader in the industry, this organization has introduced many pioneering designs and played an integral role in the launch of worldwide fashion trends.” The proclamation noted that the Elie Tahari label has a global presence on five continents and is sold in more than 600 stores worldwide. “Our administration continues to support New York-based designers like Elie Tahari, as well as the entire New York City fashion scene through initiatives such Fashion NYC 2020, which will help expand the industry and maintain our position as a fashion leader,” the proclamation said.

Tahari, who wished everyone a happy new year, said, “The city of New York gave me everything. I came to New York and lived in a shelter for runaway boys. I had no place to stay. I remember my first job was selling hats and gloves in Newark, N.J., outside in a bus station, and we would chase the people who used to steal our hats and gloves.”

Living and working in New York, he learned everything about fashion from the hippie days of the Seventies to back to nature, raw edge, deconstruction and high tech. “That’s what our collection today is about,” he said. But years ago it was about selling tube tops. “All of that happened in this city. I don’t know any other city in the world where this could have happened,” said the designer.

He gave a special thank you to Rivers.

“When I grow up, I want to be just like her. To be happy and make other people happy. That’s what life is all about.”