Ending one of the longest-running sagas in men’s fashion, Joseph Abboud is finally able to create collections under his own name again. 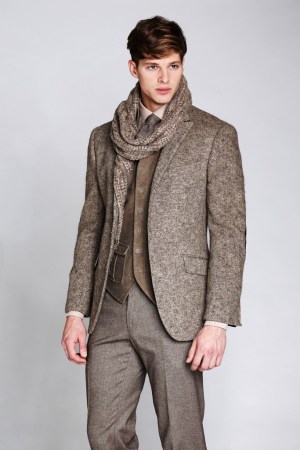 Ending one of the longest-running sagas in men’s fashion, the designer is finally able to create collections under his own name again and is launching an upscale line with Men’s Wearhouse, where he is chief creative director.

The meat of the collection, which will be more than 200 pieces strong, will be suits and sport coats that are being manufactured at the company’s factory in New Bedford, Mass. The suits are signed and numbered and are being touted as “a modern tribute to the heritage of classic men’s wear, with a sophisticated color palette, luxurious weaves and vintage fabrics.”

Abboud said the Limited Edition collection is a way to “exercise my creative juices.” There were “no limits” on the piece goods, styles or design details he could use, so he was able to produce what he believes is the “true essence of the Joseph Abboud brand” — albeit a brand that has had many essences over the last 14 years, ever since he lost control of his name in 2000.

The new line was built as a collection and the clothes “blend rather than match,” he said. Key pieces will include sepia-toned sport coats, mushroomy chalk stripes, herringbone suits and vested suits in “rich, textured fabrics. There are not a lot of flat finishes.” In its sensibility and fabric choices, the line is reminiscent of the original Abboud collection that the designer launched in 1987. He said with a chuckle: “Fast-forward 25 years and I’m back on track. It’s been an amazing journey.”

The Boston-born Abboud started his fashion career working at the Louis Boston retail store and after cutting his teeth at Ralph Lauren, launched his own brand. He sold his name and trademark in 2000 for $65 million and the brand went through several iterations and owners — with Abboud angling to get his name back every step of the way — before Men’s Wearhouse bought it for $97.5 million last August. At the end of 2012, Abboud, who filled in the gap years with stints at several labels including Hickey Freeman, joined Men’s Wearhouse at a time when the men’s wear retailer was in the midst of its own drama as it shortly after ousted its founder and chief spokesman George Zimmer in an acrimonious battle.

Since purchasing the Abboud brand, the label has grown to represent 13 percent of Men’s Wearhouse’s overall sales, which are about $2.5 billion. And the tailored clothing has yet to roll out to all stores. “We anticipate this will be a $200 million business for us by the end of this year,” Doug Ewert, chief executive officer, told WWD. And the margins are strong. “We’re value-pricing this product, so it’s not being promoted and the margins are stronger,” Ewert told analysts last month.

Ewert, naturally, pooh-poohed the prevailing wisdom at the time that Men’s Wearhouse had overpaid for the brand. “Clearly that’s not true,” he said — although the numbers will ultimately prove whether he’s right or wrong.

The ceo believes the numbers will be on his side, and that the Abboud brand can grow to between $300 million and $400 million within the next couple of years. “It’s really resonating with the customer and attracting a new customer,” he said. “And it’s selling just as well in Canada as in the U.S. It also gets us into the custom clothing business.”

Ewert said the Joseph Abboud custom offering is still rolling out but is selling well, and will be marketed more aggressively next year. “It’s a really high-quality garment, made in the U.S. that can be delivered in three weeks,” he said. Prices for a custom suit, also manufactured in Massachusetts and available only at Men’s Wearhouse stores, start at $595.

Ewert said the factory has been running at capacity for months and the workforce has been grown by 50 percent since the acquisition. And he believes it can expand further as demand for the product grows.

Although he doesn’t expect the Limited Edition offering to significantly add to the label’s bottom line, Men’s Wearhouse views it as a “halo” for the brand as a whole.

“We anticipate it will do business, but we’re not giving guidance on how much,” he said — a comment that implies it won’t be immediately significant to the company’s overall sales. “But it will provide a halo approach to the product. It’s modern, classic styling in luxurious fabrics that showcases the craftsmanship and exclusivity of the brand. And it will help position Joseph as the leading modern men’s wear authority.”

Abboud credited Ewert and his merchant team with having a “real vision” for the brand. “They perceive it as a brand, not a private label,” he said.

The Limited Edition product will be sold only on the new Web site, which is also scheduled to go live today. In addition to selling product, the site will also provide commentary. “It will be commerce and information,” Abboud said. “We will give a lot of fashion advice. We have a great marketing team and this company knows how to get a message out.” He said it won’t be a “how-to manual,” but instead will provide insight on where the fabric was made, why it has a peak lapel and the origin of a ticket pocket, for instance. And there will also be a blog.

Ewert said he’s not concerned that customers may shy away from buying tailored pieces on the Internet, even as other retailers find it difficult to do so. “We sell a lot of tailored clothing on the Web,” he said. “And if they have to come into a store to get it tailored, even better.”

Abboud agreed: “It’s unbelievable what’s sold online,” he said, “Even tailored. We think we’ll get the guy who likes the brand and wants something unique and special.

Neither the ceo nor Abboud ruled out one day adding the line to some of the company’s flagship stores. “The future is wide open,” Abboud said. Men’s Wearhouse has also hinted that it may one day open separate Joseph Abboud retail stores. But for right now, the focus is on Limited Edition, the designer’s latest attempt to make his mark in the men’s wear sector.

“Men’s tailored clothing hasn’t been this exciting since the Seventies,” Abboud said. “There’s such an energy level around it now. It makes me feel like a kid again.”