The actress and her husband, stuntman David Pope, have created a line based on the couple's love of outdoor adventure and comfortable, functional clothing. 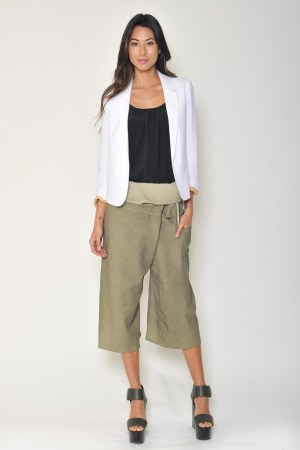 LOS ANGELES — Lest you think Basic Terrain, a new women’s wear line from actress Joy Bryant and her husband, stuntman David Pope, is a vanity project, consider this: The couple are funding the line themselves, and until recently, their dining room doubled as their office and design studio. The pre-fall capsule collection consists of low-slung, wrap-front cotton pants in two lengths and six washes.

Bryant, a former model, is no stranger to fashion, but her utilitarian husband is the one with the sewing skills. “My mom taught me how to sew when I was around 10, and I took home economics in eighth grade,” said Pope, 42. “By the time I finished middle school, I had made several pairs of shorts.”

He said fashion was never his interest; before meeting his wife, he bought most of his clothes at REI. “Me being comfortable in this space is something new. For me, getting dressed is like, ‘What goes with a compass and an ax?’”

“He’s the function and I’m the fashion. Together it’s checks and balances,” said Bryant, 39.

Pope took up a needle and thread again two years ago when Bryant found a pricy canvas hammock online. “I said, ‘I can make that.’ So I went down to Target and bought a $60 Hello Kitty Singer sewing machine,” he said.

For his next project, a pair of snow pants, Bryant bought him a better sewing machine. “When she put on the first sample, she was like, ‘Oh, you really do know how to sew.’ Then she walked to her closet and came back with 20 pieces and said, ‘Can you make any of these?’”

One of the items was a pair of Thai fisherman pants Bryant had bought during a trip to Cambodia. Pope reworked them in denim from Jo-Ann Fabrics. “From the first day she wore them out in public,” he said, “strangers were like, ‘Oh my God, where did you get those?’”

“He made himself some shirts, and the same thing would happen to him,” said Bryant. “The combination of responses was our ‘aha’ moment.”

Bryant said the line is based on their love of outdoor adventure and comfortable, functional clothing.

“Our idol brands are Patagonia, Capital and Best Made Co. If you took those three and put them in a blender, that’s Basic Terrain,” said Bryant, who looks to military and technical garb for design inspiration.

“I never thought I’d have a clothing line. If anything, I wanted to do luggage or snowboards. We dwell in cities, but we love to travel, snowboard, surf, skateboard. So we thought: Let’s start a company where we can actually do that. We either succeed or we fail, but either way we can create the things we want.”

Through her friend Kelly Cole, Bryant met Sean Hornbeak, the owner of Denim Revival, who also launched J Brand and Current/Elliott into the men’s business. Hornbeak now acts as design director and production manager. “It’s only three of us. We’re still working in David’s man cave and trying to find an assistant,” said Bryant.

While they have already designed several core silhouettes that they plan to add in gradually, the fisherman-inspired wrap pants, which don’t have hardware or zippers, will be the staple. “I think that it’s more comfortable and chic than a skinny jean, and to see that someone who is a size 4 and someone who is a size 12 can wear the same pant and both look awesome is great,” Bryant said. “They can go from yoga to office to out depending on the shoe, the jacket and the top.”

The pant comes in cropped and long versions in six washes, all made from the same lightweight cotton denim. There are just two sizes, 1 and 2, which fit a range of traditional sizes because of the adjustability of the wrap waist. Wholesale prices range from $67.50 to $84, and the company has already met with retailers such as Neiman Marcus, Intermix, Ron Herman and Curve.

The fall collection will incorporate wool, fleece, leather and perhaps even techno fabrics, but not the expected linens and silks. For spring, they will introduce a skirt and a top, with the goal of eventually expanding into a full unisex sportswear and performance gear line.

“We know where we are going, we’ll just take our time getting there,” said Bryant.

As for using her fame to help launch the line, she said, “It’s great if because of my exposure and my work, that brings attention to it, because we are making things and we want people to buy them. But I never looked at this like a celebrity line. I think the product speaks for itself.”