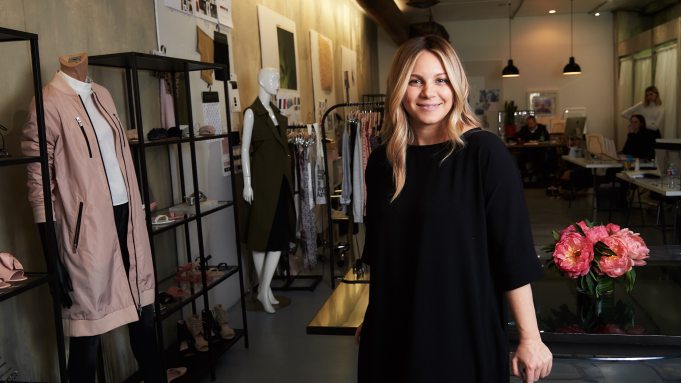 LOS ANGELES — The gritty, graffiti-filled stretch of Melrose Avenue across from Fairfax High School is best known for sneaker and jeans shops, a hangout for Millennials vibing on street fashion. It’s a far cry from the massive, all-white Vernon headquarters of BCBGeneration, where Joyce Azria used to work. But it’s here, in an old sneaker warehouse, that Azria has set up her new venture, Avec Les Filles. The open, alley-like space with concrete walls and exposed pipes feels more like a tech start-up than a fully realized brand that will launch on Feb. 1 online and in 155 Macy’s doors nationwide.

“I wanted it to feel that way even though I had positioned the company to launch at scale like this,” Azria said. “We hear each others’ conversations, the good and the bad days. It’s the essence of Avec Les Filles, where I’m literally ‘with the girls.’” Azria’s desk sits at one end of the room amidst her designers and merchandisers and assistants.

“It’s time for fashion to evolve,” said the 35-year-old, echoing the same sentiment as her father Max when he founded BCBG 30 years ago. “I want to take down all the rules and reinvent the modern fashion company.”

To that end, she’s doing away with traditional price buckets that define “junior” or “contemporary” and launching with a full collection of apparel and footwear ranging from $18 to $595 retail, with the majority of pieces under $100. “I just don’t know brands that do this. There’s still an antiquated mind-set focused around price, but I think the customer will accept it. She shops high-low,” Azria said.

“Our line looks like her closet,” she added, touching a $28 striped T-shirt, a $78 quilted jogger and $398 leather jeans. “I bet you her shoes cost more than her clothes, she has designer accessories, and she’s already cross-shopped online to know she’s getting the best deal,” she said of the Millennial shopper.

There’s a ruffled sky blue cotton blouse for $58, paired with a stretch leather skirt for $258 and laser-cut leather open-toe booties for $198. Some pieces, like a limited-edition Made in France tweed jacket for $278 or Italian leather moto jacket for $595, are definitely a notch above that what typically sells in Macy’s, but Avec Les Filles is about breaking new ground for both the retailer and manufacturer.

“It’s a very new way to approach business,” said Macy’s chief merchandising officer Tim Baxter. “Our customers respond to new ideas when they’re authentic and they respond to value, not the lowest price, and Joyce was about putting the customer first.” He said the biggest game-changer for Macy’s was Avec Les Filles’ promise to deliver new merchandise every two weeks versus the “set it out and leave it monthly idea that has defined collections.”

One of the first designer collaborations to roll out will be a premium denim capsule with Earnest Sewn for $148. As with the four Made in France jackets, special care was taken to produce unique labels and packaging for these jeans.

When Azria first pondered how to launch her brand, she knew she wanted to make fashion-forward product available to as many women as possible. “I love Macy’s because I believe they have an unlock to America by their sheer magnitude and position in real estate,” she said. “I spent a lot of time in their stores and I would see my customer there but her choices were not quite as evolved. This girl knows fashion, but there’s nowhere in her hometown to feel it, so rather than make her drive two hours to a big city to get a Made in France jacket, it’s time to bring fashion to America.”

With her ability to scale such a brand quickly, Azria is an attractive partner for Macy’s, but she said the retailer should get credit for thinking outside the box. “It’s a nod to how forward-thinking they were to be the first people who will own a brand that’s dynamic in pricing and authenticity. It’s impressive to see merchants with the biggest ship thinking about it so creatively.”

That extends to the in-store experience as well. Azria’s shops-in-shop, which range from 1,200 square feet in the Herald Square flagship to 500 square feet in other stores, is a mix of pink walls, bathroom tiles and smoky glass that harken to the Seventies and Eighties. Instead of regular white pedestals, the black mannequins are positioned on marble steps; in place of a wall rod there’s a glass cube that can sit in the middle of the floor or against a wall. Herald Square also features a pink piano and living room-like seating. “It’s not that it’s so groundbreaking, it’s that you feel like you’re in a boutique environment and you kind of forget that you’re in Macy’s,” she said of the Instagram-worthy space.

In addition to Macy’s, which will have the brick-and-mortar exclusive on all apparel, Avec Les Filles accessories will sell on Revolve and Nordstrom, and possibly Bloomingdale’s and Shopbop.

“I want to have a vehicle to share my vision of fashion with America. Our door locations will allow me the ability to interact with girls from everywhere who are starved for a creative point of view just because of where they live,” Azria said. “In turn it will have commerce and reach in terms of its earnings, but it’s coming from the heart.”