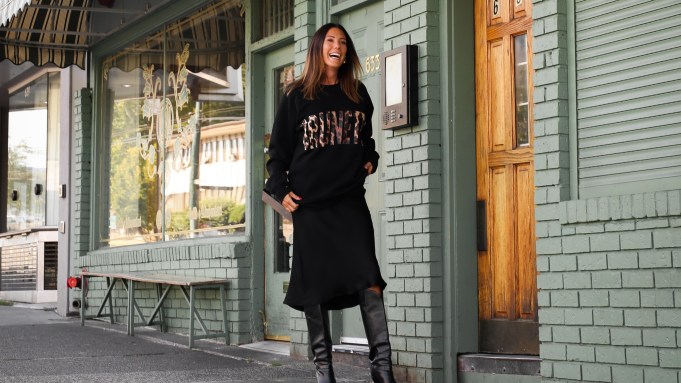 TORONTO — Vancouver Fashion Week serves up a noteworthy debut on Thursday as Brunette the Label takes to the runway to unveil its first collaboration with Juicy Couture.

Known for its message of inclusivity and its Fab Brunette and Babe logoed crewneck sweatshirts, the limited-edition 10-piece collection features the brand’s most popular styles reimagined with Juicy Couture’s classic Gothic font and signature details, as well as an homage to its popular pink, zip-up velour tracksuit.

“My fascination with Juicy Couture started when I bought my first tracksuit in college. Three out of the four people who spoke at my wedding said you’d always find me in my Juicy Couture tracksuit,” said Brunette founder, chief executive officer and creative director Miriam Alden, whose brand launched in 2014 and is sold in more than 700 retail partners in Canada and the U.S.

The collaboration began in February 2018 because of the sighting of a big pink neon sign bearing the words “Babes Supporting Babes” — Brunette’s signature catchphrase.

Exhibited in Los Angeles, the brand’s promo was transferred to Project Las Vegas for display at the trade show. Three days later, one of the senior directors of partnerships from Juicy Couture’s parent Authentic Brands Group passed by Alden’s booth. “He saw the sign and loved it and our product,” said Alden.

Discussions followed about working with Juicy Couture. “It was only supposed to be a Canadian collaboration. But it will now be sold at Juicy Couture’s store in New York City,” said Alden, as well as its location at John F. Kennedy International Airport airport, online at juicycouture.com and brunettethelabel.com, and 100 brick-and-mortar retail locations across Canada.

“This collection is mutually authentic,” said Alden, whose new retro velour tracksuit — a first for the brand — features a custom tape that says “Brunette [Hearts] Juicy” in Juicy Couture’s signature font inside the neckline and up each pant leg.

The collection will grow into lightweight pieces and dresses for spring 2020 and plans are in place “to move forward for spring as more of an international collaboration,” added Alden, who hopes to see Brunette in 400 U.S. stores by the end of 2019, as well as expand its growth in Australia — where it launched last year — and venture into Europe and England in 2020.