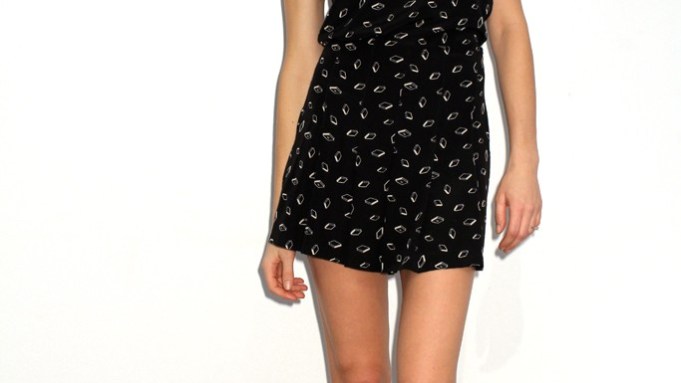 For the first time in its 95-year history, Keds is introducing sportswear, which will make its debut on Black Friday exclusively at Opening Ceremony.

The men’s and women’s clothes are pretty much what one would expect from a nearly century-old American brand that specializes in canvas sneakers — basic, understated and faintly preppy. The collection, which consists of about 85 styles, came together through a licensing deal with LF USA, a subsidiary of the Hong Kong-based Li & Fung Ltd. Keds is a division of Collective Brands Performance + Lifestyle Group.

Rick Darling, president of LF USA said, “Keds is a great addition to our portfolio of fashion brands. We look forward to continuing our long relationship with Collective Brands, as we extend this iconic American brand into the apparel category.”

The limited edition Keds resort collection will be sold at Opening Ceremony’s stores in New York and Los Angeles, as well as through its Web site. The plan is to roll out Keds apparel to specialty stores and high-end department stores for spring. T-shirts, sweaters, pants, skirts, dresses and jackets are among the offerings, with retail prices for the inaugural looks retailing from $48 to $400.

Darling and Keds brand president Kristin Kohler Burrows declined to comment on first-year projected volume. Keds decided to enter apparel because Li & Fung was interested in building the business in the right way rather than rolling it out big initially, Burrows said. “Right from the get-go, they understood the meaning and essence of the Keds brand,” she said.

Emphasizing how Keds have been worn by many notables over the years including Marilyn Monroe, Jackie Onassis, Paul Newman and Humphrey Bogart, Burrows said the company will continue to feed products to celebrities though some need no prompting, Burrows said. Kristen Stewart and Natalie Portman are a couple of the young actresses who have been spotted wearing the brand.

To try to create some buzz during Art Basel in Miami, Keds sportswear will be sold in a pop-up shop in the Vogue lounge at the Sagamore Hotel. There will also be style advisers on hand to help visitors create a signature look, said Laurie Heller, brand marketing manager for Keds. And on Dec. 6, Keds will welcome about 40 bloggers to its showroom to style looks that they can later blog about.

Keds apparel will also be featured in the brand’s 2012 advertising though executives declined to comment on the investment.

The company did have a hand in creating a major pop culture trend. First unveiled by the U.S. Rubber Co. (what is known today as Uniroyal), Keds rubber-soled shoes caught on quickly. In 1887, the term “sneaker” first appeared in print to describe Boston school children’s tennis shoes. But, it was a 1917 Keds ad that referenced how sneakers allowed wearers to sneak up on unsuspecting friends that helped make the word part of the public’s vernacular.

As for LF USA, licensing is a fundamental part of its growth plan. “We are always looking to extend our portfolio into other brands, and we expect to announce other details in the future,” Darling said.