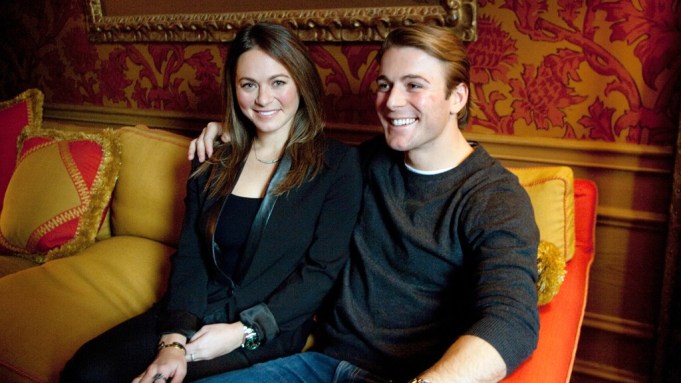 NEW YORK — Nan Kempner’s renowned taste can be seen all over her family’s Upper East Side apartment.

A sculpture of her younger self, a few paintings by René Magritte, the Robert Graham bronze bas-reliefs she bought after a studio visit and art books galore hint at her well-designed life. But first and foremost — beyond her socialite status, lively dinner parties, perfectly appointed Park Avenue home and her carpe diem way to be — Kempner was known for her trove of designer clothes.

Now, eight years after her death, Meggie and Chris Kempner, two of her grandchildren, are launching a sportswear collection — aptly called Kempner and inspired by her unmistakable style but reimagined as if she were an on-the-move young woman living in New York today. The two were born 22 months apart. Chris, 29, is a Yale graduate who worked in finance for five years at Loeb Capital Management, Oak Hill Capital Partners and Goldman Sachs, and is four months away from getting his M.B.A. at Harvard. After graduating from the University of Pennsylvania, his sister started out in public relations at Full Picture before getting into fashion as a stylist at Ralph Lauren. In a partnership that appears very much to be a left-brain, right-brain sort of combination, he handles the financial side and she is all about the creative.

While a stream of models, a stylist, a photographer, a videographer and other creative types swept through their grandmother’s duplex, the pair took a breather from a photo shoot to discuss their new business. Their parents, Jamie and Cynthia, also passed through at one point for a little extra moral support — not that their children appeared to need any. Much like the customers they aim to dress, the brother-sister team come across as confident and charismatic with their own sense of style.

For inspiration, Meggie Kempner trekked to the Metropolitan Museum of Art’s Costume Institute to study the couture pieces that once hung in her grandmother’s closet. Nan Kempner’s couture collection was so vast the museum re-created her Park Avenue closet and showcased some of her designer gowns in its “American Chic” exhibition, which opened in 2006. Said to have missed only one runway season in 55 years, Nan Kempner was not only a muse of the late Yves Saint Laurent but a fashion authority in her own right. So much so that Diana Vreeland once said, “There are no chic women in America. The one exception is Nan Kempner.”

But Meggie and Chris Kempner are leaving the couture ballgowns behind for their collection, which features versatile printed wool miniskirts, tank dresses, a black-and-white two-tone goat fur coat, slim-fitting pants and double-breasted blazers. The Kempner label leans on more casual pieces that can easily be mixed with designer labels — something their grandmother championed before it was considered fashionable to do so. Sweden Unlimited shot the line for a look book and a video, using a Red digital camera for the latter, which combines still shots with video so that the model will appear to be wearing different outfits as she moves in the video. It will retail from $400 to $700.

Recalling ski trips to Vail, Colo., Chris Kempner said with a laugh, “You’ve never seen so many variations of a ski outfit. She would wear the tightest-fitting Lycra stretch pants with no functional warmth property whatsoever, which meant we were constantly taking breaks for hot chocolate. She would have her beautiful fur-lined and fur-trimmed Bogner ski jacket that zipped from the neck to midquad and the biggest fur hat you have ever seen. And the luggage…”

In a 1999 Town & Country article, Nan Kempner described her look as “artificially relaxed. It takes a lot of work to look relaxed. I’ve always liked being noticed, and I work hard at it.”

Having served as a contributing editor for French Vogue, a fashion editor for Harper’s Bazaar, a design consultant for Tiffany & Co. and an international representative for Christie’s, Nan Kempner left tracks professionally and personally. Her grandchildren laughed remembering how she loved to pick out their outfits when traveling or weekending together. “‘Tell’ is a light word — with me, she just ordered,” Chris Kempner said.

The brand’s logo features four Ks — one for their grandmother, two for the entrepreneurial siblings and a fourth for their sister Nina, an art history major at Yale whom they hope will join the fold. The 30-piece line is being made entirely in New York’s Garment District. Launch Collective is showing the Kempner label from its 495 Broadway offices, and selling select designs in its boutique there. Industry sources said Kempner aims to generate $3 million in its first year in wholesale volume. The company is also said to have corralled “a seven-digit figure for funding from friends and family.”

While her grandmother’s whippet-thin frame was said to be the impetus for Tom Wolfe’s “social X-ray” moniker in “Bonfire of the Vanities” and Valentino once praised her “body like a hangar,” Meggie Kempner’s take on sizing is more all-inclusive. “Our collection is for a working girl who is in shape with a normal body,” she said, adding that she and her brother quiz friends all the time about their favorite pieces and what’s missing.

During the photo shoot, models and members of the production team couldn’t resist picking up some of the baubles that were lined up on the canopy bed in a guest room. A weighty necklace laden with ruby and emerald beads that Nan Kempner bought in India, a laticelike gold Verdura cuff and Hermès leather bracelets and belts all drew nods of approval. “I have a very big bag today,” one model said mischievously.

The diamond pinky ring that Kempner wore day in and day out was another point of attraction. Set in 18-karat gold with a brandished stainless steel ring, the sizable Taffin sparkler was what remained of a pair of earrings. Meggie Kempner said her grandmother lost the other diamond earring in the surf, and her father was tasked with a two-hour salt water search. On another occasion, when intruders broke into the family’s apartment in the Seventies and tied up Nan Kempner, she still had the wherewithal to hide a JAR diamond earring in her mouth.

Not surprisingly, accessories will be added down the road, and whenever their first fragrance is introduced, it will simply be called Nan. For a launch party in March, the duo will host a dinner in the apartment that Michael Taylor, Billy Baldwin Sr. and Mark Hampton each had a hand in the design of. There was even talk of bringing her longtime cook, Sylvana, out of retirement to introduce a new generation to her bacon-wrapped bread sticks and spaghetti dinners. Meggie Kempner said, “It’s gotten to the point where we talk about work so much that we will sometimes stop and say, ‘By the way, how are you?’”

The siblings agreed their grandmother would be proud that they have followed in her footsteps workwise. “Obviously, we wish she could be here to see it all and to wear it all, but we believe she is in spirit,” Meggie Kempner said.