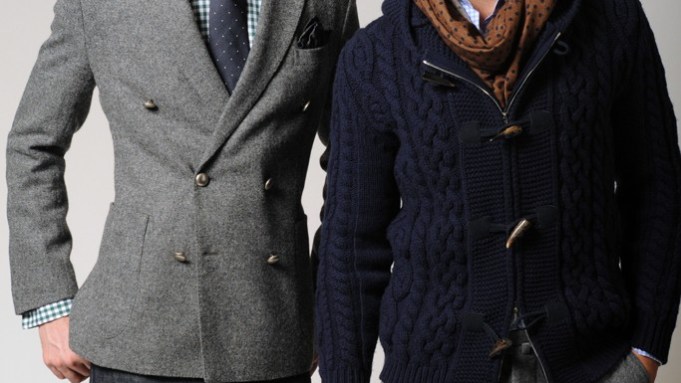 The former fraternity buddies have partnered to relaunch the venerable Kent & Curwen brand in the Western Hemisphere, and they have some serious backers: manufacturing powerhouse Li & Fung Ltd., and designer Tommy Hilfiger.

The label, which was founded in 1926 by Eric Kent and Dorothy Curwen, is owned by Trinity Ltd., a Hong Kong-based retailer of luxury men’s wear brands. Trinity signed a license with British Heritage Brands LLC, a joint venture between Li & Fung USA and Star Branding LLC, a company owned by Hilfiger and several associates, for the U.S. and Europe.

The fruits of that deal will be unveiled for fall 2013 when Kent & Curwen begins shipping an elevated collection of tailored sportswear that speaks to the brand’s heritage but modernizes it for a contemporary customer. The complete range includes everything from velvet tuxedo jackets and down outerwear to selvage jeans, sweaters, sport coats, pants and neckwear.

Kent & Curwen began life as a manufacturer of cricket sweaters and repp ties for colleges in the U.K., including Oxford and Cambridge. It was also embraced, during the golden age of Hollywood, by actors such as Cary Grant, Errol Flynn, Douglas Fairbanks Jr. and others. The brand disappeared from the scene in the Eighties and went through several hands before landing with Trinity. Today, Trinity, which is owned by Fung Retailing Ltd., a privately held entity of the Fung Group, operates more than 100 Kent & Curwen stores in Asia. There is also a unit in Piccadilly in London.

“Our tag line is ‘Heritage With the Dust Blown Off,’ ” said Reynolds. Although the “lion jack” logo incorporates the lion from the royal herald and the Union Jack flag, and many of the details harken back to its beginnings, the collection has an updated feel. Navy blazers are short, jeans are trim, suits and sport coats are slim. “We don’t want to be too literal,” he said. “We want to embrace our past but not be bound by it or be too costumey.” The goal, Reynolds noted, was to move the collection from “the life of sport to the sport of life.”

Kent & Curwen recently set up a showroom at the Trump Tower in Manhattan, across the hall from Star Branding, and will begin showing the collection to better department stores in January. “We’ve had a great deal of interest,” said Sondag. “We think the idea of a British brand invasion is long overdue.”

Sondag knows a thing or two about British brands; he just left a post as creative director at the London-based Hackett, a position he held for eight years. Before that, he spent 14 years with Tommy Hilfiger, launched Victorinox and was design director at Timberland. He also worked for Burdines, where he brought in Reynolds to serve as men’s designer buyer. Reynolds, too, spent 14 years at Hilfiger, and then launched the apparel division of Converse.

“I wasn’t looking to leave Hackett,” said Sondag. “I was happy, but this just came up and sounded like an amazing opportunity.”

In addition to the wholesale line, Kent & Curwen is also going deeper into retail. “We’re going to open at 2 Savile Row, next to Gieves & Hawkes,” said Reynolds. Gieves & Hawkes is also owned by Trinity. The Kent & Curwen store will have “elements of a haberdashery but with a modern interpretation.” The 1,800-square-foot store is slated to open around Sept. 1. British Heritage Brands will also take over operation of the Piccadilly store, which will “get a facelift,” Reynolds said. The company is also scouting for a location on Madison Avenue in New York City. “We want to be in the windows of the world, and Madison Avenue does that,” said Sondag.

To introduce the brand to market, the company has hired Laird + Partners to handle its advertising and marketing. Social media will also be part of the equation.

Interestingly, when the duo met with Trinity executives three weeks ago to show samples from the first collection, the line was so well received that the Asian parent has committed to carrying a Field Green Collection capsule in its top Kent & Curwen locations in Asia. “That wasn’t our intention,” said Reynolds. “In Asia, Kent & Curwen is more focused on tailoring, but it has a strong customer base and luxury price points, so the synergies are quite good.”